Twenty-three years ago the Tiananmen Square protests were in full swing, and freedom lovers around the world hoped that some light would soon break forth in the dark land of China. But tragically it turned out to be a massacre, and the push for freedom and democracy was mercilessly crushed. 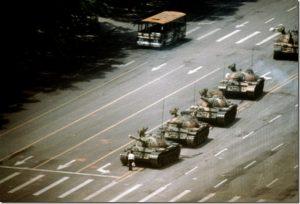 Hopefully none of us have forgotten those stirring moments. I recall watching these images on television back in the US. It was riveting viewing. We all so hoped that a real revolution of freedom would take place there. A few months later we did see it happen elsewhere, as we witnessed the wall come crashing down in Berlin.

But it was not to be in China. The most famous photos of all of course featured the lone protestor standing in front of a column of oncoming tanks. Incredibly those tanks – which could have crushed him in a second – slowed and veered. The power of one!

When we study history we see that this is often the case. One committed individual can change the course of history. One person with courage and conviction can transform the course of human events. A handful of sold-out world-changers can be unstoppable.

Our primary example of this is one solitary figure who lived 2000 years ago. We still are greatly impacted by this one man. Consider this piece attributed to Dr James Allan in 1926:

He was only thirty three

His friends ran away
One of them denied him
He was turned over to his enemies
And went through the mockery of a trial
He was nailed to a cross between two thieves
While dying, his executioners gambled for his clothing
The only property he had on earth

And because of this one great man, a ragtag bunch of misfits changed their world. Consider what was said about the early followers of Jesus: “These who have turned the world upside down have come here too” (Acts 17:6, KJV).

And think of all the other world changers, such as Paul, or Athanasius, or Luther, or Finney, or Wilberforce, or Chesterton, or Lewis, or Mother Teresa, or Bonhoeffer, or Charles Colson.

The power of one person – or a small group of persons – to impact history is something we find time and time again – for good or ill. Think also of the destructive influence of a Nietzsche or a Lenin or a Hitler. Great voices both current and past have made the same remarks about the power of one:

“Never doubt that a small group of thoughtful, committed citizens can change the world…indeed, it is the only thing that ever has” Anthropologist Margaret Mead

“The greatest works are done by the ones. The hundreds do not often do much – the companies never; it is the units – the single individuals, that are the power and the might. Individual effort is, after all, the grand thing.” Charles Spurgeon

“Never worry about numbers. Help one person at a time, and always start with the person nearest you.” Mother Teresa

“The power of one man or one woman doing the right thing for the right reason, and at the right time, is the greatest influence in our society.” Jack Kemp

So let’s go about the business of changing the world. Remember, you plus God are a majority. So go and change the world for the glory of God.

9 Replies to “The Power of One”