As one who gets a regular – even daily – share of abuse and hatred, I can certainly relate to what we are told in Scripture and what we read about in church history. Whenever the gospel of Jesus Christ is boldly proclaimed, there will always be violent opposition and persecution. Yet many believers seem to deny this altogether.

One of the more annoying things of living in these PC days is how many believers who should know better have simply drunk deep from the surrounding ungodly culture. They have imbibed big time of all the completely non-Christian foolishness around them. They have soaked in all the silly notions of tolerance and acceptance which are rampant in a morally relativistic culture, and embraced them wholeheartedly.

The worldlings say we should never judge, or be too sure of anything, or claim that there are absolutes. These gullible and lukewarm Christians simply buy all this without thinking, without lining it up with the word of God. Thus I get Christians attacking me on a regular basis, saying I am being too forthright, too assured, too black and white with my faith.

They think I am unnecessarily offending people and alienating people because I speak truth unflinchingly. They want me to tone down, to ease up, to back-pedal, and to lighten up. They think I should never be causing any offence, and that if I am getting all this angry opposition, I must be doing something wrong.

Sorry, but I am just not buying it – not for one moment. It is impossible to read the New Testament without seeing warnings and examples of how the world will hate a true follower of Jesus Christ. It is guaranteed to happen, no matter how nice or loving or gracious we seek to be. Consider just a few such passages – without any commentary – about the warnings and promises made by Jesus about this:

The disciples also made such warnings. Here are just two of them:
-2 Corinthians 4:8-10  We are hard pressed on every side, but not crushed; perplexed, but not in despair; persecuted, but not abandoned; struck down, but not destroyed. We always carry around in our body the death of Jesus, so that the life of Jesus may also be revealed in our body.
-2 Timothy 3:12 In fact, everyone who wants to live a godly life in Christ Jesus will be persecuted.

And the early church knew full well about the world’s hatred and opposition. The book of Acts tells one story after another of persecution, hatred and worldly rage as the disciples preached the gospel. Indeed, in my daily reading in Acts I have come upon many such examples. Consider just one, found in Acts 23:12-15:

“The next morning some Jews formed a conspiracy and bound themselves with an oath not to eat or drink until they had killed Paul. More than forty men were involved in this plot. They went to the chief priests and the elders and said, ‘We have taken a solemn oath not to eat anything until we have killed Paul. Now then, you and the Sanhedrin petition the commander to bring him before you on the pretext of wanting more accurate information about his case. We are ready to kill him before he gets here’.”

Wow, that is real hatred and opposition. And the book of Acts is full of such satanic persecution and enmity. No matter how Christlike or loving or gracious you may be, Satan hates the gospel and he will inspire his own to attack with demonic rage anyone who dares to preach it. 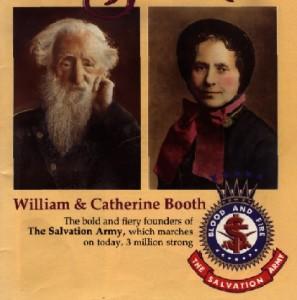 And of course church history is replete with examples of this same truth. Whenever the gospel has been proclaimed in power and with authority, the world has hated it, and sought to stop it. There are countless examples of this happening during the past 2000 years.

Let me offer just one. I am just now reading a bunch of biographies on William and Catherine Booth, the founders of the Salvation Army. Boy, talk about persecution, talk about the world hating you. They got it big time. Because they bravely proclaimed an undiluted gospel with Holy Ghost boldness, they were met with real hatred and opposition.

They experienced persecution as a regular part of their work, yet kept on going. Indeed, just as always has been the case, they experienced demonic rage and bloody persecution coming straight out of the pit of hell. How else does one explain such horrible vitriol, scurrilous abuse, and ugly hatred?

“The Booths’ message of total surrender and radical obedience to God attracted great criticism, especially in the early days. To many in the established churches, the call for no compromise, no holding anything back, no denying God in the small things, was too serious and too difficult to obtain.” (p. 121)

“William and his helpers soon got used to the disruptions caused by drunken roughs during their open-air meetings…. They did not always come away from their open-air work unharmed. Anything opponents could find was thrown their way, and often they hit the mark. On many evenings, William would trudge the eight miles to his Hammersmith home, arriving weary and battle-scarred, his clothes stained with blood or rotten fruit and his body bruised. This was the price they had to pay as they sought to save the worst of sinners – a price they never considered too high.” (p. 125)

“‘Make your will, pack your box, kiss your girl, be ready in a week.’ The general’s orders were clear. The level of commitment required of his workers was unmistakable – radical obedience was essential. Nothing more and certainly nothing less. Only godly go-ahead daredevils were equal to the call.” (p. 150)

Of course they got just as much flak from the comfortable, carnal and compromised church of the day as they did from the non-Christians. Both were hard to take:

“Just as they were willing to weather the storms of unfavorable public opinion, the early Salvationists were prepared to bear any cost to see salvation come to ordinary men and women like themselves. However, as the work of the Army expanded, the disruptions and attacks against them began to take on a more serious and sinister form. Their willingness to pay the price was regularly tested to the limit….

“Preaching on the streets was at times like preaching in hell. Teams of Salvationists faced ridicule, scorn, and hatred as they proclaimed the gospel in the degraded slums. Many of the poor and destitute were strongly atheistic, hating the name of God and fiercely opposing those who spoke of any form of religion.”

And just as in the book of Acts, whenever the preaching of the gospel affected any money-making schemes (see for example Acts 16:16-40; 19:23-41), all hell broke loose:

“By 1880 this holy Army was attracting severe opposition. Those who stood to lose the most from their success became their greatest enemies. Hotel and brothel owners faced falling profits as their previously thriving businesses began to suffer. The escalating conversion rate of many of their most loyal customers was plainly evident.” (pp. 177-178)

So these pub and brothel owners regularly recruited and organised violent gangs to assault and stop the Salvos from marching in the streets or holding their meetings. It was an all-out war, and there were many real casualties.

“Tragically greater injuries were also to follow. In Guildford that same year the wife of the corps officer was kicked to death. A fellow woman soldier was so severely beaten during the same parade that she also died some days later from the wounds she sustained. It is difficult to imagine this degree of persecution of Christians occurring in a ‘Christian’ nation such as Britain in the nineteenth century.

“In Whitechapel, East London, Salvation Army lasses were tied together with rope and pelted with live coals. It was not uncommon for parades heading for the evening meetings to be showered with tar and burning sulphur. ‘Blood and Fire’ became a reality for this army of God, unfortunately not only in the way originally foreseen.” (p. 183)

A couple of things clearly stand out here. One, just what sort of Christian life are we living? Are we friends with everybody and does everyone just love us to pieces? If we are not getting any opposition or rebukes, then we just might need to ask ourselves if we are really living the genuine Christian life.

Two, no matter how loving and gracious one might be as a believer, the world will always hate us. Jesus promised it and experienced it, as did the early church and all true believers throughout the ages. It is simply part of our job description.

Three, modern-day believers need to repent of their cowardice, apathy and worldliness. They especially need to repent for their armchair criticisms and unbiblical attacks on those who are daring to stand up and be counted for Christ and the Kingdom.

The religious establishment attacked Jesus and the early believers. The worldly, compromised church attacked the Booths and the Salvos. And they still attack anyone who stands up boldly proclaiming Christian truth today. They will one day stand before their Judge to give an account for this.

In the meantime we must press on and be willing to suffer gladly for Christ’s sake. As Catherine Booth said in Aggressive Christianity: “Opposition! It is a bad sign for the Christianity of this day that it provokes so little opposition. If there were no other evidence of it being wrong, I should know from that. When the Church and the world can jog along together comfortably, you may be sure there is something wrong. The world has not altered. Its spirit is exactly the same as it ever was, and if Christians were equally faithful and devoted to the Lord, and separated from the world, living so that their lives were a reproof to all ungodliness, the world would hate them as much as it ever did. It is the Church that has altered, not the world.”

27 Replies to “They Will Hate You”