There have been a number of firsts in my life as of late. Let me begin with the frivolous and inconsequential. I recently turned 60. That is a first – and last for me, obviously. And being in Hawaii at the moment, I discovered that the family restaurant chain Denny’s is also celebrating its 60th birthday.

Yesterday I also experienced a first: my first maple bacon sundae – at Denny’s. I also could have had a caramel bacon brownie, or a maple bacon milkshake. Americans like to eat – and they like their bacon. But all that, as I say, is of little consequence.

There were however a few consequential firsts as well. Today was the first time I have been to Pearl Harbour. I had been to Hawaii before, but never to this historic war memorial. It was a moving visit, and as is often the case, spiritual lessons raced through my mind.

One such reflection was this: There are many believers who get quite squeamish about associating Christianity with militarism. They seem to think that anything having to do with fighting or conflict or warfare is somehow fully at odds with their faith.

But they are mistaken. The Bible is full of military imagery from start to finish. Yahweh is a warrior in the Old Testament (Exodus 15:3), who fights for Israel (and at times fights against her). Indeed, in this chapter we find the Song of Moses, wherein God’s people rejoice and exalt in the destruction of their enemies.

In the New Testament of course it is the spiritual battle which is emphasised, but military imagery nonetheless abounds. Here are just a few of many such texts:

-1 Corinthians 14:8 Again, if the trumpet does not sound a clear call, who will get ready for battle?
-Ephesians 6:10-11 Finally, be strong in the Lord and in his mighty power. Put on the full armor of God so that you can take your stand against the devil’s schemes.
-1 Timothy 1:18 Timothy, my son, I give you this instruction in keeping with the prophecies once made about you, so that by following them you may fight the good fight,
-2 Timothy 2:3-5 Endure hardship with us like a good soldier of Christ Jesus. No one serving as a soldier gets involved in civilian affairs—he wants to please his commanding officer.

And in the book of Revelation we see literal, physical warfare, with king Jesus leading the charge (see Rev 19:11-16 for example), with real warfare, real enemies, and real blood being shed. The Bible does not shy away from this when it speaks of a God who brings justice and vengeance to bear on a sinful and rebellious world.

And many of the character traits of the warrior are in fact praiseworthy, even godly traits. Courage, valour, perseverance, longsuffering, endurance, comradeship, sacrifice, and heroism are all displayed on the field of battle, and they are all positive characteristics.

We needed brave and heroic young men to win our freedoms in the Second World War. Moreover, these were just boys really: 19 and 20-year-olds. As I watched a short video of American youth going to fight the Japanese I shed a few tears, realising that I have boys that age.

In a time of war I might have to be asked to give up my own sons so that tyranny and oppression can be fought, and freedom secured. What a sacrifice. What a great cost. And of course so many millions of young men did give their lives for the cause. They knew they had to fight. They knew they had a job on their hands, a mission to accomplish.

Obviously Christians do too, at least in the spiritual realm. We are asked to lay down our lives, just as our commander-in-chief did for us, because so much is at stake, and the price is too great to sit back and do nothing. We are asked to renounce all and sacrifice self for the good of the cause – for the glory of God and the salvation of men. 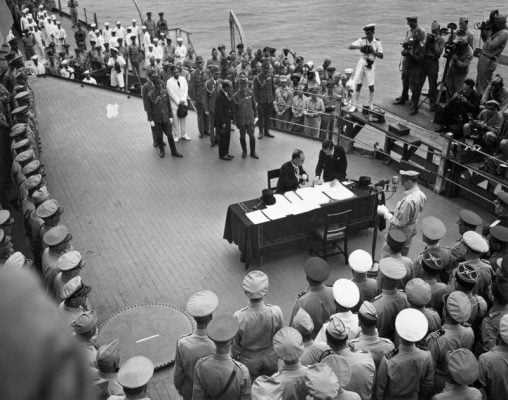 There is no higher and more worthy calling than this. And it is a battle. It is a fight. It is a war. We all must be involved in this conflict. No one is allowed the luxury of sitting on the fence when such momentous battles are waging.

A final lesson that sunk in today occurred when I was walking around on Big Mo: the USS Missouri. This great battleship only entered the war effort late in the game, but it was (and is) a remarkable vessel. Its main arsenal consists of nine 16-inch guns, capable of firing 2,700 pound armour-piercing shells 23 miles with deadly accuracy.

I used to have a plastic model of this ship when I was a boy, and I have always been fascinated by it. It was commissioned in 1944, and saw action in the Korean War and Gulf War. It was finally retired in 1992, and is now docked in Pearl Harbour.

It may be most well known for the role it played during the end of World War II. On September 2, 1945, after Japan finally realised it could not win the war, a surrender ceremony took place on board. Plenty of major military leaders were there, along with the surrounding Japanese officials.

A 23-minute ceremony marked the official end of the war in the Pacific. Berthed in Tokyo Bay, leaders signed the declaration of surrender on the decks of this great ship. General Douglas MacArthur was there, along with the Japanese foreign minister. Today I stood on the very spot where that historic signing took place so long ago.

It was the decisive and sure end to conflict, and the beginning of peace. My mind of course immediately thought of another such day in the future, when King Jesus comes to earth again to establish his rightful reign. Complete surrender will then take place amongst rebellious mankind, even if begrudgingly.

The entire cosmos will then know who is the one true living God, and who are the conquered. It will be the end of a very lengthy and bloody war, and the beginning of a universal reign of peace and justice. As great and majestic was the ceremony on the USS Missouri, it will pale in comparison to that final day when all God’s enemies are put down, and Jesus takes up his rightful rule and reign.

It will be a glorious day to be celebrated throughout eternity. Until then of course we continue to be at war. The spiritual powers of darkness are still doing all they can to thwart God’s purposes, and to discourage God’s people. But we must keep fighting on, knowing that the day of full surrender is not far away.

It is that knowledge of our ultimate assured victory that sustains us during these difficult days. So keep fighting my friends, and if you need a more visual, graphic illustration of our spiritual battle, do yourself a favour and go visit Pearl Harbour. It will move and inspire you greatly.