I believe it is not amiss to suggest that biblical discernment may be at an all-time low in the contemporary church. Our ability to think biblically about what is taking place in our world and in our culture seems to have largely disappeared. Instead, tragically many believers think pretty much just as the world thinks. 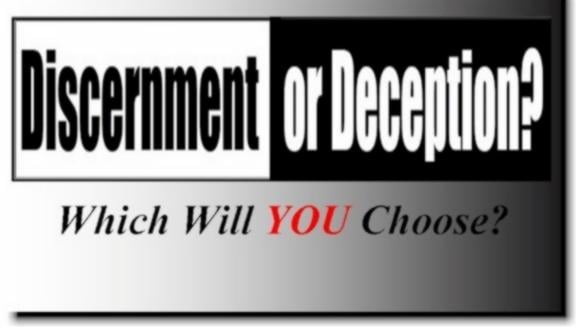 We are not able to offer any prophetic words to challenge the current secular culture because we have for the most part absorbed and embraced that culture. Instead of being salt and light, we have become a poor reflection of everything found in the world.

We do not really know the Word of God, or have a basic grasp of Christian doctrine and fundamental theology. Our biblical illiteracy means we have a hard time thinking biblically, and offering true biblical discernment. Thus we just go along with what the world offers, assuming that going to church once a week somehow makes us great Christians.

Thus biblical discernment has taken a nosedive. The examples of this are legion. I encounter it all the time, and it grieves me mightily. So many people who have been believers all their life, been to church all their life, and may even have parents who were pastors or church leaders, seem to be devoid of a basic understanding of what Christianity is all about.

The obvious examples include things like capitulating to the radical homosexual agenda, and caving in on God’s design for human sexuality, marriage and family. But plenty of lesser indicators can be cited here. As one example, I will often be told by other believers that they support noted individuals or organisations which are involved in helping others, especially overseas.

Yet when I point out to them that the same individuals and organisations are in fact a very mixed bag, promoting things like abortion and other anti-life policies, they will not only admit to not knowing this, but go on to say they will still support such people and groups!

I even had one couple once tell me they prayed about this, and felt God wanted them to continue financially supporting one such organisation! I was tempted to reply, “OK, so let me get this straight: you prayed, and God said to you: ‘Yep, that is just fine; keep on supporting the murder of new life which I have created. I am quite alright with all that’.”

We have here a clear case of subjective feelings trumping the plain teachings of Scripture. They “feel good” about continuing with this support, even though they now know they are contributing to the death of many unborn babies. So what will they say to God when they stand before him one day? “Well, we felt good about it”?

Biblical discernment in such cases is altogether missing. And it does not get much better by those who claim to be good students of Scripture. The other day I encountered two examples of those who do not seem to have a clue about what Christianity is all about, even though they proclaim their great biblical knowledge.

The first one insisted that C.S. Lewis was an “unsaved Modernist” because he actually smoked a pipe, and did other related evil things! There you have it folks: one of the world’s greatest Christian apologists is seen as an infidel because this person managed to find pipe-smoking in a Bible that nowhere ever mentions such matters.

The truth is, millions of people have been saved and discipled by the likes of Lewis, yet this guy wants to start a war over pipes! Go figure! What did Jesus say about ‘straining at gnats and swallowing camels’? It is so tragic really.

Adding man-made rules and regulations to the Word of God is not a sign of biblical purity, but a sure and certain sign of a demonic cult. Such extra-Biblical legalism is a clear indication of a cult which thinks it knows better than God and his Word.

The other case involved a person insisting with absolute certainty that the great commission of Matthew 28 is not for believers today, and that that sort of work is only the business of “called ministers of the Gospel”! Yes he actually said that. Oh foolish me. And there I thought I had an obligation to share my faith and help grow new believers.

I obviously must be out of the will of God here. I actually thought I had a Biblical obligation to evangelise, share my faith, build others up, be involved in discipleship, and work with God to help build and extend the Kingdom. But now I learn only a few professionals are allowed to do this! Obviously Luther was quite wrong about the priesthood of all believers as well!

So not only do we have plenty of believers who know very little about the Bible and their own Christian faith, but we have those who think they know their stuff, but are in fact steeped in extra-biblical and anti-biblical ideas and beliefs. No wonder the church is in such a bad way.

With all this biblical illiteracy we are thus unable to offer any clear biblical discernment. So we just soak up what the world has to offer. This my friends is not a good place to be in. The Bible everywhere speaks of the need to have godly discernment.

God blessed Solomon wonderfully because that is the very thing he asked for: Godly wisdom and biblical discernment. Jesus rebuked the crowds saying, “When you see a cloud rising in the west, immediately you say, ‘It’s going to rain,’ and it does. And when the south wind blows, you say, ‘It’s going to be hot,’ and it is. Hypocrites! You know how to interpret the appearance of the earth and the sky. How is it that you don’t know how to interpret this present time? Why don’t you judge for yourselves what is right?” (Luke 12:54-57)

They could discern the weather but not current events. Paul said we must “test everything” (1 Thessalonians 5:21-22), while John wrote that we are to “believe not every spirit, but try the spirits” (John 4:1,2). The Bible is full of such admonitions to discern, assess, judge, test, evaluate and think carefully.

We are not to be tossed about by every wind of doctrine (Ephesians 4:14), and we are not to be conformed to the world and its standards (Romans 12:2). Instead we are to have the mind of Christ (1 Cor. 2:16). Having the mind of Christ comes from knowing His Word. We must get back to basics here. For too long we have allowed biblical ignorance to rule. This must stop. As Wayne Grudem once said,

“I am convinced that there is an urgent need in the church today for much greater understanding of Christian doctrine, or systematic theology. Not only pastors and teachers need to understand theology in greater depth — the WHOLE CHURCH does as well. One day by God’s grace we may have churches full of Christians who can discuss, apply and LIVE the doctrinal teachings of the Bible as readily as they can discuss the details of their own jobs or hobbies – or the fortunes of their favorite sports team or television program.”

Or as J. Gresham Machen said in Christianity and Liberalism “But if any one fact is clear, on the basis of this evidence, it is that the Christian movement at its inception was not just a way of life in the modern sense, but a way of life founded upon a message. It was based, not upon mere feeling, not upon a mere program of work, but upon an account of facts. In other words it was based upon doctrine. There should certainly be no debate with regard to Paul himself. Paul was not indifferent to doctrine. On the contrary, doctrine was the very basis of his life.”

Only a rediscovery of God’s Word and a new love of his truth can get us out of the spiritual morass we find ourselves in today. At a time when spiritual discernment is needed more than ever, we seem to have less of it than ever.

14 Replies to “Whither Biblical Discernment?”