Twelve years ago the most horrific attack on American home soil took place. It happened because of a political ideology known as Islam. The 3,000 innocent men, women and children who died that day must never be forgotten. And we must never forget an enemy which has vowed to destroy us.

Obama has of course sought to forget about them. Indeed, he is siding with the al-Qaida rebels in Syria, as well as the anti-Western Muslim Brotherhood in Egypt. And in the meantime, we still await justice for the 9/11 victims. As Michelle Malkin reminds us:

“A dozen years after the 9/11 attacks, the trials against the jihadist plotters who incinerated pregnant women, firefighters, grandparents, newlyweds, toddlers and schoolkids on their first-ever plane rides have yet to begin. Justice not only has been delayed and denied. Justice has been demoted, disowned and deserted. Justice for the 9/11 victims and families isn’t blindfolded. She’s gagged and hogtied.”

She concludes her article: “Debra Burlingame, founder of 9/11 Families for a Safe and Strong America and sister of American Airlines Flight 77 pilot Charles Frank ‘Chic’ Burlingame III (the flight the jihadists crashed into the Pentagon) sounded the alarm and warned the Obama/Holder brigade: ‘We will fight you all the way.’

“That’s the unapologetic vigilance America was supposed to have adopted after the towers fell, the planes crashed and the ashes choked the air. Instead, America’s leaders have allowed jihadists to make a mockery of justice. Muslim Brotherhood radicals waltz freely in and out of the nation’s capital. Border security remains a joke. A functioning entry-exit program for foreign visa-holders is still nonexistent. There still is no systemic, coherent and unapologetic plan to keep Islamic radicals from spreading their hate and endangering Americans in our military, prisons and schools.

“I’m sick of 9/11 anniversary ceremonies by politicians who pay lip service to peace and justice for our country, but refuse to secure them all the way, every day. Remembrance is worthless without resolve. Resolve is useless without action. Want to honor the 9/11 dead? Take care of unfinished business here at home. Put America first.”

Yet Obama is not doing this. He is happily allowing a ‘million man Muslim march’ on Washington this day. Since our leaders are in bed with the Islamists, a ‘2 million man biker’ ride on Washington is also planned for the day. It should be an interesting confrontation.

But amidst all the still raw emotion, pain and grief, there are some images we can never forget. Some of the most unforgettable images of 9/11 are of the ‘jumpers’ – those who were forced to leap out of the burning WTC to their death far below. 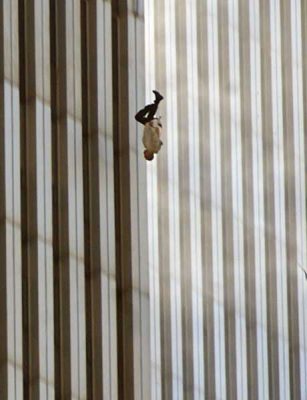 Four years ago an important article on this appeared in Esquire magazine. “The Falling Man” by Tom Junod discusses one of these jumpers. He writes: “Some people who look at the picture see stoicism, willpower, a portrait of resignation; others see something else – something discordant and therefore terrible: freedom. There is something almost rebellious in the man’s posture, as though once faced with the inevitability of death, he decided to get on with it; as though he were a missile, a spear, bent on attaining his own end.

“He is, fifteen seconds past 9:41 a.m. EST, the moment the picture is taken, in the clutches of pure physics, accelerating at a rate of thirty-two feet per second squared. He will soon be traveling at upwards of 150 miles per hour, and he is upside down. In the picture, he is frozen; in his life outside the frame, he drops and keeps dropping until he disappears.”

“For more than an hour and a half, they streamed from the building, one after another, consecutively rather than en masse, as if each individual required the sight of another individual jumping before mustering the courage to jump himself or herself. One photograph, taken at a distance, shows people jumping in perfect sequence, like parachutists, forming an arc composed of three plummeting people, evenly spaced.

“Indeed, there were reports that some tried parachuting, before the force generated by their fall ripped the drapes, the tablecloths, the desperately gathered fabric, from their hands. They were all, obviously, very much alive on their way down, and their way down lasted an approximate count of ten seconds. They were all, obviously, not just killed when they landed but destroyed, in body though not, one prays, in soul.

“One hit a fireman on the ground and killed him; the fireman’s body was anointed by Father Mychal Judge, whose own death, shortly thereafter, was embraced as an example of martyrdom after the photograph — the redemptive tableau – of firefighters carrying his body from the rubble made its way around the world.”

Let these moving words, and the haunting image which accompanies the article, be forever burned onto your hearts and minds. This is why we must never forget.

8 Replies to “Why We Must Never Forget”