Well it is getting to be that time of year again, and sadly, far too many well-meaning but confused believers want to lay a guilt trip on other believers, and trap them in a new legalism by claiming that Christmas is a demonic, pagan event which Christians should avoid like the plague.

These folks usually have little historical and biblical knowledge about such matters, but are quite happy to condemn millions of believers worldwide for actually celebrating the birth of Jesus at Christmas time. They differ little from the Judaisers that Paul had to battle 2000 years ago in putting believers who are free in Christ under new burdens and laws. 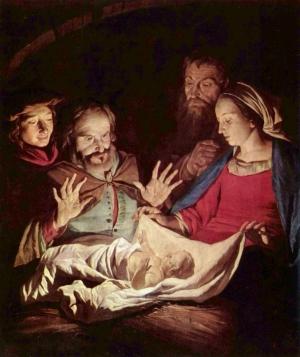 So just what is the story here? First let me state the obvious: the pure commercialisation and secularisation of Christmas is something all Christians should be concerned about. We have taken a sacred day on the church calendar and turned it into a money-making event where greed and avarice reign supreme.

I of course am not defending that here. But the claims of pagan origins need to be looked at more carefully. Very briefly, the claim is that Constantine in the fourth century used birth celebrations of the pagan gods and created Christmas, to help pagans out a bit with the new official Christian faith.

But there is much more to this of course. It is true that we cannot state with certainty what day Jesus was actually born; December 25 may or may not be it. But as David Withun puts it, “The earliest historical source that exists which places a pagan holiday on December 25 is the proclamation by Roman Emperor Aurelian of a celebration of Sol Invictus on that day in 274 CE. The earliest Christian reference to December 25 as the birth of Christ, however, dates from 202 CE.”

And as Hank Hanegraaff states: “The real question that must be addressed is, ‘What was the church’s intent in choosing December 25 for the celebration of Christmas in the first place?’ The answer may surprise you! The early church chose this date to point to the triumph that Christ’s birth represented over the pagan traditions of the Roman Empire. In other words, the church was not endorsing a pagan ceremony but establishing a rival celebration. Today the world has all but forgotten the pagan gods of Rome. But at least a billion people on planet Earth celebrate the Christ of Christmas.”

Moreover, God himself does not seem to mind taking a pagan custom and using it for his own purposes. Greg Koukl elaborates: “Circumcision was practiced by the Egyptians before it was practiced by the Jews. It was a cultural practice which had some religious significance. God captured the practice, gave it to Abraham, reinvested it with new meaning and it became a religious rite for Abraham to worship his creator.

“We think of circumcision as this really holy thing in the Old Testament associated with the covenant, which it was. But it wasn’t that way originally. By golly, it seems to me that if God can do such a thing – take a practice that had heathen content to it, save the practice, reinvest new information to it – then it certainly is okay for the church to do it.

“We’ve done that many times. We’ve done that in other cultures and it served to offer a springboard for us into cultures using cultural forms and reinvesting them with new meaning. If you read Don Richardson’s books Eternity in Their Hearts or Peace Child, this is what he talks about. They captured cultural forms that had one meaning and reinvested it with a new meaning, and this became a springboard to reach into these cultures with the Gospel of Jesus Christ.

“And we’ve done the same thing with Christmas. Now there is nothing at all wrong with that. We’re not celebrating a pagan holiday because the pagan holiday was the saturnal and we’re not worshipping the god of Saturn, or whatever the content was. We are not doing that.”

OK, so what about Santa? Hanegraaff offers a helpful summary here: “There is no doubt that Santa Claus in its present form is a fairy tale or myth. However, there really was a Santa Claus. The name ‘Santa Claus’ is an Anglicized form of the Dutch Sinter Klaas, which in turn meant ‘Saint Nicholas.’

“Nicholas was a Christian bishop in the fourth century about whom we know little for sure. He apparently attended the Council of Nicea in A.D. 325, and a very strong tradition suggests that he did show unusual kindness toward children. While the red-suited old man in a sled pulled by flying reindeer is a myth, the story of a children-loving old man who brought them gifts probably is not — and in many countries, that is all there is to ‘Santa Claus.’

“Telling children that Santa can see them at all times and that he knows if they have been bad or good, etc., is wrong. Parents should not tell their children the Santa Claus story as if it were literal truth. However, children under seven or eight years of age can play ‘let’s pretend’ and derive just as much fun from it as if they thought it was real. Indeed, at that age they are learning the difference between make-believe and reality.

“Much younger children will be fascinated by presents that are discovered Christmas morning under the tree that they are told are from ‘Santa,’ but they will not draw any conclusions about the reality of Santa Claus from those discoveries.”

And what about things like Christmas trees? Jeremiah 10:2-4 is often – and foolishly – cited as proving we cannot have such ‘diabolical’ things in our homes. But of course this passage was written 500 years before the birth of Christ, and has absolutely nothing to do with Christmas trees.

One of the most common ways of making idols to worship back then was to chop down a tree and carve out of it your favourite god. What in the world does that have to do with decorations at Christmas time? Nothing whatsoever of course. Pagan idolatry was what Jeremiah had in mind – not Christmas trees.

The same can be said about the giving of gifts. Whether or not gifts were given in honour of ancient gods is immaterial here. The early church saw this as a perfectly fitting way to demonstrate and illustrate the greatest gift of all: the giving of God’s son on our behalf. So our gift giving is to serve as a reminder of this great truth.

Certainly the Christmas period should not just be another exercise in materialism, commercialism and consumerism. Jesus is indeed the reason for the season, and we should be proud to proclaim and celebrate that fact. Let me conclude with the words of one Reformed Christian pastor. He concludes his lengthy article this way:

“So folks, lighten up, rejoice in your liberty of conscience in Christ. If you choose not to celebrate Christmas, then the Lord bless you – take advantage of having the day off and read a good book or something. But grant your brother the same liberty of conscience – and literally, for God’s sake, do not create a law where He Himself has not done so. But as for me and my house, we intend to feast and celebrate and rejoice that the Lord has come into the world with a cheerful heart and a good conscience.”

BTW, my companion piece on Easter can be found here: billmuehlenberg.com/2013/03/29/easter-of-pagan-origins/

38 Replies to “Christmas: Of Pagan Origins?”