Every person who names the name of Christ is part of the Resistance. We are resisting the world, the flesh and the devil, and we are taking a stand for Christ and the Kingdom. We seek to reclaim territory lost to the enemy, and make the lordship of Christ preeminent in all things.

I have just penned a piece on this, reminding us of our role as resistance fighters, involved in an all-out conflict. We are not here to just occupy space, but to reclaim occupied territory. See my piece here: billmuehlenberg.com/2013/12/09/we-are-the-resistance/

In that article I mentioned the French Resistance during the Second World War. Many other nations under Nazi occupation also had brave and gallant resistance fighters. One thinks right away of the role of people like Corrie ten Boom and Anne Frank in the Netherlands, who bravely did so much during this horrible period.

Here I would like to mention two individual heroic resistance fighters. And if you don’t mind, I will simply draw upon two older newspaper reports of these amazing women, the first of whom was a Dutch gal. Her story begins this way:

“For seven decades she kept her story to herself. Then, on her 90th birthday, Grietje Scott decided to reveal all. The frail pensioner, who has lived in Scotland since 1948, has finally told how she became a decorated WW2 hero who was part of an elite fighting force in the Dutch Resistance.

“Mrs Scott dodged bullets, hid crucial supplies from the Nazis and helped hide fleeing Jewish families from the clutches of the feared Gestapo. Despite being decorated by the Yad Vashem – Israel’s official memorial to the Jewish victims of the Holocaust – Mrs Scott kept her heroism a secret.

“That was until she celebrated her 90th with her family at the Homemount House care home in Largs, North Ayrshire, on January 12. Now her son Andrew, 58, has written a 90-page book about his mother’s war time experience called A Roll in the Snow….

“Shortly after Mrs Scott’s brother Willem was arrested and interrogated. His experience affected him to such an extent he retired from the Resistance and Mrs Scott took up the mantel. The set up worked well until 1944 when Abraham, the child living in the house, began to have nightmares.

“After fears the child would rouse suspicion with his midnight screaming Mrs Scott fled north to the village of Hilliegrom, near Haarlem, where she persuaded a poor single mother to take in the boy. Mrs Scott spent the next year walking miles every day buying food from an isolated farm and selling it on the Black Market to support the boy.

“The brave woman, now in her early 20s, became involved with a Resistance fighter from nearby Arnhem and together they carried out sabotage missions stealing and hiding drums of Nazi petrol, setting up hide out for Commando troops fighting behind enemy lines and she once used her medical skills to help in the rescue and aid of two Resistance fighters from the Nazi police headquarters in Hoofddorp.” 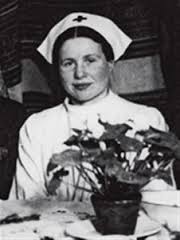 My second heroine was a famous Polish resistance fighter known as the “angel of Warsaw” – a courageous woman who saved 2,500 Jewish children from the Nazi-created ghetto. The story opens: “Irena Sendler saved twice as many Jews from death as the celebrated Oskar Schindler, who inspired Steven Spielberg’s film.

“Unlike Schindler, she was arrested and tortured by the Gestapo. Unlike Schindler, who knew the people he helped, she risked her life for strangers. Yet astonishingly, Irena lived in obscurity for decades and when she was finally acknowledged was presented as a bland icon, not nearly as interesting as the paradoxical Schindler.

“It was really only in 1999, after four teenage girls from Kansas were assigned a school history project – to find out more about this rumoured heroine of the German occupation – that her story was uncovered. The pupils tracked her down and wrote a play about her which they performed across America. Now it’s being made into a film, with Angelina Jolie mooted to star….

“After German troops marched into the city that autumn, they began relocating the Jewish population to the ghetto, closing it a year later and trapping 400,000 people in squalor within its walls. A quarter died from starvation and disease even before the deportation to concentration camps began. But, fearful of typhus crossing into Aryan Warsaw, the occupiers allowed the social services department access to the ghetto, and Irena began using her pass to smuggle in medicine and food.

“After joining one of the underground movements, she began to smuggle out children. She led a network of ten, nine of them women, one of whom died for her resistance activities. They hid the children in coffins and body bags, led them through cellars and sewers; they sedated babies and carried them out in boxes. Irena placed infants with childless couples, and older children in temporary ‘foster’ homes where they learned Catholic rites before melting away into church orphanages and schools….

“Irena was charismatic enough to persuade hesitant Jewish parents to hand over their children to the care of gentiles. Elzbieta has since heard that her Jewish family wept when they learned she was to be baptised. Later, though, they signalled their understanding by sending a white christening robe and a tiny gold cross through intermediaries. For her part, Irena was determined to reunite children and birth parents when the war ended. She made two coded lists, recording the children’s fake and real identities, and buried these in glass jars in the garden of a friend.

“One night in October 1943 – betrayed by a colleague under questioning, and by an inquisitive landlady – Irena was arrested by the Gestapo and taken to the notorious Pawiak prison. Over a period of three months, she was tortured – the soles of her feet beaten repeatedly – but revealed nothing. She escaped on the morning of her scheduled execution with the connivance of her guard, who had been bribed by the resistance. For the rest of the war, she lived as her rescued children lived – in hiding, under an assumed name.”

You can read much more about these incredible women in the articles I link to below, and elsewhere. They should inspire every one of us to break out of our slumber, refuse the trivialities of our life, and aspire to true biblical greatness and heroism. They should motivate us to do far more to help others, and extend the Kingdom of Christ.

We are, after all, all part of the Resistance, and as believers we have an enormous job to do to rescue spiritual captives of the devil, as well as work to be salt and light in a very needy, broken and enslaved world. Will you join in with the other resistance fighters?

10 Replies to “Tales From the Resistance”