It really does not take much to spark a thought for a new article. This article took a split second to conceive. Elsewhere a kind soul sent me a brief message which included these words: “God Bless you and your family Bill Muehlenberg. You are a voice for the truth and such a critical part of the resistance.” I thought right away, “Yes, exactly – we ARE the Resistance!”

What a great concept. As C. S. Lewis once said, “When the whole world is running towards a cliff, he who is running in the opposite direction appears to have lost his mind.” That is exactly the situation we find ourselves in today. The entire world is plunging over the edge – and far too much of the church as well – and we are the Resistance shouting “Stop! Wrong way! Turn back!” 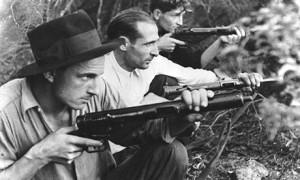 There are many historical examples of the Resistance in action. Immediately the French Resistance springs to mind of course. It is not normally my practice to quote from Wikipedia, but in this case I will make an exception and cite the opening paragraphs of its article on this:

“The French Resistance (French: la Résistance ‘the Resistance’) is the name used to denote the collection of French resistance movements that fought against the Nazi German occupation of France and against the collaborationist Vichy régime during World War II. Résistance cells were small groups of armed men and women (called the Maquis in rural areas), who, in addition to their guerrilla warfare activities, were also publishers of underground newspapers, providers of first-hand intelligence information, and maintainers of escape networks that helped Allied soldiers and airmen trapped behind enemy lines. The men and women of the Résistance came from all economic levels and political leanings of French society, including émigrés; conservative Roman Catholics, including priests; and citizens from the ranks of liberals, anarchists, and communists.

“The French Resistance played a significant role in facilitating the Allies’ rapid advance through France following the invasion of Normandy on 6 June 1944, and the lesser-known invasion of Provence on 15 August, by providing military intelligence on the German defenses known as the Atlantic Wall and on Wehrmacht deployments and orders of battle. The Résistance also planned, coordinated, and executed acts of sabotage on the electrical power grid, transportation facilities, and telecommunications networks. It was also politically and morally important to France, both during the German occupation and for decades afterward, because it provided the country with an inspiring example of the patriotic fulfillment of a national imperative, countering an existential threat to French nationhood. The actions of the Résistance stood in marked contrast to the collaboration of the regime based at Vichy.

“After the landings in Normandy and Provence, the paramilitary components of the Résistance were organized more formally, into a hierarchy of operational units known, collectively, as the French Forces of the Interior (FFI). Estimated to have a strength of 100,000 in June 1944, the FFI grew rapidly, doubling by the following month, and reaching approximately 400,000 by October of that year. Although the amalgamation of the FFI was, in some cases, fraught with political difficulties, it was ultimately successful, and it allowed France to rebuild a reasonably large army (1.2 million men) by VE Day in May 1945.”

I love using illustrations from the Second World War because it fits in so nicely with biblical truth. We too are living in occupied territory. The enemy, Satan, has stormed into this world and conquered huge swathes of it, taking illegal possession of it. We are the Resistance, fighting back, seeking to retake occupied territory.

We too are a small minority, but we have guts, persistence, determination and zeal. We will prevail. Sure, there will be plenty of casualties along the way, and the toll will be very heavy indeed. But all wars are costly, and all conflicts involve self-sacrifice, bravery, and a willingness to die for the cause.

It is above all a spiritual battle, but as I have pointed out hundreds of times here, this battle takes place on all sorts of levels: political, social, cultural, moral, intellectual, philosophical, ideological, and so on. And at the moment the other side is winning big time in all these arenas.

According to plan in fact, the radicals and social activists have taken over all the key institutions of power and influence in the West and are now calling the shots. They basically control our schools, media, and courts. They are ensconced in all the key areas: politics, education, pop culture, even the churches.

So we are the Resistance. We have a huge job to do. We are here as Christ’s ambassadors to take back planet earth for Christ and the Kingdom. It is his world after all, and we are called to reclaim lost territory. With Christ victory is assured, but we are his foot soldiers, and our task is great and the need of the hour is urgent.

Christians need to get out of their very narrow little world and see beyond their pet concerns, and start grasping the big picture here. We are in a war. And in a war, no one had the luxury of sitting on a fence, and no one can waste time on trivial pursuits.

This is a real war with real casualties. Christians need to snap out of their slumber and get their battle gear on. They need to get onto the front lines pronto and start doing their bit, with the help of God and the power of the Holy Ghost. We dare not shrink back from this, or just sit around playing our little games.

A global world war is on. The enemy is roaring and taking loads of prisoners and killing many. Yet much of the church is snoozing through this entire war. Most believers have no idea what is going on all around them. They have to understand the times, and get some strategic awareness here. As C. S. Lewis put it in Mere Christianity – written during war time (WWII):

“This universe is at war. It is a civil war, a rebellion, and … we are living in a part of the universe occupied by the rebel. Enemy-occupied territory – that is what this world is. Christianity is the story of how the rightful king has landed, you might say landed in disguise, and is calling us all to take part in a great campaign of sabotage. When you go to church you are really listening-in to the secret wireless from our friends: that is why the enemy is so anxious to prevent us from going.”

Yes, we are the Resistance. Do you know that? Are you proud of that fact? Are you fighting the good fight? Are you reclaiming lost territory from the enemy for the glory of God and the good of those who will come after us? If not, why not?

8 Replies to “We Are the Resistance”