I have said it before and I will say it again: I am a Christian, and my Christian faith ultimately trumps all political and ideological agendas. Having said that, I have also argued that Christianity has a fair amount in common with conservative political philosophy. I have gone even further and said that to be a true biblical Christian means it will be difficult to be a gung-ho libertarian. 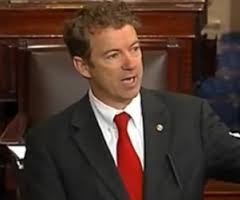 We had a good example of the wide gulf between the two positions just recently in the US, with two leading politicians of the right – both Republican Senators – locking horns on key social issues. Libertarian Rand Paul has just recently said the Republican Party may need to ease up on things like homosexual marriage.

This demonstrates in part the wide gap between the two camps. While both do favour the free market and limited government, the libertarians want to basically run roughshod over vitally important moral and social concerns, arguing that the state should not be involved in them in any way.

The truth is, libertarians take individual liberty as the greatest possible good, and allow it to trump every other concern. That is something biblical Christians just cannot do. We believe that all rights must be counterbalanced by responsibilities; that we are social and moral beings who cannot live in isolation; and that God created the state to help restrain evil in a fallen world.

That is patently false. Conservatives are also very much concerned about the role and size of government, but they also know that the state has a very real role to play in these areas. Sure, we fight against moral and social evil by the use of moral suasion, by changing the hearts of people, by appealing to the common good, and so on. But that is not all that is needed here.

The foolish libertarian idea that almost all social evils can be addressed purely by non-governmental means is simply ridiculous. Try telling that to Wilberforce. Sure, he used intellectual and moral persuasion. Sure he sought to change community attitudes. Sure, he worked on various levels to change public opinion.

Sure, he used the churches, prayer and many other means to push for the rights of slaves, and to bring to a halt the evil slave trade system. But some of his critics could have foolishly told him that this is not a matter for the state: “Don’t expand the size of government by dragging the state into this.”

He knew that if the evil of slavery was to be ended, then of course the state had to be used, and of course legislation had to be harnessed to achieve his desired ends. And it is the same today with some of these big social issues. Churches, individuals and community groups alone are simply not going to stop things like abortion or the illicit drug scourge.

Sure, they all have a great role to play, especially at the healing level of things. But prevention is always better than cure, and preventing some of these great social ills by the use of legislation is quite acceptable, and even necessary – no matter how much the libertarians rattle on about expansive government and the like.

But let me get back to Paul and Cruz. As can be imagined, I am fully with Cruz here, and quite against what Paul had to say. That should come as no surprise. Indeed, I have elsewhere taken aim at the wild libertarianism of his dad, Ron Paul.

Fortunately Rand Paul appears to be not quite as loony as his father, but he is still a gung-ho libertarian. My concerns about Ron Paul can be found here for example: billmuehlenberg.com/2011/12/27/conservatism-libertarianism-and-christianity/

And I am not the only one to think Rand Paul’s advice is actually political suicide, and unnecessarily putting up the white flag of surrender. Michael L. Brown has also come out today criticising Paul for his ideas. Brown says the very things I thought when I heard Paul’s remarks: “Is he serious? Does he actually think this is a winning strategy? And can he truly believe that this is a way for Republicans to advance their cause?”

Let me quote Brown at length:

What a self-defeating, misguided strategy, for quite a few reasons.
First, the very concept of expanding a party whose platform includes a strong, conservative stand on social issues by weakening that stand is contradictory and wrong-headed. It would be like Planned Parenthood deciding to agree to disagree on abortion, actively recruiting pro-lifers into their ranks (or the reverse, with pro-lifers expanding their base by agreeing to disagree on abortion and welcoming pro-abortionists into their ranks). Who ever heard of such nonsense?
Second, we’ve already seen in recent elections that by catering to the left-of-center Republicans, the party’s most important voting base gets turned off and fails to vote in force. And make no mistake about it: What Paul is referring to does cater to the left-of-center voters (more on this shortly).
Third, has Paul learned nothing from the success of the Democrats in 2012? Their platform, highlighted during the DNC, put forth a radical social agenda (from the most extreme pro-abortion stances to the wholesale embrace of gay activist goals, most particularly redefining marriage), and the Democrats did so unashamedly. Yet Paul thinks that by doing the opposite with his own party’s values, the Republicans can succeed.
Fourth, by compromising core values in order to get elected, you ensure that your party will be ineffective in bringing about change once elected, regardless of what promises are made. In fact, leaders who compromise in order to get elected have already revealed themselves to be lacking in conviction (which is a reason they should not be voted for in the first place).
Fifth, by minimizing the massive implications of redefining marriage – this is not the kind of issue you “agree to disagree” on – Sen. Paul indicates a fundamental lack of understanding of the inevitable results that will follow should marriage be redefined on a national level.

He goes on to say how frightening it was to read Paul talk about people being “festooned by” issues like traditional marriage. I too could not believe my eyes when I read that. Brown concludes: “The fact that he is presently at or near the top of the Republican heap is downright scary.”

This little exchange between Paul and Cruz not only highlights the very real differences between libertarians and conservatives, but also shows how radical the implications of each political philosophy are when it comes to practical political concerns.

Folks like Rand Paul will, in my eyes – and Brown’s, and others – actually destroy the Republican Party if his advice becomes the accepted wisdom. Let us hope and pray that his silly ideas are rejected, and the common sense and biblical realism of people like Cruz is embraced instead.

9 Replies to “Conservatism Versus Libertarianism: A Case Study”