The biggest promoter of New Age moonbattery in the world today is of course Oprah Winfrey. Many years ago she abandoned any claim to being a Christian, and she now shamelessly promotes every bit of loony spirituality around. New Age guru Eckhart Tolle is just one of the many new spirituality folks she fervently champions.

I have written about all this elsewhere: billmuehlenberg.com/2009/06/18/the-gospel-according-to-oprah/

But it is not just outright paganism that she peddles to millions of gullible and conned groupies, but whacko Christian leaders as well. For example, she just loves megachurch pastor Joel Osteen. And no wonder, since what he preaches from his Texas pulpit is indistinguishable from what Tolle, Oprah and others preach.

Indeed, their message is basically identical, as I document here: billmuehlenberg.com/2009/05/18/will-the-real-gospel-please-stand-up/

It is all the New Age and cultic ideology of self-improvement, mind over matter, self-help, and creative visualisation. Just think happy thoughts and say happy things and you will live a happy life. You will be happy, successful, rich, problem-free and living the good life.

All of which is the exact opposite of what Jesus taught of course. He said we will be hated by the world, we will be persecuted, we will have troubles, and we will face constant opposition and hardship. And he said that the real disciple of his is one who denies himself, takes up his cross daily, and dies to self. 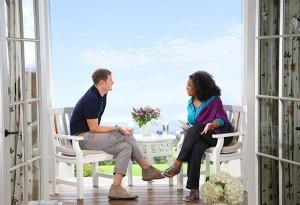 The gospel of Oprah, Tolle, Osteen and others is all about ME. It is the Gospel of Self. Self is deified, worshipped, coddled, pampered, pandered to, and made the centre of the universe. It is an anti-God gospel actually, since it makes self the centre of all things, and the highest good in the universe.

Thus Osteen writes best-sellers like Your Best Life Now and Become a Better You. And now Oprah is doing a national “The Life You Want” tour. Hey, that sounds just like something Osteen would run with. It has the identical focus: It is all about ME. It is L’oreal Christianity in fact: billmuehlenberg.com/2010/04/30/l%E2%80%99oreal-christianity/

So nothing surprising here. But what continues to be a worry is how many compromised Christians she is bringing on board here. And as usual, she will dupe and deceive millions by adding a few big name Christian leaders who happen to be apostates.

But let me mention a bit more about this major tour of deception. As one write-up states:

Oprah Winfrey will be touring the U.S. this fall to help “lead people to an empathy space… a gratitude space” in an effort to find their calling and fulfill their greatest potential. Helping Winfrey in the tour hitting cities on both coasts will be influential and controversial Christian author Rob Bell, and other “handpicked thought leaders and pop culture icons.”
“All of my life I have wanted to lead people to an empathy space. To a gratitude space,” said Winfrey in a press statement. “I want us all to fulfill our greatest potential. To find our calling, and summon the courage to live it.”
Each stop on the national tour will run two days, with the first night featuring Winfrey “bringing her personal story and insights to life in a one of a kind intimate evening” and the following will have the media mogul and Bell, or another one of her handpicked guests, “lead a day-long gathering of thousands.”

There are at least two ways in which we can assess all this. One is simply to examine the mammon motivation here. The truth is, while Oprah is already filthy rich, she is going to get a whole lot richer from this tour. Just think of all the naive, undiscerning and clueless dupes out there who will be dishing out big bucks to hear these false prophets and fraudulent gurus. As Business Week reports:

Winfrey is embarking on an eight-city arena tour called “Oprah’s The Life You Want Weekend,” which is being billed as a real-life reinterpretation of her original Chicago talk show. Each tour stop will last two days, during which Oprah will share her personal success story and interview self-help gurus such as Rob Bell and Eat, Pray, Love author Elizabeth Gilbert. Events will take place at huge, 18,000-seat arenas, and ticket prices range from $99 to $999, which means Oprah can expect to make an estimated $1.8 million to $18 million per city.

Just imagine all the damage that will be done, not just in these eight cities, but elsewhere. This will all likely be televised and promoted world-wide. Thus there is the potential for tens of millions of people to be conned into her diabolical worldview.

This mass marketing of deception is coming straight out of the pits of hell. Satan is rubbing his hands with glee, knowing he will capture millions of souls for a lost eternity. But the worst part here of course is the blatant complicity of “Christians” like Bell.

By going along with all this, he is demonstrating even more clearly what a wolf in sheep’s clothing he really is. Who knows how much money he will make off this tour. But the real tragedy is that a host of biblically illiterate Christians will rush to these meetings, because they think it will be a “Christian” affair.

Oprah will of course meet her maker one day and have to give an account. We need to keep praying for her that she repents and leaves this diabolical poison behind. But even worse yet will be the judgment of Christian leaders who are doing the devil’s work.

Bell too needs our prayers. He too needs to repent, and fast. But it won’t be easy of course. When folks like Osteen and Bell are rolling in the dough, and have millions of blind worshipers hanging on to their every word, it is very hard indeed to see the light.

Jesus warned us often about false Christs and false shepherds coming along to deceive people. And Paul spoke of Satan himself appearing as an angel of light, seeking to deceive the very elect. I can’t think of a better example of what they were talking about than this tour from hell – the very one Bell does not believe in.

6 Replies to “Bell and Oprah Lovefest: No Surprises Here”