I tend to keep pretty busy with my own website (with nearly 2,900 articles and over 44,000 comments, it is a 24/7 operation), so I don’t check out too many other websites or bloggers, except for a few indispensible ones (townhall, barbwire, etc).

But it is nice to know I am not alone in my endeavours and that many others are writing and speaking about the sorts of issues that I am. Sometimes I see a new article and think, “Yep, great stuff – I have been saying this for years”. So it is good that others are on the same wavelength and fighting the same battles.

One new article by a relatively new blogger is worth speaking to in this regard; but first, a bit of background. For ages now I have been warning the Christian world to get serious about its faith, and stop the feminised, spineless wimpianity that we so often find in the West. 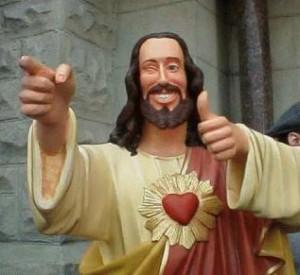 It is time to get a bit of backbone, and start standing strongly and firmly for the faith. Forget about trying to please people, and to be accepted by others, and to be liked by the world. And for heaven’s sake, stop trying just to be so nice all the time.

Christianity is not about being nice. It is about boldly and fearlessly proclaiming truth in love. This is often a tough love, telling people what they need to hear instead of what they want to hear. If we really love someone, we will not allow them to wallow in their sin and deception, but will seek to deliver them from both.

The idea of Jesus as a meek and mild tree-hugging hippy who would not harm a fly, but simply flashed the peace sign all day is of course nothing like the real Jesus – you know, the one who comes riding on a war steed with his robes dripping in blood, as we read about in Revelation 19:11-16 for example:

I saw heaven standing open and there before me was a white horse, whose rider is called Faithful and True. With justice he judges and wages war. His eyes are like blazing fire, and on his head are many crowns. He has a name written on him that no one knows but he himself. He is dressed in a robe dipped in blood, and his name is the Word of God. The armies of heaven were following him, riding on white horses and dressed in fine linen, white and clean. Coming out of his mouth is a sharp sword with which to strike down the nations. “He will rule them with an iron scepter.” He treads the winepress of the fury of the wrath of God Almighty. On his robe and on his thigh he has this name written: KING OF KINGS AND LORD OF LORDS.

That does not sound like some spineless evangellyfish to me. Yet we have allowed ourselves to be conned into thinking that Jesus is a gutless wimp who accepts everything and everyone. But even in the gospel accounts we don’t get that distorted picture of Jesus.

Remember the time he deliberately formed a whip and used it with great élan in the temple? Or the time he chewed out the Pharisees, calling them “whitewashed tombs” and so on? And it is not just Jesus of course. Remember Elijah taking on the Baalists? Or Jeremiah chewing out the wayward Israelites? Or Paul publicly rebuking Peter, or calling a curse on the Judaisers?

No nice guys there. These were men who did not give a hoot about public opinion or men-pleasing. They were men with fearless conviction, steely resolve, and Holy Ghost boldness, who would never be confused with all the woosie invertebrates found in our pews and pulpits today.

So away with all this niceness baloney; let’s be Christlike instead. As I say, I am finding others saying much the same. I just googled this theme, and found some great articles. The headlines alone are winners, headlines such as:

Each piece contains similar thoughts to what I have expressed here and elsewhere. But as I mentioned, there is a new blog site out there which is also tackling a lot of these key issues. I refer to the Matt Walsh Blog. His latest piece is entitled, “Jesus didn’t care about being nice or tolerant, and neither should you”.

He also is rightly concerned about the cult of niceness and how this diverges from what our Christian faith is supposed to be about. Let me offer a few quotes from his piece:

The propagators of the Nice Doctrine can be seen and heard from anytime any Christian takes any bold stance on any cultural issue, or uses harsh language of any kind, or condemns any sinful act, or fights against evil with any force or conviction at all. As soon as he or she stands and says ‘This is wrong, and I will not compromise,’ the heretics swoop in with their trusty mantras.
They insist that Jesus was a nice man, and that He never would have done anything to upset people. They say that He came down from Heaven to preach tolerance and acceptance, and He wouldn’t have used words that might lead to hurt feelings. They confidently sermonize about a meek and mild Messiah who was born into this Earthly realm on a mission to spark a constructive dialogue.
The believers in Nice Jesus are usually ignorant of Scripture, but they do know that He was ‘friends with prostitutes,’ and once said something about how, like, we shouldn’t get too ticked off about stuff, or whatever. In their minds, he’s essentially a supernatural Cheech Marin.

He also speaks to the temple incident:

Can you imagine how some moderate, pious, ‘nice’ Christians of today would react to that spectacle in the Temple? Can you envision the proponents of the Nice Doctrine, with their wagging fingers and their passive aggressive sighs? I’m sure they’d send Jesus a patronizing email, perhaps leave a disapproving comment under the news article about the incident, reminding Jesus that Jesus would never do what Jesus just did.
Personally, I’ve studied the New Testament and found not a single instance of Christ calling for a ‘dialogue’ with evil or seeking the middle ground on an issue. I see an absolutist, unafraid of confrontation. I see a man who did not waver or give credence to the other side. I see someone who never once avoided a dispute by saying that He’ll just ‘agree to disagree.’

He rounds things off this way:

Tolerance is easy. Any coward can learn to tolerate something. Tolerance is inaction; intolerance is action. We are called to refuse to tolerate evil. We are called to get angry at it and actively work to destroy it.
Who’d have guessed it — anger is far more godly than tolerance ever could be.
Obviously I’m not suggesting that anger is automatically, or even usually, justified. Christ exhibited righteous anger; righteous anger is the sort of anger that naturally fills our soul when we confront the depths of depravity and sin. It is wrong to seethe with rage because someone cut us off in traffic or gossips about us behind our back, but it is also wrong to feel no anger when babies are murdered and the institution of the family is undermined and attacked.
Anger is good when it is directed at things that offend not us, but God. Just as Christ’s intolerance, like the intolerance we’re commanded to have, stems from a desire to save souls and defend Truth.

So let’s forget about the gospel of niceness and let’s get back to the real gospel – a gospel that speaks about sin, and hell and the wrath of God. A gospel that pleads with people, warns people, and rebukes people, when necessary. Sure, this is to be done in love, and we are to also encourage, uplift and bless people as well when appropriate.

But no more of this vacuous Mr Nice Guy please. That helps no one, and simply sends more people to a lost eternity.