I happen to be a Protestant evangelical. While most Christians at least should know what that means, surprisingly, many do not. Indeed, I have even lectured to evangelicals in various classes, only to have some of them ask me what an evangelical is!

The answer one gets to this question of course partly depends on who is doing the asking. To the secular left and much of the mainstream media, evangelicals are fightin’ fundie theonomists who want to take over the world and put to death all renegades.

Um, no, not quite. So just what comprises an evangelical? A thesis could be written on this topic alone – and I am sure many have been. Even evangelicals themselves admit that this can be a bit tricky to fully pin down. Indeed, Robert Johnston’s comment that “agreed upon definitions of evangelicalism are difficult to find” may be an understatement. 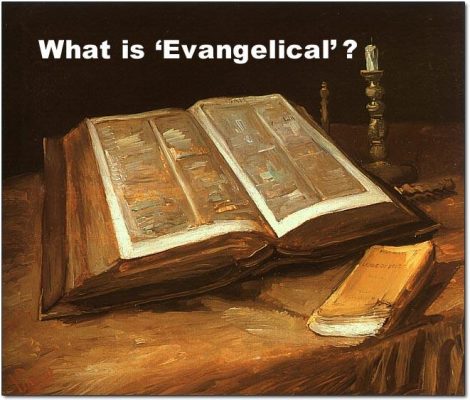 Or as Alister McGrath has put it: “It is notoriously difficult to give a precise definition of evangelicalism”. And then there are those who think it is a perilous project to even attempt to identify the boundary markers of evangelicalism. Stanley Grenz for example spoke about the dangers of “setting theological boundaries for the evangelical movement.”

However, this issue is important and needs to be explored more closely, even if a definite answer might elude us. So let’s see what we can come up with here. One evangelical, D. A. Carson, spends a chapter on this issue in his 600-page The Gagging of God. In the chapter, “The changing face of Western evangelicalism” Carson notes what a fluid and amorphous creature evangelicalism is:

“Giving a definition to evangelicalism is not only difficult, but is growing even more difficult as a wider and wider group of people apply the label to themselves. It may be, as some have suggested, that the term will eventually so lack definition as to be theologically useless.”

After canvassing a wide range of options, he offers this proposal: “I hold that ‘evangelical’ and ‘evangelicalism’ are most helpful when they are held to their etymology in the evangel, ‘the gospel [God] promised beforehand through his prophets in the Holy Scriptures regarding his Son’ (Rom. 1:2-3), on the assumption that such an ‘evangel’ is held with firmness and sincerity of heart. In this light, evangelicalism as a movement must be seen to be determined by its center, not by its outermost boundary – and even that center must, in the light of its own confession, constantly be held up to the examination of Scripture.”

After noting the complexities involved in defining the term, McGrath offers this working definition of evangelicalism: “[M]ost evangelicals and well-informed observers of the movement would suggest that evangelicalism is essentially colligatory, in that it finds its identity in relation to a series of central interacting themes and concerns…” These are, a focus on the person of Christ, the “identification of Scripture as the ultimate authority,” an emphasis on conversion or the “new birth,” and a concern for evangelism.

Other lists can be mentioned. George Marsden offers these five points: the Reformation doctrine of the final authority of Scripture; the historical character of God’s redemptive activity as recorded in Scripture; salvation by faith in Christ alone; the importance of evangelism; and the importance of a spiritually transformed life.

Richard Quebedeaux lists three “major theological principles”: the reliability and authority of Scripture, the need for a saving faith in Jesus Christ, and the urgency of seeking the conversion of the unsaved. Evangelical stalwart Carl F. H. Henry says this:

“Evangelical Christians are thus marked by their devotion to the sure Word of the Bible; they are committed to the inspired Scriptures as the divine rule of faith and practice. They affirm the fundamental doctrines of the Gospel, including the incarnation and virgin birth of Christ, His sinless life, the substitutionary atonement, and bodily resurrection as the ground of God’s forgiveness of sinners, justification by faith alone, and the spiritual regeneration of all who trust in the redemptive work of Jesus Christ”.

Another evangelical, Craig Blomberg, puts it this way: “We define Evangelicals as theologically conservative Protestants who make the truthfulness, authority and relevance of the Old and New Testaments central to their worldview, who have come to experience salvation from sin through a personal relationship with Jesus Christ and the forgiveness he offers on the basis of his death on the cross, and who believe in the importance of actively sharing that faith with others.”

English historian D.W. Bebbington offers this four-fold definition: a belief in conversionism; the importance of activism; the place of biblicism; and the centrality of the cross. And this is how the National Association of Evangelicals puts it in their Statement of Faith:

Many of these thinkers have been looking afresh at questions about the nature of God, for example. Indeed, questions associated with God’s immutability, impassibility and the extent of his foreknowledge have become hot topics of debate within evangelical circles lately.

Then too there is the whole question of postmodernism and the evangelical interaction with it (or reaction to it). That debate is growing, as is the literature about it. That particular discussion will have to be set aside here however.

In spite of the flux, the fluidity and the ever changing nature of this beast called evangelicalism, there still remain some common assumptions and/or parameters. For example, to a large degree, there is a common feature found in all the above definitions and listings, namely the centrality of Christ and Scripture.

Thus, perhaps to simplify issues, for my purposes, an evangelical can be defined as someone who, among other things, holds supreme allegiance to Jesus Christ as Lord and Saviour, and holds to a high view of Scripture. Of course such a definition may simply have raised more questions than it has answered.

But if I were asked to define myself, and/or evangelicalism, something like what I have offered here would have to suffice.

10 Replies to “What is Evangelicalism?”