OK, here is a little Christian thought experiment. It did not occur to me that Christians might have differing thoughts on this, so I throw it out there to see what you might think. When I first mentioned it elsewhere it seemed pretty straightforward to me.

Thus this reflection did not begin as an article, nor did I originally intend to do a whole piece on this. I had simply posted a brief comment on another site, and a lot of debate erupted, so it seemed sensible to turn it into a full-blown piece. Indeed, I do so because I was actually a bit surprised by some of the reactions by some Christians. 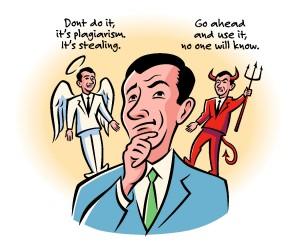 The post had to do with Christians plagiarising the work of others. Regrettably, I have noticed this often. I suggested that this was actually a form of Christian theft. I explained that because I am not the world’s fastest typist, when I am typing in a lengthy quote from someone, I will often do a quick google of the passage first.

For example, I might be quoting a few paragraphs from a commentary or reference work, and instead of retyping the whole thing, I have a look to see if it is already online somewhere. That way I can just copy and paste it, and save myself a bit of time.

Mind you, it may take as long to do the google search as it does to type it all in, but I would rather do the former than the latter! Anyway, I often have found to my horror that when the search results are brought up, and I click on some of those hits, I find that the quote I am looking for has been taken holus bolus by another Christian, but without one word of acknowledgment of the source.

And it seems we have a lot of this sort of plagiarism and intellectual dishonesty going on in our pulpits. Yet when I mentioned this, I had all sorts of Christians offering different thoughts on this, with some folks thinking it was not such a big deal: “We should not pick on pastors.” “Well, we all borrow ideas.” “Yes, but if people get saved or God is glorified, it is OK.” And so on.

But they seem to be missing the point here. This has nothing to do with picking on pastors of course. And sure, we all get ideas from all sorts of people and various sources. But when anyone – whether a pastor or not – deliberately lifts someone else’s work and passes it off as his own, that is plagiarism and that is dishonest. No Christian should ever engage in such unethical and unChristlike behaviour.

And of course theft and intellectual dishonesty never brings glory to God. The idea that we can somehow sin (and I believe that such plagiarism is sin) and reach the lost or help others is risky in the extreme. “What should we say then? Should we continue in sin so that grace may multiply?” as Paul asks in Romans 6:1.

Also, I am not talking about myself here: people pinch my stuff all the time and don’t give me any credit for it. I don’t mind all that much when they do. But what I am talking about is when pastors for example have written sermons and they simply steal whole slabs of text from people such as John Stott, or James Montgomery Boice, or Martyn Lloyd-Jones, and pass it off as their own, giving no sources at all – that is dishonest and not very Christlike.

I find this time and time again when I do a search for some Christian quote. It is not just a phrase or short sentence, but entire paragraphs and more that are lifted without any credit. That is simply wrong. Sure, there are many clichés, phrases and common terms and concepts that we all use and share in common.

We may talk about ‘the old rugged cross’ or ‘what a friend we have in Jesus’ or ‘amazing grace’ and so on. These all come from Christian hymns and are of course quite popular and well known. We do not need to give chapter and verse here, or a footnote or endnote.

I am reminded of the old quip that John Warwick Montgomery once said: lifting one quote without credit is called plagiarism; pinching many quotes is called writing a theological paper – or words to that effect. So theological students can be just as guilty here as secular ones.

And schools will often inform students about when and where proper quotation is needed. Taking an idea heard elsewhere, and reframing it into one’s own words is one thing. Deliberately pinching another person’s work and pretending you wrote it is quite another. And even in academia a source is not always needed. Very well-known phrases like Marx’s ‘religion is the opiate of the masses’ need not be fully referenced every time.

The sermon of course is not the same as a proper research paper or thesis at university. But it is not just in the academy where plagiarism is a problem, as I am trying to highlight here. Christian leaders of all people are to be without blemish and fault – men and women of integrity. This includes their intellectual life.

A sermon usually has no footnotes and the like. But if you quote others, it is usually good form to acknowledge even fleetingly where it came from. This is even more important if the sermon is written out, and later printed and/or put online. Then a bit more care is needed. So let us be cautious here.

None of us in the ministry would dare think about cheating on our spouses, or stealing from the church finances. Why should we not be equally zealous about cheating on intellectual property, and stealing from another Christian’s work? As Paul says, whatever we do, let’s do it for the glory of God (1 Corinthians 10:31; Colossians 3:17).

And I really don’t think that rather blatant cases of plagiarism can glorify God.

22 Replies to “On Christian Plagiarism”