This is certainly so in Europe and England. Of course God always saves for himself a remnant. He always has a godly minority who are standing strong. So that is true today, be it in Amsterdam, or London, or Geneva. There are many such pinpoints of light shining through the darkness. 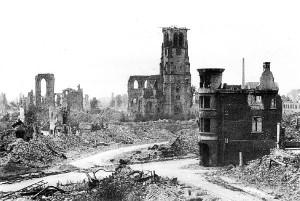 But what a wasted heritage! Just think of all that God has done there, and how much of it has now been lost. We have allowed all the great things done by the saints of old to slip through our fingers. Now only a skeleton remains. Now only a burnt-out shell exists.

Simply think of the bombed-out cities of the last great war: that is a graphic image of the spiritual condition of so much of the UK and Europe today. Much of the place lies in ruins, and so few believers even seem to care about this. There is no weeping. There is no mourning. There is no brokenness and repentance.

Instead, so many Christians just party on, seeking entertainment and self-gratification, and act as if things are just the same as always. They seem to have no clue that their heritage has been lost, squandered and wasted. But the true follower of Christ cannot be so indifferent and apathetic.

The West today is in its own Babylonian captivity. What is the mindset of those of us living in such a state? Around a week ago I shared with a group of committed and on-fire Christians in the south of England, and I raised these very issues. I said our first response must be to properly recognise and discern our true condition. We must be aware of the problem.

Lamentations 1:1-3 speaks to the seriousness of the problem the Israelites found themselves in while in captivity in Babylon: “How deserted lies the city, once so full of people! How like a widow is she, who once was great among the nations! She who was queen among the provinces has now become a slave. Bitterly she weeps at night, tears are upon her cheeks. Among all her lovers there is none to comfort her. All her friends have betrayed her; they have become her enemies. After affliction and harsh labor, Judah has gone into exile. She dwells among the nations; she finds no resting place. All who pursue her have overtaken her in the midst of her distress.”

And we desperately need God’s heart on all this. Just as it broke God’s heart to see his own people squander their spiritual heritage and to lose it all, ending up in the hands of their enemies, so it should grieve God’s people. Lamentations 1:12 so powerfully conveys this idea: “Is it nothing to you, all you who pass by?”

Don’t you care? Doesn’t it bother you? Are you not in the least bit troubled and disturbed by what has happened? As the prophet Amos put it (Amos 6:1, 6): “Woe to you who are complacent in Zion, and to you who feel secure on Mount Samaria. . . . You do not grieve over the ruin of Joseph (Israel).”

The true saint will most certainly grieve over the destruction of the work of God, be it what he had done in and through ancient Israel, or the church today. If you truly love God and his work, the spiritual collapse and malaise we find all around us will us make us sick in the stomach (as Amos 6:6 basically says in the Hebrew).

The prophet Ezekiel also spoke to the horrible situation Israel found itself in: “The Spirit then lifted me up and took me away, and I went in bitterness and in the anger of my spirit, with the strong hand of the LORD upon me. I came to the exiles who lived at Tel Abib near the Kebar River. And there, where they were living, I sat among them for seven days, overwhelmed” (Ezekiel 3:14-15).

His only proper reaction was to be consumed by bitterness and anger of spirit. Does that characterise your response as you witness the fall of the church and the triumph of godlessness, immorality and secularism all around the Western world?

Indeed, he sat there, utterly overwhelmed and blown away for seven entire days. Yet most of us can’t even find seven entire minutes to pray about our spiritual collapse, and seek for God’s grace and mercy, in the hopes that he might restore our fortunes and reverse our wretched condition.

One final godly reaction to the Babylonian Captivity – which should also be found in our response – is recorded in Psalm 137:1-4. This is such an amazing yet heartbreaking reply: “By the rivers of Babylon we sat and wept when we remembered Zion. There on the poplars we hung our harps, for there our captors asked us for songs, our tormentors demanded songs of joy; they said, ‘Sing us one of the songs of Zion!’ How can we sing the songs of the LORD while in a foreign land?”

The captors demanded a bit of merriment and glee. But how could the true child of God be so frivolous and carefree in such dark and desperate times? How could they carry on as if it were just business as usual? How could they pretend everything was just peachy?

Yet today, with so much of the Western church in a state of disarray, dysfunction, decay and decadence, so many believers don’t seem to know, or don’t seem to care. They just carry on as if nothing has happened. They seem clueless as to how so much of our spiritual inheritance has been squandered and lost.

There is of course only one proper response to all of this apathy and carelessness. May God favour his church with a mighty wave of repentance and contrition. May he break us in his great love, so that we may once again be all that he wants us to be.

It is only the sheer mercy and kindness of God if he does send such a wind of repentance among us. We so very much need it. Revival is the need of the hour, and as is often the case, great revival is intimately connected with great repentance.

May God have mercy on his wayward people in the West. We have been given so much, but used so little of it. We have squandered and wasted the great heritage bestowed upon us. We must return to our first love, and seek his face afresh.

A few words from some recent great saints are the best way to finish here:

“I read of the revivals of the past, great sweeping revivals where thousands of men were swept into the Kingdom of God. I read about Charles G. Finney winning his thousands and his hundreds of thousands of souls to Christ. Then I picked up a book and read the messages of Charles G. Finney and the message of Jonathan Edwards on ‘Sinners in the Hands of an Angry God,’ and I said, ‘No wonder men trembled; no wonder they fell in the altars and cried out in repentance and sobbed their way to the throne of grace!'” -Leonard Ravenhill

“When revival sweeps over a people, the first evidence is a profound awareness of sin and sorrow for it. This was true of the great Welsh revivals of the last century and of the revivals under the Wesleys the century before that. It was true of the Reformation and of the first revival in recorded history, the revival in Nineveh in response to the preaching of the prophet Jonah.” -James Montgomery Boice