By now you all should be aware of the horrible situation unfolding in Iraq, with Muslim militants massacring other Muslims and Christians as they capture the major towns in the north, intent on setting up a sharia police state, and are now heading to Baghdad.

Weak as water Obama will likely do nothing about this, and in fact is a major reason why all this is happening. His cut and run policies here and in Afghanistan mean we are likely witnessing a major bloodbath unfolding in that region, with the only Middle Eastern democracy, Israel, once again finding itself with even more ominous nearby threats. 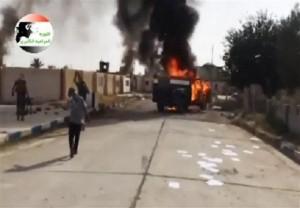 I don’t really want to deal with all the geo-politics of this here, but more the situation regarding Christians there. But just a bit of background first. Richard Fernandez offers some material here worth mentioning:

The Islamic State of Iraq and the Levant, an al-Qaeda affiliated front of Muslims, have followed up their lightning seizure of Mosul by taking Tikrit, the former stronghold of Saddam Hussein. In Mosul and surrounding areas, more than 150,000 troops fled their posts as the militants advanced, leaving behind thousands of weapons, including tanks and helicopters, that are now in ISIL’s possession, said Jabbar Yawer, a spokesman for ethnic Kurdish armed forces in Erbil. The speed with which ISIL and its allies have advanced after their seizure on Tuesday of Mosul – a city of two million people – has sent alarm bells ringing not only in Baghdad but in western capitals.
The Tweets tell of a monumental collapse. ”Jesus. “30,000 men – simply turned and ran in the face of the assault by an insurgent force of just 800 fighters … Surreal scenes in #Mosul, #Iraq as US trained troops leave behind their uniforms and flee from #ISIS to #Kurdistan. ”

And the West is stuck with Obama in this time of crisis! Lord have mercy. Says Fernandez:

See him as Clint Eastwood saw him. An empty chair; the man who failed at everything including his stint at the Annenberg Foundation and as Illinois legislator; who probably even had his “books” ghostwritten for him. A blank screen, on which he proudly declared everyone could project their fantasy. His inability to think a new thought is nowhere more clearly illustrated than in his unshaken desire to release even more hardened terrorists from Gitmo. He is marching to some invisible drummer, pursuing a vision of greatness some once believed was visionary but which turns out to be merely delusional.
The most vital requirement in stopping a crisis is changing leadership. While companies fire CEOs and generals are relieved in defeat and some presidents with decency tender their resignations in shame when faced with failure, the Republic is stuck with Barack Hussein Obama, the man for whom all problems are somebody else’s fault; whose basic instinct is to sit down on a stump with his head and his hands and whine bitterly about Ted Cruz.

The political, military and historical debates will once again now begin in earnest, but as I say, as all this horrible Islamic bloodletting once again fills our television screens, it is the situation of the church in Iraq that is also so very worrying.

Churches are being destroyed and Christians massacred there, yet I have already had Christians here telling me we should not get involved, it is none of our business. Go figure! I immediately thought of Matthew 25:31-46, the story of the sheep and the goats told by Jesus. There he said he would judge people in part by how we treated him – and by that he meant how we treated his people. Consider verses 41-45:

Of course we have an obligation to support fellow brothers and sisters in Christ who are being slaughtered elsewhere. Eric Metaxis discusses Rev. Canon Andrew White, the so-called “Vicar of Baghdad”: “I just received word that Canon White has issued a plea for help on his blog. That plea is making its way across the Internet, but I want to share with you some of this dear brother’s words. Here’s what he said:

Iraq is now in its worst crisis since the 2003 war. ISIS . . . a group that does not even see Al Qaida as extreme enough, has moved into Mosul, which is Nineveh. It has totally taken control, destroyed all government departments. Allowed all prisoners out of the prisons. Killed countless numbers of people. There are bodies over the streets.
The area is the heartland of the Christian community. Most of our people come from Nineveh and still see that as their home. It is there that they return to regularly. Many Christians fled back to Nineveh from Baghdad, as things got so bad there. Now the Christian centre of Iraq has been totally ransacked. The tanks are moving into the Christian villages destroying them and causing total carnage.

And Michael Brown speaks to how Israel, the only beacon of light in the region, is now once again heavily under threat:

Yet the West will likely again sleep right through all this. And most Western Christians will take the attitude which I referred to above: “How is it any of my business?” The truth is, far more Christians will be worried sick about issues elsewhere, such as the World Cup now being played in Brazil.

We once again need to get on our faces before almighty God and ask for his heartbeat on all these matters. We need to give up our trivial pursuits and pursue whole-heartedly the things which really matter. And caring deeply about what is happening in the world is a major part of this.