Sadly much of what passes for biblical, theological and ethical reflection and talk nowadays consists of little more than bumper sticker clichés and sloganeering. People – even Christians – will dish out to you some tired saying or worn out cliché and think they have added something of substance to a discussion or debate.

I have already penned numerous articles about judging, in which I try to respond to some of the sloppy thinking and mushy moralising about this topic. But it seems the need to think clearly and carefully about this matter keeps arising, so the need for more articles continues apace.

In addition to grossly abusing and misusing such texts as Matthew 7:1 (probably the most mangled and maligned passage in all the Bible), people will offer up quite unhelpful slogans which they think reflects the depths of the biblical understanding on this matter.

For example, many will say this: “We are to judge a person’s sin, but not the person.” Umm, not quite. Yes and no is how we might reply to that one. If these guys simply mean that we cannot infallibly judge a person’s heart as to whether he or she is a true Christian or not, they are quite right. 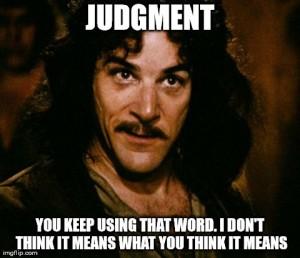 Only God can do that. Only God knows perfectly the human heart and the condition of the soul, so only he can ultimately determine who are truly his and who are not. But of course that is not what I mean by judging, and likely not what many other people mean either.

These people however actually seem to think that we can judge a person’s actions while never judging the person doing those very actions. But this is quite ludicrous if we simply think about things clearly for a moment. Consider a few obvious scenarios:

-A person who regularly engages in theft is a thief. Can we somehow only judge the acts of thievery, without also assessing the character of the one doing it – the thief?

-A person who continuously engages in fornication is a fornicator. The person who does this deserves rebuke and judgment, not just the particular acts themselves.

‘Oh, but is that biblical?’ you ask. Of course it is. The Bible tells us this over and over again. Consider my last example. We have a clear cut case of this in 1 Corinthians 5 of course. The entire chapter deals with the sordid case of not just fornication, but incest no less.

Paul does not pussyfoot around and say that only the act is wrong; he makes it perfectly clear that the person doing it is wrong – and should be disciplined accordingly. Consider what Paul says in the first five verses of this chapter:

It is actually reported that there is sexual immorality among you, and of a kind that even pagans do not tolerate: A man is sleeping with his father’s wife. And you are proud! Shouldn’t you rather have gone into mourning and have put out of your fellowship the man who has been doing this? For my part, even though I am not physically present, I am with you in spirit. As one who is present with you in this way, I have already passed judgment in the name of our Lord Jesus on the one who has been doing this. So when you are assembled and I am with you in spirit, and the power of our Lord Jesus is present, hand this man over to Satan for the destruction of the flesh, so that his spirit may be saved on the day of the Lord.

Do you see what he says there? He has “already passed judgment in the name of our Lord Jesus” not just on a mere act, but “on the one who has been doing this”! Yes, Paul actually judged a person. He would have none of this rather sanctimonious and unbiblical foolishness about how we cannot judge people, only their sins.

That is just baloney. Of course we can and should judge people – as well as their sins. We are commanded to do so. Simply read the concluding verses of this chapter, vv. 9-13:

I wrote to you in my letter not to associate with sexually immoral people – not at all meaning the people of this world who are immoral, or the greedy and swindlers, or idolaters. In that case you would have to leave this world. But now I am writing to you that you must not associate with anyone who claims to be a brother or sister but is sexually immoral or greedy, an idolater or slanderer, a drunkard or swindler. Do not even eat with such people. What business is it of mine to judge those outside the church? Are you not to judge those inside? God will judge those outside. “Expel the wicked person from among you.”

Just in case you missed it, let me repeat what he said: “Are you not to judge those inside?” This is of course what is known as a rhetorical question. He fully knows the answer to this, and he expects the foolish Corinthian believers to also know the answer to this.

There are of course plenty more such texts we can appeal to here. Let me close with just one more. I refer to the time when Paul rebuked, judged, condemned, slammed (choose your own word here) Peter. It was not just his actions or wrongdoings that Paul condemned and judged, but Peter himself. See what he says in Galatians 2:11-14:

When Cephas came to Antioch, I opposed him to his face, because he stood condemned. For before certain men came from James, he used to eat with the Gentiles. But when they arrived, he began to draw back and separate himself from the Gentiles because he was afraid of those who belonged to the circumcision group. The other Jews joined him in his hypocrisy, so that by their hypocrisy even Barnabas was led astray. When I saw that they were not acting in line with the truth of the gospel, I said to Cephas in front of them all, “You are a Jew, yet you live like a Gentile and not like a Jew. How is it, then, that you force Gentiles to follow Jewish customs?”

Here was a stinging public rebuke, or act of judging. He judged Peter, and he judged him publicly. What he was doing was wrong and he had to be strongly judged to prevent further harm from taking place. Of course the biblical principle runs like this: private sin, private rebuke; public sin, public rebuke.

But the point is, Peter was judged by Paul. He saw no hard and fast distinction between what Peter did and Peter himself. Peter was clearly in the wrong here, and it was Peter who had to be confronted, challenged, judged and rebuked. Paul had no problem with this at all.

Sure, we assume that Peter thereafter repented, and Paul then forgave him. But throughout the Bible God judges people, and we are told to do the same. Of course we must do this in a spirit of humility, bathed in prayer, and without any hypocrisy (which is the real meaning of Matt. 7:1-5).

So let us all be careful here to stick closely to the biblical text, instead of relying on trendy but unhelpful clichés and slogans. Christians of all people should avoid bumper sticker ethics and dodgy theology, and instead run everything through the grid of Scripture.

2 Replies to “Dealing With Clichés About Judging”