Sometimes you just gotta wonder how much dumber we can get, how much more politically correct we can get, and how much more appallingly “inclusive” and “tolerant” we can get. The latest move by the AFL has many heads spinning – mine included. Why can’t they just play football anymore?

Why does everything have to be so politicised? Why does the AFL have to insist on pushing its PC credentials nonstop? Why does it make so many dopey moves to placate various minority groups? The head honchos at the AFL are amongst the most PC lefty loonies around it seems. 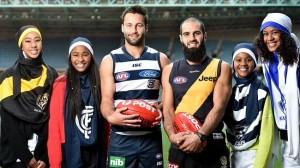 They have already bent over backwards to make the AFL homosexual-friendly. But whatever for? So that maybe one player feels “included”? There is likely at least one satanist AFL player, or some fan who is into Wicca, or a pipe-smoking coach. Will the AFL promote these beliefs and lifestyles as well, all in the name of inclusion?

Now we have yet another politicised weekend. Indeed, it seems there are hardly any non-event weekends left in the AFL season where football and football alone is the sole focus. So this weekend we have to have a multicultural round. Yep, and it does not stop there.

The AFL thinks we now need sharia-friendly football gear as well. I kid you not. Here is how the story goes:

Muslim head scarfs in the colours of every AFL team will go on sale from today, in the lead-up to the league’s multicultural round. League boss Gillon McLachlan will announce the AFL-approved headwear range at an AFL breakfast in a speech outlining how important it is the football code embraces all cultures.
Bachar Houli, a trailblazer for Muslims in the league, said it was “a huge thing’’ for Muslim women who were passionate about footy. “There are so many Muslims who attend the footy, but at times don’t feel like they are part of supporting their team,’’ he said. “This is a fantastic thing, because now they can wear their football team colours on their scarf, feel like they are part game.”
Designer Shanaaz Copeland stumbled on the idea when she dropped her daughters at school on footy day, when children were wearing AFL jumpers with traditional head scarfs. She hoped the range would empower Muslim girls and women and help break down barriers.

Umm, yeah, sure. I get it. Sounds like a wonderful plan. But they of course have not gone far enough here. Is the AFL really interested in multiculturalism? Does it really want to embrace all cultures? If so, why pick just one – out of thousands – of cultures, races, religions, creeds, lifestyles, and ethnic groups? Why just one? Are there not a few other groups that could be included here?

I would have thought there might be a number of Scottish players and spectators out there. Will the AFL be making kilts available one weekend so that they don’t feel left out?

Surely there are many chain-smoking AFL fans out there. Will the AFL come up with a tobacco round, and market specially designed footy cigs?

We know that plenty of AFL players and fans are divorced. So when does the next divorcee round take place? Will the AFL offer marriage break-up jumpers as well?

There is no question we have some Christian players, and many devout Christians who cheer on their fav teams each week. So when do we get a Christian weekend? Will AFL clothing with crosses be made? Or Bibles printed with the AFL logo on them?

I know that many footy fans are really keen on Mexican food. Will there be a Mexican round, complete with AFL tacos for sale?

There are many keen AFL fans from the underworld. Will we have a criminal appreciation weekend sometime? Maybe all criminals can get a free football with a golden gun pic embossed on it or something.

And obviously there are many fine nudists out there who love their footy. So when does the AFL offer a nudie round? It could let in everyone for free who comes in their birthday suit.

I am sure there are some Sikhs who love Geelong or Collingwood. Can we have a Sikh weekend soon? Of course all baptised Sikhs must carry at all times the kirpan, the ceremonial dagger. I am sure the MCG security team will have no problem with this – after all, we want them to feel right at home.

Just think of all the tuba players out there who are Carlton fans. So when do they get their weekend?

There have to be many footy fans who are also fanatic about all things Star Wars. So when is the Star Wars weekend coming up, and do I get in for free if I wear a Darth Vader costume?

After all folks, the name of the game is to make everyone feel inclusive and welcome. So the AFL will obviously have to lengthen the footy season to make way for all these extra themed weekends. Not to do so would be highly discriminatory on the part of the AFL.

So come on AFL – get your act together. Let’s offer some genuine multiculturalism here, and some true inclusion. Highlighting just one or two groups while ignoring all the others is just bad form. Time to lift your game AFL.