And so it ends. The adventure is over. At least the adventure that started four books ago and/or six films ago. Presumably this is all we will see from Peter Jackson concerning the film adaptation of the works of Tolkien. My family finally saw the third and last instalment of his Hobbit trilogy, and it is time for a report.

Let me begin by saying that I have long loved reading The Hobbit and the three-volume The Lord of the Rings. And I have enjoyed the six films which are now all out as well. As I have so often said, the books – and films – make so very vivid the truths that we are in a war, that sometimes battle is called for, that good things are worth protecting, and courage and sacrifice are so often the need of the hour. 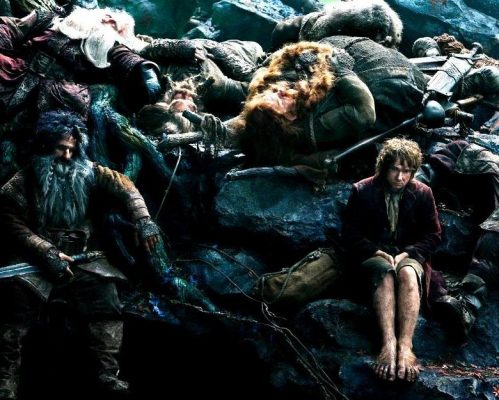 Indeed, I relate so much to the hobbits, who much prefer peace and quiet to war and adventure. I too would much rather just sit at home and read a book. But that is not possible when all that we hold near and dear is under direct and sustained attack. Thus I love the books, and have also greatly loved seeing each new film as it has come out.

And yes, I know the purists are not happy. Who could hope to get it fully right in the eyes of diehard Tolkien fans? The six films have many critics for many reasons: leaving out Tom Bombadil altogether, adding a love interest and adding Legolas in The Hobbit, etc, etc.

And of course Jackson milked the success of the LOTR for all its worth, turning a children’s book into another three-part film, a replica of his first successful trilogy. Yes, I know, the films are certainly far from perfect. But I am not sure I will see in my lifetime another 20 hours or so of film adaptation of the four books done as good as this, all things considered.

But it is not his film version of events that concerns me here, but the entire hobbit project. I wish to speak about the hobbits, the Shire, adventure, warfare, heroism, and much more. And this of course is the stuff of these four volumes. Early on for example we meet Bilbo Baggins and learn of his love of home, comfort, and security.

When Gandalf the wizard arrives, “looking for someone to share in an adventure,” this is the last thing that he wants. It is the same with Frodo, Sam and the other hobbits in the LOTR. They too love the Shire and simply want to enjoy it endlessly. But all these hobbits come to realise that in order to enjoy the Shire, they must be willing to do all that it takes to save it and protect it when it comes under attack.

In The Hobbit Thorin tells Bilbo that he is a homebody, and that he does not belong with this group. Bilbo tells the critical Thorin in the film version: “I know you doubt me, I know you always have, and you’re right. I often think of Bag End. I miss my books, and my armchair, and my garden. See, that’s where I belong; that’s home, and that’s why I came cause you don’t have one… a home. It was taken from you, but I will help you take it back if I can.”

The hobbits do change. Bilbo and the other hobbits grow in courage and valour, and they come to see the importance of fighting for what is right. They cannot pretend to simply sit things out as battles wage all around them. There is a time and place for fighting, and risking one’s life for a greater good. As we read in The Two Towers:

‘For myself,’ said Faramir, ‘I would see the White Tree in flower again in the courts of the kings, and the Silver Crown return, and Minas Tirith in peace: Minas Anor again as of old, full of light, high and fair, beautiful as a queen among other queens: not a mistress of many slaves, nay, not even a kind mistress of willing slaves. War must be, while we defend our lives against a destroyer who would devour all; but I do not love the bright sword for its sharpness, nor the arrow for its swiftness, nor the warrior for his glory. I love only that which they defend: the city of the Men of Númenor; and I would have her loved for her memory, her ancientry, her beauty, and her present wisdom. Not feared, save as men may fear the dignity of a man, old and wise.’

A just-released book looks at these and related themes in detail. The Hobbit Party: The Vision of Freedom That Tolkien Got, and the West Forgot by Jonathan Witt and Jay Richards (Ignatius, 2014) is well worth grabbing. In it the authors examine Tolkien on freedom, politics, economics and warfare.

Concerning the last-mentioned item, the authors remind us that Tolkien had firsthand experience of this, and was no pacifist, believing freedom was worth fighting for. Having fought in the trenches in WWI, Tolkien knew full well of the horrors of war, but he also knew that sometimes war is necessary. As the authors state:

A free society for Tolkien isn’t merely something that’s nice if you can get it; it’s worth laboring, fighting, and dying for. The reason the free peoples of the West fight Mordor is to preserve their freedom, which requires that they resist slavery and subjugation he offers them at the point of the sword.

Gandalf fights over and over again in The Hobbit and The Lord of the Rings, and he badgers men who are inclined not to fight against a wicked enemy. Throughout The Lord of the Rings, Gandalf’s job is to rouse the forces of the West to resist the ambitions of Sauron with swords, arrows, and other tools of war. Given the way both the narrator, the other wise characters, and the fruits of Gandalf’s advice point toward him being a seat of great wisdom, the lesson seems clear: to prematurely beat swords into ploughshares is not just foolish but immoral when the swords are needed to protect the innocent.

And the moral development of the hobbits in such times of danger and war is also an important theme for Tolkien. The hobbits move on from being mere creatures of comfort who love their own homes, to brave warriors who know that to protect their homeland means willingness to fight and die if need be:

We see this process of developing the heroic capacity in the character of Bilbo. He begins as a decidedly unheroic hobbit, but that gradually changes in the course of his adventures. . . . .When the companions finally arrive at the Lonely Mountain, Bilbo has built up heroic capital he didn’t have before he left the Shire. This is a good thing, since he soon finds himself descending the tunnel to the inner part of the mountain fortress, where he knows the dragon Smaug lies in wait. The tunnel reminds him of Bag End. “If only I could wake up and find this beastly tunnel was my own front-hall at home”, he wishes, even as he continues down the tunnel, possibly to his own death. “Going on from there was the bravest thing he ever did”, the narrator tells us. “He fought the real battle in the tunnel alone, before he ever saw the vast danger that lay in wait.” His heroism consisted not in his military exploits, but in his moral courage, his willingness to do what he ought, even if, as seemed likely, his own death be the result.

As I mentioned, I feel so hobbit-like: I would much prefer to enjoy the comforts and quietude of my own home, quietly reading a book and so on. But given the gravity of the hour, this is a luxury none of us can afford. We have a job to do, and that will mean getting our hands dirty, taking on real enemies, and paying a price for standing for what is right.

The truth is, we are in a war. Yes it is ultimately a spiritual battle, but it is fought on many levels. We all must get involved, and be willing to take up arms to defend what we value so highly. Sure, in most cases these will not be the arms of physical war, but other types of weaponry.

It may mean simply standing up for Christ when a group of your work colleagues are busy denigrating him. There are a million battle fronts, and a million ways we can and must get involved. As Gandalf states in The Battle of the Five Armies, “You have but one question to answer: How shall this day end?”

What will we do as we find ourselves in the midst of battle? How will we respond? Will we engage, or seek to run and hide? If courage is not your strong suit, then perhaps reading these books or watching these films will help to arouse it in you.

Whatever it takes. But we must not pretend things can any longer be business as usual. Each day gets darker, as anti-faith, anti-freedom and anti-family forces grow stronger and more bold. What will we do to protect what is of value to us? Will we leave the comforts of the Shire to protect the Shire, or will we seek to hide from the face of battle, and thus lose the Shire altogether?

The choice is up to us.