Where in the world did we ever get the idea that to be a good Christian means to check our brains in at the doorstep of church? How did we ever get to the place where we glory in a brainless Christianity, and refuse to use the brains God gave us to think his thoughts after him?

Why have we become the most anti-intellectual generation in church history? Why are there so many professed believers who think like pagans, talk like pagans, and therefore act like pagans? I continue to be amazed at the complete lack of a Christian mind in so much of the church today.

We are told in Scripture that “My people perish for lack of knowledge” (Hosea 4:6). Yep, they sure do, and they sure are. We see everywhere today in the West people claiming to be Christians who haven’t a clue about their own faith and their own biblical worldview. 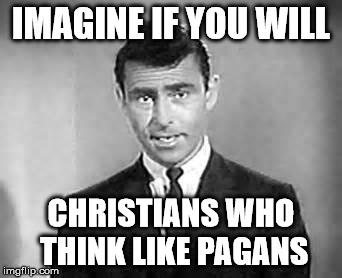 They have simply soaked up everything the world around them offers, and are unable or unwilling to think biblically, critically and carefully. And in refusing to think for the glory of God, they are living in deliberate disobedience, and need to repent.

Repent for not thinking? Of course. This should be a no-brainer (pun more or less intended). We are told with absolute clarity what the greatest commandment is by Jesus himself. So why don’t we start believing him – and obeying him – for a change?

All the Synoptic Gospels contain this commandment: ‘love God with all your heart, mind, soul and strength’ (Matthew 22:34-40; Mark 12:28-34; Luke 10:25-8). Jesus says this is the “greatest commandment”. That means it is to be our number one priority, and it is not mere advice.

Yet how few Christians actually obey Jesus in this regard? We seem instead to relish in brainlessness and rank stupidity. Being a fool for Christ is one thing, but being a fool because you refuse to love God with your mind is quite another thing. God will not hold us guiltless for so blatantly and recklessly disobeying his greatest commandment.

Because of my ministry I sadly run across this occurring every day. People claim to be believers yet have clearly decided that having a lobotomy is the high-water mark of Christian spirituality. They seem to relish in their ignorance and biblical illiteracy.

And it shows big time in the key issues of the day. Let me just offer a few quick examples of this. Having just recently penned a piece on the Bible and abortion, I have had a number of clueless wonders come out to attack me, offering the same mindless pro-abortion mantras that our secular friends do.

It is quite shocking to see people who claim to be disciples of Jesus just parroting all the foolish baloney of the pro-aborts, thinking they are somehow being good Christians in the process. It is utterly incomprehensible to me to see these people pouring forth the worldview of secular humanism, while pretending to be Christians.

Whether clueless, wilfully ignorant or deceived, or simply wolves in sheep’s clothing, I continue to be amazed by the number of people who do this on a regular basis. It bothers me greatly that those claiming to be followers of Jesus can get it so very wrong on something so vitally important as the sanctity of human life.

One fellow recently threw this at me: “the truth is abortion is up to the individual and what they see is the right thing to do, Biblically speaking there is no direct quote that says ‘Do not have you [sic] unborn child killed inside you’.” Wow, mind-numbing stuff here.

Did this guy ever hear of the sixth commandment? Murder is prohibited – the killing of the unborn is just that. He might as well foolishly say that rape is up to the individual, or arson, or murder. Once again, he simply has coughed up worldly secular thinking here, while still claiming to be a Christ-follower.

This guy went on to say this foolishness: “it is not the jobs of Christians, Pro life activists or any one [sic] to tell any person they are doing wrong.” Oh really? So if a murderer was about to strike this guy down with a baseball bat, I have no right to open my mouth and say anything?

If his mother was about to be raped by a gang of thugs, I would be out of place to say that this is wrong, and in fact seek to intervene? Talk about a mindless Christian. Of course we have a biblical obligation to point out evil – and resist it as well.

But by the convoluted thinking of this guy, Wilberforce was quite wrong – and unbiblical – to stand up for blacks and challenge the slave owners. This fellow went on to suggest that non-Christians cannot be held to our morality, and we are not to lecture them about right and wrong.

Oh really? If this guy would just for one minute actually put the mind God gave him to some use, he would realise just how utterly foolish such remarks are. By that twisted reasoning, no non-Christian should ever be brought to court for running a red light, robbing a bank, or shooting an innocent bystander.

Sorry jack, but we are all moral beings made in God’s image and live in a moral universe. And we are responsible for our choices and actions. I most certainly will tell anyone – whether they are a Christian or not – that murdering innocent babies in the womb is not right, and I will do all I can to protect such babies.

That is not just my Christian responsibility, but my moral obligation as a member of the human race. Even non-believers know that it is right to speak out in defence of the innocent, so why can’t believers do the same? But the ability to think carefully and engage in moral reasoning seems to be at an all time low amongst so many Christians today.

Another guy claiming to be a Christian tried to tell me that Jesus would counsel abortion for a woman who was raped – Jesus certainly would not force her to carry the baby. He really thought this was the Christian thing to do, and what believers today should do as well.

I replied by stating that pregnancy due to rape is really quite rare, and even if it does occur, how is it Christian to kill the baby? I suggested that he listen to what those who were conceived in rape have to say about this, instead of simply rehashing the usual pro-abort red herrings: www.rebeccakiessling.com/Othersconceivedinrape.html

I also asked how offering the biblical data on abortion means that anyone is being forced to do anything? In a democracy prolifers have the same rights as anyone else to argue their case. What does this have to do with coercion? I am always so appalled when I hear people claiming to be Christians trotting out all the usual mantras dished up by the secular humanists and pro-aborts.

But such is the day we live in. Critical Christian thinking and reflection seem to be in short supply nowadays. Trying to find a believer who actually has a biblical worldview is becoming more and more rare. Instead we have masses of zombie-like believers who have never once challenged the world and its thinking, and are instead slavishly conformed to its image.

No wonder the church is having almost zero impact on the surrounding culture. When it thinks and talks and acts just like the world, why should anyone pay it any attention? The early church thrived and grew by leaps and bounds by being radically counter-cultural.

And that began with radical biblical thinking and reflection. The early disciples thought, and thought carefully, about what their faith meant in a hostile culture. They refused to be conformed to the image of the world around them, but stood out like a sore thumb, because they thought and acted biblically.

We desperately need that today. Where are the believers who have a biblical worldview and are acting on it in every aspect of life? Please God raise up a generation of believers who will fully obey you, and love you with their minds as well as their emotions.

Let me close with the words of Martyn Lloyd-Jones: “The great trouble in the Christian life is ever that we must re-learn how to think. The old way of thinking is of no value here; we are in an entirely new realm. So that is why the Apostle says, at the end of 1 Corinthians 2, ‘We have the mind of Christ’ (v 16). We need this mind, and we must learn to cultivate and to develop it and to let it govern our thinking on all these various problems and difficulties.”

20 Replies to “Paying the Cost for Brainless Christianity”