Fifty years ago Winston Leonard Spencer-Churchill died. He was born on November 30, 1874, and died on January 24, 1965. He was without doubt one of the greatest leaders of last century, and his legacy will forever be with us. This great man was raised up at the right time during some of the darkest hours of human history.

I have often written about him, especially in relation to the Second World War. He was often a lone voice warning about the rise of the Nazis, and he fiercely resisted the naive and dangerous appeasement of those like Chamberlain. As he rightly said, “An appeaser is one who feeds a crocodile, hoping it will eat him last.” 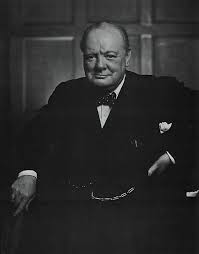 Yet his was a voice calling out in the wilderness, and as a result, the world had to lose tens of millions of lives in what Churchill called a preventable war. He knew about the threat of Hitler, and he knew what was at stake if he was allowed to proceed unchecked.

He was fully aware of how very important things were, and how much Western civilisation hung in the balance. For example, as German fighter bombers attacked British cities in mid-1940, Churchill delivered a powerful speech early on to rally the troops. Just a week after the French had surrendered to the Germans, he spoke in the House of Commons on June 18, 1940, ending with these words:

What General Weygand called the Battle of France is over. I expect that the Battle of Britain is about to begin. Upon this battle depends the survival of Christian civilisation. Upon it depends our own British life, and the long continuity of our institutions and our Empire. The whole fury and might of the enemy must very soon be turned on us. Hitler knows that he will have to break us in this Island or lose the war. If we can stand up to him, all Europe may be free and the life of the world may move forward into broad, sunlit uplands. But if we fail, then the whole world, including the United States, including all that we have known and cared for, will sink into the abyss of a new Dark Age made more sinister, and perhaps more protracted, by the lights of perverted science. Let us therefore brace ourselves to our duties, and so bear ourselves that, if the British Empire and its Commonwealth last for a thousand years, men will still say, “This was their finest hour”.

Because oceans of ink have been poured out on this incredible man and his leadership during this awful war, there is no need for me to reinvent the wheel here. Victor Davis Hanson has just penned a great piece entitled “Remembering the Last Lion”. Let me offer parts of this here:

Britain was the only major power on either side of the war to fight continuously the entire six years, from September 3, 1939, to September 2, 1945. Britain was the only nation of the alliance to have fought Nazi Germany alone without allies. Churchill’s defiant wartime rhetoric anchored the entire moral case against the Third Reich.
Unlike the Soviet Union or the United States, Britain entered the war without being attacked, on the principle of protecting independent Poland from Hitler. Unlike America, Britain fought Germany from the first day of the war to its surrender. Unlike Russia, it fought the Japanese from the moment Japan started the Pacific War to the Japanese general surrender.
Churchill’s Britain had a far smaller population and economy than either the Soviet Union or the United States. Its industry and army were smaller than Germany’s. Defeat would have meant the end of British civilization. But victory would ensure the end of the British Empire and a future world dominated by the victorious and all-powerful United States and Soviet Union. It was Churchill’s decision that Britain would fight on all fronts of both the European and Pacific theaters….
The wisdom and spirit of Winston Churchill not only saved Britain from the Third Reich, but Western civilization from a Nazi Dark Ages when there was no other nation willing to take up that defense. Churchill was the greatest military, political and spiritual leader of the 20th century. The United States has never owed more to a foreign citizen than to Winston Churchill, a monumental presence 50 years after his death.

Yes, the whole world is indebted to this great man. It is hoped our memory of him and his achievements will never fade. Indeed, he has left us with plenty of memorable quotations. So let me finish with just a few of his many remarkable and stirring quotes. Of course we could highlight his cutting wit and acerbic humour, as in these famous remarks:

“He has all the virtues I dislike and none of the vices I admire.”

“A modest little person, with much to be modest about.”

But let me instead focus on his great comments, especially in association with WWII:

“To build may have to be the slow and laborious task of years. To destroy can be the thoughtless act of a single day.”

“May God prosper our arms in the noble adventure after our long struggle for King and Country, for dear life, and for the freedom of mankind.”

“Today is Trinity Sunday. Centuries ago words were written to be a call and a spur to the faithful servants of truth and justice: ‘Arm yourselves, and be ye men of valour, and be in readiness for the conflict; for it is better for us to perish in battle than to look upon the outrage of our nation and our altars. As the will of God is in Heaven, even so let it be’.”

“This is no time for ease and comfort. It is the time to dare and endure.”

“Courage is going from failure to failure without losing enthusiasm.”

“If you are going through hell, keep going.”

An American veteran who was part of the D-Day invasion described meeting Churchill prior to the launch of that bloody offensive against the forces of Nazism. He said D-Day was the most frightening experience of his life. “In fact,” he said, “I don’t think some of us would have been able to do what we did if it weren’t for a visit we got just before we crossed the English Channel.” That visit was from Winston Churchill. He rode up in a jeep, got out, and mingled with the troops. “He shook hands with us and even hugged some of us,” the veteran recalled. “He spoke of his own wartime experience and identified with our emotions. Then, he stood up in his jeep and gave a five-minute speech. He spoke the whole time with tears in his eyes.” Here’s what Churchill said: “Gentlemen – I know you are afraid. I remember being afraid when I was a soldier. I had the privilege of defending my country…through dark days when we didn’t know whether we would accomplish what we had been given to do. But this is your moment. We are counting on you to rise to the occasion and achieve everything you have set out to do. The fate of the free world rests on your shoulders. May this be your finest hour.” The veteran said, “Needless to say, our group of frightened soldiers turned into a band of men who were ready to take on anybody.” Togetherness – it’s a powerful thing when you put it into practice!