Various days in recent history have gone down in infamy. The events associated with these days are now forever etched on our social memories, and we dare not forget any of them. One thinks of November 9–10, 1938 for example. Known as Kristallnacht, it was the terrible anti-Jewish pogrom in Germany.

We also all remember December 7, 1941, the Japanese attack on Pearl Harbor, which dragged the United States into the Second World War. Of course September 11, 2001 is a day of Islamic terror which can never be forgotten. Another infamous date which is a blot on human history we actually commemorate today. 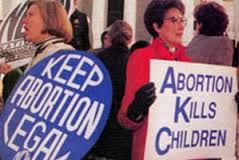 Forty-two years ago the American Supreme Court issued its decision on Roe v Wade, with a 7-to-2 majority vote striking down the laws on abortion in 50 states, and effectively creating open slather on baby killing. This was one of the most important and far-reaching court cases in American history.

And we still live with the legacy of this today. Indeed, the legacy is a deadly one: those killed by abortion far outstrip the number of people killed by the Nazis. As far as we can tell, some 58 million unborn babies have been slaughtered in the US since this fateful day.

As one article puts it, “The United States marks 42 years of legalized abortion in all fifty states at any time for any reason throughout pregnancy on January 22nd, the anniversary of the Roe v. Wade Supreme Court decision. Since that time, there have been approximately 57,762,169 abortions that have destroyed the lives of unborn children.”

After explaining how this figure was arrived at, the article continues,

The long term trend is fewer abortions, and the number is down significantly from 1990 when the country saw 1.6 million abortions a year. As one measure of the impact your work has had, if the number of abortions had remained at 1.6 million, more than seven MILLION more babies would have died….
Despite the seeming precision, this is not an exact number. No such number is possible. There will always be missed abortions, missed abortionists. Adjustments, however careful, will always be imprecise. But given the data we have, we feel it is reasonable to assume that we have now seen at least 57 million lives lost since Roe. Of course, we all know that we are talking about more than just numbers or statistics. The blood of more than 57 million aborted babies represents an enormous stain on our national conscience and a heavy burden on our hearts.
But these numbers also show us that our efforts have not been in vain. As noted above, if our nation had continued at the rate of 1.6 million abortions a year we saw in 1990, our cumulative total would have been approaching 64 million by now.
That would translate into approximately 7 million more babies alive today than would have otherwise been the case. That is the equivalent to the number of abortions performed over a span of six to seven years–living human beings alive today because of you!

Just a few days earlier US President Barack Obama delivered his penultimate State of the Union Address. In it he too noted the decline in abortion numbers, yet also again affirmed his commitment to abortion on demand. Incredibly, he tried to tell us how much he respects human life.

He said that “as Americans, we respect human dignity” and that “we are a people who value the dignity and worth of every citizen”. Yeah right. In the same breath he reaffirmed the importance of a woman’s right to kill her own baby. Dr. Alveda King, niece of the late Dr Martin Luther King, was quick to show his hypocrisy.

She quotes her uncle who said, “The Negro cannot win if he is willing to sacrifice the future of his children for personal and immediate comfort and safety.” She went on to say this: “What the President didn’t say is that abortion and abortifacients are not health care. They are reproductive deterrents that kill babies and sometimes their mothers. Abortion often hurts women.”

Or as Tony Perkins, President of the Family Research Council said: “While pointing to a decline in the number of abortions, he failed to mention that the taxpayer funding of abortion within ObamaCare, which violates the conscience of millions of Americans, threatens to reverse this decline.”

The truth is, as I have documented so often before, Obama is the most pro-abortion President the US has ever had. He has no concern whatsoever for the slaughter of the innocents, and has done all he can to ensure that the mass killings continue unabated.

As respectfully as I can, I have to say to the President that this is simply inexcusable and insufferable ignorance. I can think of no more laughable moral platform than that which gives pretense to valuing the lives of children, while at the same time declaring that the most defenseless and the most vulnerable among them should be denied the human right of life.
This is moral cowardice in the extreme. It is ideology’s complete triumph over integrity and justice. And it renders the President’s words a hollow and hypocritical sham.

Of interest, on the same day that we look back in such great shame, we also have a move underfoot to start turning things around in the nation’s capital:

The Republican leadership of the U.S. House of Representatives indicates that it intends to bring a major pro-life bill to the House floor for a vote on Thursday, January 22, 2015. The bill is the Pain-Capable Unborn Child Protection Act (H.R. 36), which would extend general protection to unborn children nationwide beginning at 20 weeks fetal age, based on congressional recognition that by this point in development, if not earlier, the unborn child is capable of experiencing pain. H.R. 36, sponsored by Reps. Trent Franks (R-Az.) and Marsha Blackburn (R-Tn.), is based on model legislation developed by National Right to Life and enacted in 10 states.

Obama went on in his hour-long address to claim that “No challenge? poses a greater threat to future generations than climate change.” Um no. The greatest moral challenge of our time is of course the mass slaughter of unborn babies. To get our heads around the reality of all this, consider these facts:

Abortions peaked at 1.6 million a year in the US in 1990. There are far more deaths due to abortion than from any other cause. Around 600,000 died from cancer that year, another 600,000 from heart disease, and some 120,000 from accidents. Nothing compares to this abortion killing machine.

No nation can last for long when it treats its own next generation with such contempt and hatred. I look forward to the day when another date is celebrated and commemorated: the day when we finally declare that abortion is a crime against humanity, and will be treated accordingly.

11 Replies to “The Horrific Legacy of Roe v Wade”