If there is a constant and major objection raised to Christianity, it is the topic of the Crusades. Critics claim that this was a terrible blight on Christianity, and demonstrates that this is an evil and bloody religion, just as bad as Islam or other evil movements.

But as is often the case, we tend to hear a rather biased and distorted picture of what the Crusades in fact were all about. Here I want to offer a few remarks challenging much of the mythology out there. Of course much ink has been spilt on this topic, so I can only hope to offer the briefest of commentary here.

I begin with the words of historian Thomas Madden whose very important volume The New Concise History of the Crusades needs to be in the library of all those concerned about this topic. He begins his incisive study by saying, “The crusades are today one of the most misunderstood events in western history. That fact is all the more lamentable given that in the last fifty years legions of scholars from around the world have produced an enormous amount of research on the subject.” 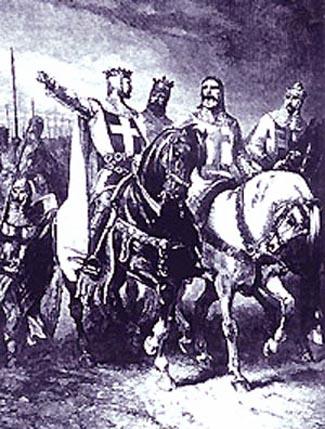 With this in mind, let me offer a few historical details. There were seven major Crusades, beginning in 1095 when Pope Urban II called the first Crusade. The crowd responded to this with the words, “God wills it!”. In July 1099, after a bloody battle, they took Jerusalem. This may have been the only “successful” Crusade. The final crusade finished in 1291.

Looked at one way, the Crusades were simply the reaction of the Christian West to more than three centuries of Islamic expansion, mistreatment of Christian populations in the Holy Lands, and harassment of religious pilgrims. Islam was on the offensive, and the Christian West needed to respond.

Indeed, for the first 100 years Islamic expansionism showed no signs of being halted. Muhammad died in 632 and in the next century his followers broke out of their small enclave to take over much of surrounding territory. In the first few decades Egypt, Palestine, Syria, and Persia had been conquered, and at the time of the battle of Tours in 732 Islamic expansionism extended from Spain to Persia.

By the time of the first Crusade Palestine had been under Muslim occupation for almost four hundred years. Christians were often prevented from going on pilgrimages to visit the holy places, and many were killed when they tried to do so. Christians in Jerusalem often suffered terribly under Islamic rule. Christians therefore wanted to reclaim the Holy Land from the Muslims, and reclaim it as part of Christian Europe.

Another very important work on this subject is God’s Battalions: The Case for the Crusades by Rodney Stark. This is must reading for anyone wishing to get some mastery of the topic, and to disabuse themselves of all the mythology that is out there. I said the following in my earlier review of his book:

Stark reminds us that Muhammad told his followers, “I was ordered to fight all men until they say ‘There is no god but Allah.’” Therefore a century after his death vast swathes of territory hung under the bloody sword of Islam.
And what of the conquered Christians living under Islamic rule? They, along with Jews, were known as dhimmis. While revisionist historians and Muslim apologists speak of Muslim tolerance here, the “truth about life under Muslim rule is quite different”.
Indeed, the subject peoples had few options: death, enslavement or conversion were the only avenues open to them. Dhimmitude was no picnic. Death was the fate of anyone who dared to convert out of Islam. No churches or synagogues could be built. There was to be no public praying or reading of Scripture. They were at best treated as second-class citizens, and at worst, punished and killed.
And massacres of Jews and Christians were quite common in the centuries leading up to the Crusades. In 1032-1033 in Morocco alone, there were over six thousand Jews murdered. Jerusalem fell to the Muslims in 638. The Dome of the Rock was built from 685 to 691, and churches and synagogues were levelled in the ensuing centuries.
The condition of Christians in Jerusalem was pretty appalling during this period, as was the plight of penitent pilgrims seeking to enter Jerusalem. They suffered much persecution, and risked their lives simply to travel to the holy city. The destruction of the Church of the Holy Sepulchre – along with thousands of other Christian churches – under the bloody reign of Tariqu al-Hakim at the end of the first millennia simply served as the climax to all this misery and outrage.
It is in this light of six centuries of Islamic conquest, bloodshed and tyranny that the Crusades must be viewed. They were not always pretty, but life in general back then was not pretty. If Crusader excesses took place, this was just par for the course, as excesses by Muslims and others were more than commonplace.
As Stark reminds us, “Granted, it was a cruel and bloody age, but nothing is to be gained either in terms of moral insights or historical comprehension by anachronistically imposing the Geneva Convention on these times.”

Or as Patrick Sookhdeo wrote in The Challenge of Islam to the Church and its Mission, “sadly both sides fought according to the norms of the time, shocking though it seems today.” But just how successful the whole endeavour was, and how much can be reconciled with Christian teachings is of course an important set of considerations here. As Sookhdeo said,

many recognize that there was a need to defend the vulnerable Christians of the Holy Land. Thus the First Crusade was an understandable (possibly justifiable) belated response to the initial Muslim aggression in the first expansionist jihad which conquered and subjugated vast Christian regions and which posed a continuing threat to Christians in the Middle East and to Europe itself. Subsequent Crusades were, however, less easy to justify.

Or as two former Arab Muslims, E. M. Caner and E. F. Caner wrote in their helpful volume, Christian Jihad, which examines just war theory and the Crusades: “Though the First Crusade ended in victory, it represented a quantum shift in the theology, thought, and ethics of the Christian community. For the first time in history, an army was gathered under the aegis of the cross of Jesus Christ, sanctified by the pope to kill in the name of the Lord.”

Indeed, the move away from a biblically acceptable just war position to a sort of Christian holy war was always going to be problematic. There were often bloody massacres which took place as a result of the Crusades. And it was not just the Muslims who were targeted. Sadly it was often Jews who were slaughtered along the way. And sometimes other Christian bodies (eg, Eastern Christians) were attacked as well.

Now I believe that a case can be made for just wars, which are primarily defensive in nature, and for Christian self-defence, both of which I have argued for elsewhere. See for example:
https://billmuehlenberg.com/2005/08/10/a-review-of-between-pacifism-and-jihad-by-j-daryl-charles/
https://billmuehlenberg.com/2012/12/20/self-defence-and-scripture/

It should also be pointed out that in the Crusades there was a mixture of religious and secular motivations – good and bad reasons. Some were good reasons, as already noted above. But some were bad reasons. One of the worst was the promise of salvation if one fought and died in the Crusades. And often there was the desire for adventure, for wanderlust, to get wealth, etc.

Some wanted just to leave home and head out on a new life. Some were bloodthirsty and just liked to kill, and so on. Thus there was a mix. Some had very selfish motivations. Others had highly righteous motivations. As Madden says however, overall there were good motivations: “For medieval men and women, the crusade was an act of piety, charity, and love, but it was also a means of defending their world, their culture, and their way of life.”

Mention can also be made of the myth that the Crusades have burned in the minds of Muslims for centuries, and have been part of the rationale for things like 9/11 and ongoing jihad attacks throughout the West. Says Stark, this is clearly not the case: “Muslim antagonism about the Crusades did not appear until about 1900, in reaction against the decline of the Ottoman Empire”. Or as Madden puts it:

Westerners may be surprised to learn that Muslims in the Middle East have only recently learned of the crusades. . . . Muslim perceptions of their own history changed in the twentieth century. Rescued from obscurity, the crusades were discovered and given a place of importance that they had never enjoyed before. The “long memory” of the crusades in the Muslim world is, in fact, a constructed memory.

And what about the equally horrific Muslim offensives, such as the sack of Constantinople in 1453? While we constantly hear Westerners today apologising for what we did so long ago, one hardly ever hears Muslims apologising for this event, or the massacre of the Armenians from 1915 to 1917, or dozens of other major Muslim atrocities. Where is all the hand-wringing over these acts? Why are only Western shortcomings highlighted?

In sum, the Crusades were a mixed bag in terms of motivation, outcome, and conformity to biblical morality. Certainly from a New Testament perspective, we have no warrant for killing in the name of Christ. We do have biblical warrant however for such things as just war and self-defence. See more on this here: https://billmuehlenberg.com/2006/09/11/is-it-ever-right-to-kill/

But as is so often the case, the rewriting of history by those who hate Christianity must be challenged. For too long far too much nonsense and just plain falsehoods about the Crusades have been allowed to circulate. Thus seeking to get closer to the historical record is incumbent upon all of us.

24 Replies to “On the Crusades”