The record of Christian history over the past two thousand years is of course a mixed bag, with so much good at times offset with incidents of evil. Fallen individuals, even redeemed fallen individuals, can and do get things wrong. And of course many things done in the name of Christianity were done by those who were Christians in name only.

So not everything done for the past two millennia was done by actual Christians, and if they were true believers, they have at times gotten things wrong. The Spanish inquisition is a case in point here. Of course the critics of Christianity – be they atheists, secular humanists, etc – love to raise this issue, along with the Crusades and the witch-hunts of the past.

But as with these other two incidents, there is so much hype, falsehood, exaggeration and misinformation swirling all around that some qualifications and corrections need to be offered to clear up the record. I do not do this as an excuse, but to offer some historical accuracy and balance to what has often been an emotive and wildly misunderstood topic. 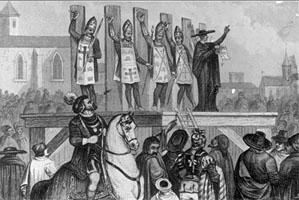 At the outset it can be said that there have been various inquisitions in various places over the centuries. There were various main waves of it, and these are some important dates to be aware of:
1163 – Pope Alexander III told the bishops to stamp out heresy.
1213 – The Fourth Lateran Council gathered by Pope Innocent III in part condemns various heresies.
1233 – Pope Gregory IX established the papal Inquisition.
1472 – Isabella and Ferdinand helped to establish the Spanish Inquisition.
1542 – Pope Paul III started hunting down Protestants, especially Calvinists.

Here I primarily want to consider the case of the Spanish Inquisition, officially started by a papal bull issued by Pope Sixtus IV in 1478. Various things can be said about this. The first and obvious thing I could say as a Protestant is that this was overwhelmingly a Roman Catholic undertaking, and therefore something which of course I can therefore easily condemn.

But I will not rely on that. While it is true that these inquisitions were primarily the stuff of the Catholic church, Protestants over the centuries have of course not been free of such things. We too can have blood on our hands in this regard.

But here I want to offer a more general look at this, and offer some historical and sociological perspective. Historian Paul Johnson offer some of the political and social rationale for this:

The religious wars were based on the assumption that only a unitary society was tolerable, and that those who did not conform to the prevailing norms, and who could not be forced or terrified into doing so, should be treated as second-class citizens, expelled, or killed. Thus they reinforced or brought back to life destructive forces which already existed in medieval society. . . . In Spain, the Inquisition was part of the process whereby Castilians penetrated and unified the whole of Spanish society: it was set up in 1478 to examine the credentials of the converts.

Such historical background is important, and many have sought to offer this, but the many myths surrounding the Spanish Inquisition continue to swirl around heavily in modern thought and imagination. Careful historians have decried all the mythology and ahistorical silliness surrounding this topic.

In his very important scholarly work on the subject, The Spanish Inquisition: A Historical Revision, historian Henry Kamen writes: “From its very inception, the Inquisition in Spain provoked a war of words. Its opponents through the ages contributed to building up a powerful legend about its intentions and malign achievements. Their propaganda was so successful that even today it is difficult to separate fact from fiction.”

And fiction has certainly abounded. In his carefully researched volume, The Triumph of Christianity, historian Rodney Stark has a chapter on “The Shocking Truth About the Spanish Inquisition” in which the opening pages lay out a number of claims about this event. He then writes: “But the most shocking truth about the Spanish Inquisition is that everything above is either an outright lie or wild exaggeration!”

So let’s look briefly at some of these reckless and patently false claims. First, consider the numbers. A careful examination of the historical record reveals that at tops, around 2000 people were executed for heresy by the Inquisition. This is 2000 too many. But this works out to an average of less than 6 people a year during the 350 years. This is a far cry less than the many millions a year killed in the name of godless communism or ruthless fascism.

Stark offers some details here: “The fact is that during the entire period 1480 through 1700, only about ten deaths per year were meted out by the Inquisition all across Spain – and usually to repeat offenders.” He continues, “during the time in question there was no religious toleration anywhere in Europe and capital punishment was the norm for all offences, religious or otherwise. In context, then, the Spanish Inquisition was remarkably restrained.”

And as careful historians like Kamen have pointed out, the Inquisition trials were fairer and more lenient than their secular counterparts. Often the sentence was quite lenient, such as a period of fasting or some community work. He writes, “A comparison with the cruelty and mutilation common in secular tribunals shows the Inquisition in a relatively favourable light. This in conjunction with the usually good level of prison conditions makes it clear that the tribunal had little interest in cruelty and often attempted to temper justice with mercy.”

Or as Stark says about the issue of torture: “This may be the biggest lie of all! Every court in Europe used torture, but the Inquisition did so far less than other courts. For one thing, church law limited torture to one session lasting no more than fifteen minutes, and there could be no danger to life and limb. Nor could blood be shed!”

He cites historian Thomas Madden who “estimated that the inquisitors resorted to torture in only about 2 percent of all the cases that came before them”. Contrast this with the atheist hell holes of Stalin or Hitler or Castro or Mao, where torture and terror were routine and commonplace. Simply reading The Gulag Archipelago by Solzhenitsyn should offer a strong contrast here.

Stark continues: “So there it is. Contrary to the standard myth, the Inquisition made little use of the stake, seldom tortured anyone, and maintained unusually decent prisons.” And again, “The Inquisitors were far more concerned with repentance than with punishment.”

Or take the issue of witchcraft (which I have written about elsewhere – see link below). Says Stark in For the Glory of God, there were “comparatively few witchcraft trials in Spain. Even more striking is the fact that hardly any of these resulted in the death penalty. Except for several unusual instances when local, secular courts launched witch-hunts unsanctioned by the Inquisition, few of those accused were brought to trial, and almost all of those who were convicted received mild penalties.”

So how should Christians think about all this? In many respects this was a real perversion of biblical Christianity. No Biblical commands are found anywhere in the New Testament about the torture and killing of heretics. So yes, this was a blight on the Christian record.

But we should not throw the baby out with the bath water. Heresy is a vitally important issue, and must be dealt with. Of course how we deal with it is crucial. The truth is, truth matters – and it matters greatly. Therefore heresy matters as well. If heresy “ultimately ends up subverting, destabilizing, or even destroying the core of Christian faith” as Alister McGrath puts it in his book on this subject, then we must certainly deal with it with utmost seriousness.

As mentioned, killing heretics is not the New Testament answer to this problem. But at the very least, it can be said that Christendom back then took the issues of truth, orthodoxy and heresy seriously. Far too few believers today take such matters with the importance and earnestness which they deserve.

So while we can look back with disapproval, even condemnation, of so much that took place under the heading of inquisitions, we can at least try to offer some semblance of historical accuracy here. As usual, the critics have radically overstated their case, and it is imperative that some truth in advertising be offered here.

For those who want more on this, I encourage you to get hold of the volumes that I mention above, and do some serious study on your own. This is vital as we seek to engage in Christian apologetics with a world quite hostile to Christianity, as well as to truth.

9 Replies to “On the Spanish Inquisition”