A common tactic of critics of Christianity (be they atheists or Muslims or whoever) is to drag up various episodes from the past and claim that Christianity is just as bloody a religion as any other. So if you are pointing out the bloody history of political atheism, or Islam, they will think they can silence you by mentioning the crusades, and so on.

One of the areas they will mention are the witchcraft trials, especially in Salem at the end of the 1600s. They will say: “See, your religion is evil and violent and must be rejected as a result”. But as with all such objections, the charges being thrown around are often quite different from what we find in reality.

Thus a number of considerations need to be kept in mind as we discuss this issue. The critics really need to be challenged here, and not allowed to get away with reckless accusations, many of which just do not hold water. So let me deal with a few important considerations here. 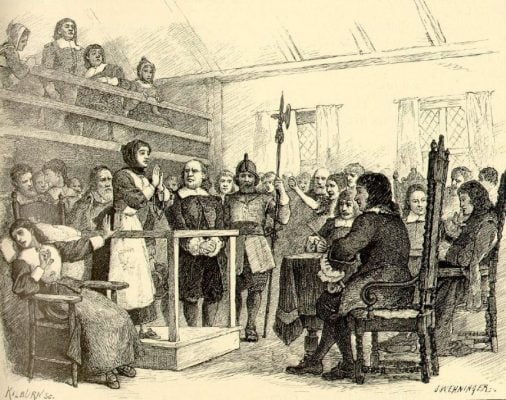 First, it must be said that much of this was not something biblical Christians can condone, and we simply have to say sorry for getting it wrong. Killing such people is not something commanded in the New Testament, and it was indeed a blemish on church history.

But some important provisos and qualifications need to be mentioned. In his important book, For the Glory of God, historian and sociologist of religion Rodney Stark offers this summary statement:

“Few topics have prompted so much nonsense and outright fabrication as the European witch-hunts. Some of the most famous episodes never took place, existing only in fraudulent accounts and forged documents, and even the current ‘scholarly’ literature abounds in absurd death tolls.”

The numbers mentioned have been all over the place. Various critics claim that the church killed millions of people as witches over the centuries. Some even claim ten million were killed. But some of the most recent estimates put the number of people killed for witchcraft at about 150 to 300 per year throughout all of Europe and North America, three quarters of whom were women.

Over a period of about 300 years, this comes to 40-100,000 people. Jeffrey Burton Russell is one authority on all this. Along with Brooks Alexander he wrote A History of Witchcraft: Sorcerers, Heretics, and Pagans. In his more popular volume Exposing Myths about Christianity he says this:

“The facts, as established by serious historians, show that the total number of alleged witches executed over two and a half centuries was about sixty thousand. About a third were men. Few of the executions were ordered by inquisitions; most were ordered by local authorities, and many of them were mob lynchings.”

Of course some 60,000 killed is still a lot of people. But it is nothing like the usual figures thrown around of many millions. And compare this with the deaths committed in the name of atheism. Soviet, Chinese and Eastern European communism is estimated to have killed 100 million people in the twentieth century.

Hitler’s campaign saw the death of 6 million Jews in a decade. Pol Pot of Cambodia killed around 3 million people in a year or two. And one can also contrast this with other societies which were indeed barbaric and bloodthirsty. The pre-Columbian Aztecs sacrificed about 15,000 people each year (out of a much smaller population base than Europe).

Moreover, it was often the case that lay people were leading the charge here. Church leaders were far from being usually involved in leading such activities. As historian Hugh Trevor-Roper said in The European Witch-Craze of the Sixteenth and Seventeenth Centuries, “in general the established church was opposed to the persecution [of witches]”

Or as Jonathan Burke puts it:

Historical facts demonstrate that the witch hunts were uncharacteristic of Christianity as a whole, though a belief in witches and witchcraft was common. The infamous ‘witch burning era’ is in fact confined to just 250 years of Christian history, and whilst large scale panics took place in many countries, it was rare for local church authorities to organize and initiate actual hunts.
The overwhelming majority of witch hunts and accusations were initiated by the common people, many of whom retained pagan superstitions which local Christian teachers often did little or nothing to correct (and sometimes encouraged). But the Christian attitude and response to witchcraft was by no means uniform across Europe, and church authorities in different countries (sometimes even in different regions), treated the issue in a variety of ways.

Similar things can be said about the Salem witch trials. There just were not that many of them. And many of the Christian leaders – Puritans included – were opposed to them. It was often ministers who opposed the trials. Cotton Mather for example went so far as to say it was “better that ten suspected witches should escape, than that one innocent person should be condemned”.

Also, while religious leaders believed in witches, so did everyone else of the day. As David Marshall writes in The Truth Behind the New Atheism, even “atheists and skeptics, such as Thomas Hobbes and Jean Bodin advocated the killing of witches, the latter of whom wanted it done in the slowest possible fire.”

And if the death penalty for this activity seems severe, a bit of historical context is needed. As Stark comments, “keep in mind that capital punishment was the usual penalty for all significant offenses – even at the height of the witch-hunts, many times more thieves and robbers than ‘witches’ were being executed.”

It can also be pointed out that Christians still believe that there really are such things as witches. Putting them to death today may not be the answer of course, but it was not a case of superstition and myth. Witches do exist, and can do real evil. Even today we read about Satanic cults and covens operating in the Dandenongs in Melbourne, for example, with reports of ritual abuse and murder. As Philip Sampson writes in Six Modern Myths:

Most people of the world throughout most of its history have taken supernatural witchcraft to be real. This does not necessarily mean that they have been gullible and superstitious. The Inquisitors of the sixteenth century believed that supernatural witches existed, but they were also well aware that some of those accused of witchcraft were simply ill or confused. Many people today believe that witches exist….

Indeed, with the New Age Movement in full swing in the West, and a widespread return to various alternative spiritualities including Neopaganism and the occult, witchcraft is back with a vengeance. Consider the sobering 2004 volume by Brooks Alexander called Witchcraft Goes Mainstream.

Discussing the media explosion about witchcraft in the 1990s, he says this:

In short order, Witchcraft was transformed into a pop-culture phenomenon, and “Wicca” became a teenage fad that didn’t fade, but turned into an enduring trend.
Those developments swelled the ranks of Neopaganism far beyond its own “structure” (such as it was), which was based on the various self-proclaimed Witchcraft groups and other organizations making up the active core of the movement. Suddenly, all of that was overshadowed by happenings in the popular media. Suddenly, there were tens of thousands of (mostly young) people running around calling themselves “witches,” and taking their ideas about what that means, not from a tradition, or a teacher of tradition, but from the internet, or a movie, or a TV show. The movement had become a mass movement almost overnight, and it was quickly growing beyond anyone’s ability to control, or direct, or even to measure.

So there are still plenty of people today heavily into witchcraft. Christians certainly believe in the reality of the supernatural. And they believe that there are good and evil spirits, angels and demons, and so on. Therefore real spiritual discernment is imperative, even in the postmodern West today.

How we deal with such matters is a matter of much thought and prayer. Obviously not everything found in the Old Testament carries over into the New. The civil laws given to Israel cannot be holus bolus dragged into modern times, even though the general moral principles behind them remain.

While a passage in the Old Testament like Exodus 22:18 can be cited (‘You shall not permit a witch to live’), such a command for the death penalty for witchcraft is not found in the New Testament. So those who claimed to be Christians doing this were acting against their own faith, and not in line with it.

Thus when Christians did such things back then, they were in the main wrong to do so. Christians today acknowledge that much of this was incorrect and improper. But allowing the atheists and other critics to radically distort the reality of what actually occurred and why is not something we should just accept.

For more on this, a lengthy and detailed set of online articles looking at this topic fairly thoroughly can be found here: bibleapologetics.wordpress.com/christianity-and-the-witch-hunt-era-17/

10 Replies to “On the Witchcraft Trials”