Which is worse: Muslims who take their faith seriously, or Western media dunces who keep making excuses for their devout faith? Every day we hear about more terror attacks committed by Muslims acting in the name of their Islamic faith, and every day we find clueless wonders in the West trying to make excuses for their actions. 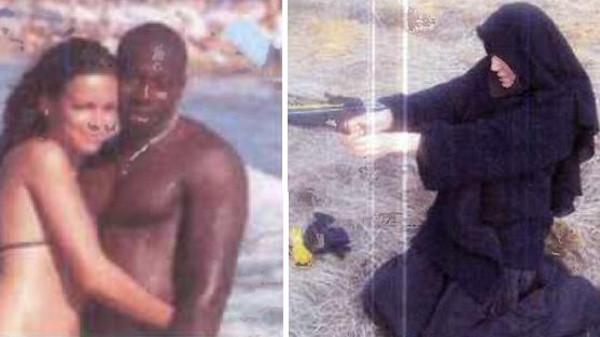 Whether wilfully or out of sheer ignorance, the Western media just refuses to get it. They keep shrilling for Islam, keep making excuses for the terrorists, and keep pretending that Muslims are somehow the victims in all this. Consider this header in the online version of today’s Herald Sun:

WANTED: The young women who sign up to life of terror
WHY would this young girl go from a bikini snapshot with her boyfriend to a niqab and crossbow? It’s the question many Islamic parents are asking – how did my child turn into a terrorist?

The article is of course discussing Hayat Boumeddiene, the Paris jihadist who is now on the run, probably in Syria. She is the one who seems to have supplied the weapons used to kill 17 people the other week, and was the girlfriend of one of the killed terrorists, Amedy Coulibaly.

One simply has to read the core Islamic religious documents to answer these sorts of questions. I grabbed my three copies of the Koran and started going through the texts which explain these things. What I offer here are just some of the texts found in the Koran which might have something to do with encouraging people like Hayat to do what she did:

‘Slay the unbelievers wherever you find them.’ 2:191
‘Let not believers take the infidels as friends.’ 3:28
‘Any religion other than Islam is not acceptable.’ 3:85
‘Maim and crucify the infidels if they criticize Islam.’ 5:33
‘Believers, do not take Jews and Christians as your friends.’ 5:51
‘I will instil terror into the hearts of the unbelievers: strike off their heads and strike all their finger-tips off.’ 8:12
‘Muslims must muster all weapons to terrorize the infidels.’ 8:60
‘The unbelievers are stupid; urge the Muslims to fight them.’ 8:65
‘When opportunity arises, kill the infidels wherever you find them.’ 9:5
‘Make war on the infidel.’ 9:14
‘The infidels are unclean; do not let them into a mosque.’ 9:28
‘The Jews and the Christians are perverse infidels; fight them.’ 9:29-30
‘Believers, make war on the infidels living in your midst.’ 9:123
‘Punish the unbelievers with garments of fire, hooked iron rods, boiling water; melt their skin and bellies.’ 22:19
‘Do not make peace with the infidels; behead them when you catch them.’ 47:4

These are only some of the Koranic injunctions to violence, bloodshed and terror. And I have not offered anything from the hadith or the sira. If Muslims go around killing and terrorising in the name of Allah, they have plenty of warrant to do so from their own holy texts.

Now just imagine for a moment if the Christian New Testament contained these sorts of commands to kill and attack non-believers. And imagine if Christians were involved in 25,000 Christian terror attacks since 9/11 alone. Do you really think the mainstream media would write articles like this, asking why a Christian bikini babe would turn into a murderous Christian terrorist?

Umm, I don’t think so. Even the mentally challenged folks in the MSM would very easily be able to connect the dots: the holy book of Christians is saturated with orders to attack and kill non-Christians; Christianity has been doing so for 2000 years now; thus we are not surprised that a young Christian girl goes off and gets involved in such horrific terrorism.

It all makes perfect sense. Yet when it comes to Muslims doing this exact thing, the num nums in the MSM scratch their heads and appear to be utterly dumbfounded as to why this might occur. The great majority of those in the MSM simply hate the West and hate Christianity, and are more than happy to bend over backwards in defence of Islam.

Dennis Prager recently wrote about this very thing, and is worth quoting here. He begins his article this way:

Since 9/11, the Western world’s academic, media, political elites have done their best to portray Islam in a favorable light, treating it very differently from all other religions. Criticism of every doctrine, religious or secular, is permitted, often encouraged. But not of Islam. Only positive depictions are allowed.
We’ll start with an example of pro-Islamic bias that is so ubiquitous that no one seems to notice it. Why do Western media – overwhelmingly composed of irreligious people, one might add – always deferentially refer to Muhammad as “the Prophet Muhammad” in news articles and opinion pieces?
When Jesus is mentioned, the media never refer to him as “Christ, the Lord” or as “the Lord and Savior Jesus Christ.” Just “Jesus.” In fact, “A.D.” (“anno Domini” – “year of our Lord”) has been completely dropped by the very academics and media who always write “The Prophet Muhammad.”
When the media discuss Joseph Smith, the founding prophet of the Church of Jesus Christ of Latter Day Saints (the Mormon Church), they don’t refer to him as “the Prophet Joseph Smith.” Why not? Is there a single difference between his title and roles in Mormonism and Muhammad’s in Islam? And Jews refer to Moses as “Moshe Rabbeinu,” Moses our Teacher. Why don’t the media?
This was not the case in the past. When I studied Islam and Arabic in college, professors referred to the founder of Islam as “Muhammad.” And virtually none of the great biographies of Muhammad – even among those recommended on Muslim websites – have the words “the Prophet Muhammad” in their title. There is only one possible reason and that is Political Correctness – Western elites bending over backwards on behalf of Muslims and Islam in ways they never would for another religion.
Another ubiquitous example: Before 9/11, the phrase “Allahu Akbar” was translated as “Allah is great” [or “the greatest”). Since 9/11, it has been translated as “God is great.” This was deliberate.

Yep, let’s all just give Islam the full tick of approval, while being suspicious of and hostile to anything and everything Christian. Makes perfect sense. The MSM will make every excuse in the world for bloodthirsty Muslim terrorists, while condemning the slightest actions of Christians.

Such is the world that we now live in – at least in the West. No wonder we are losing. No wonder Islam is on the ascendency. No wonder we keep experiencing jihad on our streets. And it will only continue to get worse until we finally wake up to the real nature of Islam. But I won’t be holding my breath on that happening any time soon.

26 Replies to “It Is Time To Get Real: Islam Begets Terrorism”