On Sunday the demonic and devout Muslims of Islamic State beheaded 21 Egyptian Coptic Christians in Libya. For simply being a follower of Jesus Christ you will be killed by the religion of peace. It is not unexpected however. In Revelation 20:4 we read this: “And I saw thrones, and they sat on them, and judgment was committed to them. And I saw the souls of those who had been beheaded for their witness to Jesus and for the word of God.”

And we should not be surprised at this either if we know anything about the real nature of Islam. Some 270 million people have been slaughtered by devout Muslims over its 1400 year history. Every day we read about more atrocities committed by this demonic political ideology.

Since 9/11 alone, there have been 25,129 deadly Islamic terror attacks. Not a day goes by when somewhere in the world people are being horrifically killed in the name of Allah and his ‘prophet’ Muhammad. Not even godless communism killed as many people (although they had only been around for a fraction of the time).

Just imagine if this were the regular routine of Christians: killing every day and being proud of it. Christianity would have been outlawed long ago at least in the West. But because it is Islam, we sleep through it all, and Barack Hussein Obama happily keeps playing golf.

Rev. Franklin Graham said this on his Facebook page about the massacre:

The militant Islamic terrorist group ISIS has released a video called A MESSAGE SIGNED WITH BLOOD TO THE NATION OF THE CROSS showing the beheadings of 21 Egyptian Christians who had been kidnapped in Libya. Can you imagine the outcry if 21 Muslims had been beheaded by Christians? Where is the universal condemnation by Muslim leaders around the world? As we mourn with the families of those 21 martyrs, we’d better take this warning seriously as these acts of terror will only spread throughout Europe and the United States. If this concerns you like it does me, share this. The storm is coming.

Here are the names of these brave Christians who are no longer walking this earth: 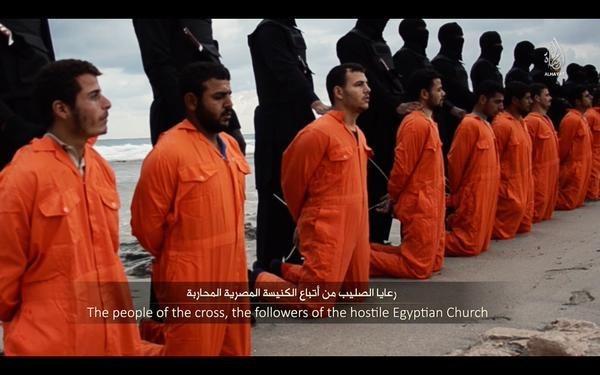 Please keep their families and loved ones in prayer. They so much need your prayers as they go through such horrific agony right now. But with all due respect, how many Christians even know about this, let alone care about it? How many believers just don’t give a rip about any of this?

How many Christians are instead on about getting their ‘best life now’? How many just want to get more money, buy more stuff, and keep living the good life? Shame on them. They party while their brothers and sisters around the world are being killed and tortured and imprisoned in the millions.

Western Christians need to repent of their appalling apathy, indifference and carelessness. Indeed, they seem to perfectly fit in with what Jesus said about such believers in Revelation 3:16: “So, because you are lukewarm – neither hot nor cold – I am about to spit you out of my mouth.”

There are just so many reasons why the Lord Jesus Christ would want to vomit up these useless believers. Their utter lack of concern for their suffering brothers and sisters around the world is just one such reason. Incredibly we get far more concern out of non-Christians such as Andrew Bolt on all this.

He seems to care much more about the Islamic killing of Christians than most Christians do: “Islamic State murderers are busy right now killing lots of Muslims they believe are not sufficiently devout. But they do have time to remind Christians that their turn will come: ‘ISLAMIC State has released a graphic video showing 21 Egyptian Christians being beheaded in Libya as a “message signed with blood to the nations of the cross”‘.”

When are we going to repent of our damnable life of luxury, entertainment, partying and apathy? When are we going to give up our trivial pursuits and our lousy lavish lifestyles, and start caring for once in our lives about something that really matters?

When are we going to get on our faces before Almighty God and cry out in repentance, pleading for his mercy. We live like kings while our Christian neighbours are horribly treated and killed. And we don’t care at all. We are indifferent to their suffering, and we just want more of the good life.

The verse following from the one I offered above about the Laodicean church applies perfectly well to us today: “You say, ‘I am rich; I have acquired wealth and do not need a thing.’ But you do not realize that you are wretched, pitiful, poor, blind and naked.”

There is only one remedy for that: repentance.

17 Replies to “Remember These Names”