David Chilton titled his 2006 commentary on the book of Revelation The Days of Vengeance. That is a pretty accurate description of so much of what we find in this book. Before I go on to look at this in more detail, let me explain why I am raising this here.

I just wrote an article on the horrific killing of 21 Egyptians Coptic Christians by IS in Libya: billmuehlenberg.com/2015/02/17/remember-these-names/

Every Christian on the planet should be greatly concerned, not just about these brave martyrs, but the countless Christians slain in recent times by devout Muslims. More Christians have died for their faith in the past century than in the rest of the church’s 2000 year history.

While much of this came at the hands of godless Communists last century, a great proportion of it comes in the name of the political ideology known as Islam. But whoever is doing the killing, the truth is, there is a place for some righteous indignation here. We should be greatly bothered by the death of our brothers and sisters.

While personal vengeance and hatred is not our calling (although there is a place for self-defence as I argue here: billmuehlenberg.com/2012/12/20/self-defence-and-scripture/ ), we at least can pray that God will vindicate his people. We can rightfully ask God to stand against our enemies. We can rightly pray that he deals with those who attack us.

Now I realise that squeamish Christians, evangellyfish, and spineless church mice will shudder at even the thought of all this, but forget about them. What we need is to hear from the Lord Almighty himself on this. And the truth is, we have hundreds of passages of scripture from both Testaments which speak about God’s enemies (who are often our own enemies), and the plea for God to intervene and deal with them.

When horrific and demonic things like the beheading of the 21 Christians take place, there is nothing amiss in crying out to God that he will vindicate these people, and mete out justice on the wicked. And the book of Revelation is all about this.

Indeed, it even speaks to two other aspects of this recent jihad attack. One, it speaks to beheading (Rev. 20:4): “And I saw thrones, and they sat on them, and judgment was committed to them. And I saw the souls of those who had been beheaded for their witness to Jesus and for the word of God.” 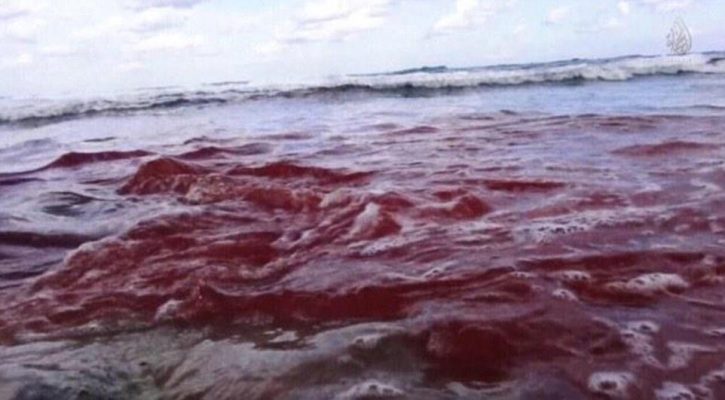 And two, it even discusses things like the oceans turning red with blood:
-Rev. 16:3 The second angel poured out his bowl on the sea, and it turned into blood like that of a dead person, and every living thing in the sea died.
-Rev. 8:8-9 The second angel sounded his trumpet, and something like a huge mountain, all ablaze, was thrown into the sea. A third of the sea turned into blood, a third of the living creatures in the sea died, and a third of the ships were destroyed.

This in fact was the case in Libya. The surrounding sea turned red with all the blood of the martyrs. I am not saying the two Revelation passages are referring to this, but just pointing out that we have some generic verses which can be brought in here.

One very simple way to describe much of the contents of the book of Revelation is to say it is comprised of two alternating and repeating themes: announcements of judgment and the wrath of God being poured out on the unrepentant and rebellious, followed by various beings breaking into song, praise and worship because of these very judgments. For example:

Rev. 6:9-11: When he opened the fifth seal, I saw under the altar the souls of those who had been slain because of the word of God and the testimony they had maintained. They called out in a loud voice, “How long, Sovereign Lord, holy and true, until you judge the inhabitants of the earth and avenge our blood?” Then each of them was given a white robe, and they were told to wait a little longer, until the full number of their fellow servants, their brothers and sisters, were killed just as they had been.

Rev. 11:16-18: And the twenty-four elders, who were seated on their thrones before God, fell on their faces and worshiped God, saying:
“We give thanks to you, Lord God Almighty,
the One who is and who was,
because you have taken your great power
and have begun to reign.
The nations were angry,
and your wrath has come.
The time has come for judging the dead,
and for rewarding your servants the prophets
and your people who revere your name,
both great and small—
and for destroying those who destroy the earth.”

Rev. 12:10-12: Then I heard a loud voice in heaven say:
“Now have come the salvation and the power
and the kingdom of our God,
and the authority of his Messiah.
For the accuser of our brothers and sisters,
who accuses them before our God day and night,
has been hurled down.
They triumphed over him
by the blood of the Lamb
and by the word of their testimony;
they did not love their lives so much
as to shrink from death.
Therefore rejoice, you heavens
and you who dwell in them!
But woe to the earth and the sea,
because the devil has gone down to you!
He is filled with fury,
because he knows that his time is short.”

Rev. 15:1-4: I saw in heaven another great and marvelous sign: seven angels with the seven last plagues – last, because with them God’s wrath is completed. And I saw what looked like a sea of glass glowing with fire and, standing beside the sea, those who had been victorious over the beast and its image and over the number of its name. They held harps given them by God and sang the song of God’s servant Moses and of the Lamb:
“Great and marvelous are your deeds,
Lord God Almighty.
Just and true are your ways,
King of the nations. Who will not fear you, Lord,
and bring glory to your name?
For you alone are holy.
All nations will come
and worship before you,
for your righteous acts have been revealed.”

Rev. 16:1-7: Then I heard a loud voice from the temple saying to the seven angels, “Go, pour out the seven bowls of God’s wrath on the earth.”
The first angel went and poured out his bowl on the land, and ugly, festering sores broke out on the people who had the mark of the beast and worshiped its image.
The second angel poured out his bowl on the sea, and it turned into blood like that of a dead person, and every living thing in the sea died.
The third angel poured out his bowl on the rivers and springs of water, and they became blood. Then I heard the angel in charge of the waters say:
“You are just in these judgments, O Holy One,
you who are and who were;
for they have shed the blood of your holy people and your prophets,
and you have given them blood to drink as they deserve.”
And I heard the altar respond:
“Yes, Lord God Almighty,
true and just are your judgments.”

Rev. 18:17-20: “Every sea captain, and all who travel by ship, the sailors, and all who earn their living from the sea, will stand far off. When they see the smoke of her burning, they will exclaim, ‘Was there ever a city like this great city?’ They will throw dust on their heads, and with weeping and mourning cry out:
“‘Woe! Woe to you, great city,
where all who had ships on the sea
became rich through her wealth!
In one hour she has been brought to ruin!’
“Rejoice over her, you heavens!
Rejoice, you people of God!
Rejoice, apostles and prophets!
For God has judged her
with the judgment she imposed on you.”

After this I heard what sounded like the roar of a great multitude in heaven shouting:
“Hallelujah!
Salvation and glory and power belong to our God,
for true and just are his judgments.
He has condemned the great prostitute
who corrupted the earth by her adulteries.
He has avenged on her the blood of his servants.”
And again they shouted:
“Hallelujah!
The smoke from her goes up for ever and ever.”
The twenty-four elders and the four living creatures fell down and worshiped God, who was seated on the throne. And they cried:
“Amen, Hallelujah!”
Then a voice came from the throne, saying:
“Praise our God,
all you his servants,
you who fear him,
both great and small!”
Then I heard what sounded like a great multitude, like the roar of rushing waters and like loud peals of thunder, shouting:
“Hallelujah!
For our Lord God Almighty reigns.
Let us rejoice and be glad
and give him glory!
For the wedding of the Lamb has come,
and his bride has made herself ready.
Fine linen, bright and clean,
was given her to wear.”

This book is one big praise and worship session wherein God’s people and the angelic host give thanks to God and break forth into joyous song over God’s just punishment of the wicked. They celebrate the vengeance of God in other words.

There is nothing at all wrong in joining in with such celebrations. Sure, Christians are not called to personally seek vengeance, but are to leave it to the institution of the state which God ordained for this very purpose: to punish wrongdoing and administer justice.

And sometimes God bypasses the state and directly does the judging himself, as we find big time in the book of Revelation. So we must pray for the families and loved ones of those killed. We can even pray for these IS barbarians, that they come to Christ and repent of their evil.

But we can also pray that God will come and vindicate those who have suffered so greatly for their faith.