The devout Islamic group IS is on a roll, and there is good reason for this: much of the West is either asleep, or is at least indirectly siding with IS. We have so many complete stooges in high office, such as Obama, that we are seeing this band of demonic militants moving from strength to strength.

Obama and other leaders have been defending Islam for years now, while denigrating Christianity. These leaders refuse to even identify the enemy. That is not a good move: when people have sworn to kill you, you really better stand up and take notice.

One idiotic thing after another is being said by these dhimmi leaders and their clueless wonders in the lamestream media. We had the perfect example of this just yesterday. One can only describe this as taking first prize in the “Num Num of the Decade” award. 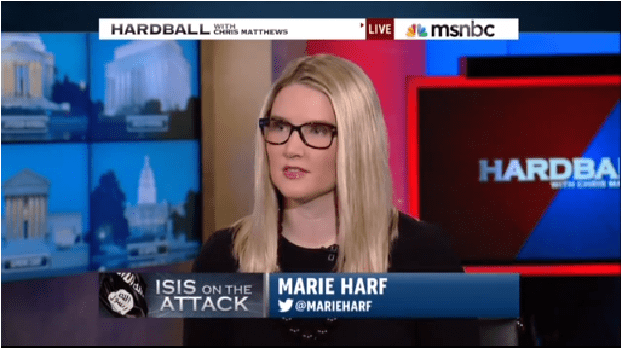 Of course I realise there are many other worthy contenders for this award, but this one certainly has to take the cake. I refer of course to US State Department Deputy Spokesperson Marie Harf. What she said on MSNBCS’s “Hardball” has got to be one of the most idiotic and deplorable remarks you will hear from the Obama administration.

This is what she said: “We cannot win this war by killing them [ISIS], we cannot kill our way out of this war. We need in the longer term, medium to longer term, to go after the root causes that lead people to join these groups, whether it is lack of opportunities for jobs…” You can see her actually saying this in the link below.

Warning: Sarcasm Alert. If sarcasm gives you the heebie-jeebies, then please look away now. Start of sarcasm.

Oh, OK, I see. When you are without a job for a while, it is natural that you will want to go around and chop off the heads of Jews, Christians and other infidels. OK, gotcha. Makes perfect sense to me. There is no religious ideology behind any of this. There is no track record of 1400 years of such activity.

Just a bunch of concerned unemployed people who are worried about their job prospects. Yes, it is all making good sense to me. Why didn’t I see this before? Unemployment jihad! Of course! This has nothing to do with Islam, with Muhammad and his example, with Koranic commands and plenty of backup in the hadith and sira.

It is just about unemployment! Thank you Obama White House for enlightening us all on this issue. So good to get the right picture here. Now we can all just relax and go about our normal business. Phew, what a relief!

But I wonder if the critics might offer a few objections. They are likely really off base here, but I do want to be fair, and allow a few of these obvious Obama-haters and racists to offer their two-cents worth. They might say that lots of people have been unemployed, but never beheaded anyone as a result.

Hmm, good point: maybe they are on to something here. Indeed, there are millions of Christians and Jews who have known various periods of unemployment who have not beheaded anyone. They have not killed anyone, joined terrorist groups, or sworn to destroy everyone else.

Now that I think of it, I have been unemployed. And you know, I don’t think it ever once crossed my mind to behead other people. That just did not occur to me. Hmmm, maybe the critics of Obama might be on the right track here. Just maybe…

What Harf said is of course the standard Obama line on all this: Islam is a religion of peace. Any time a Muslim kills an infidel in the name of Allah, it has absolutely nothing to do with Islam. And it is likely the fault of Christians anyway. So the Harf baloney is simply part of the Obama appeasement package.

Of course for Obama appeasement means in effect seeing sharia law entrenched in America and the world, and getting all Christian influence greatly curtailed. For Obama, Islam must be defended at all costs, while Christianity must be constantly attacked.

This is how he thinks and how he operates. So I guess we cannot just single out Harf here. She is just doing her master’s bidding. The entire Obama team is basically corrupt. He and his cronies really should be tried for treason. They have done more to destroy America, weaken the West, and embolden Islam than any other POTUS ever has.