The last half of James 2:13 says this: “Mercy triumphs over judgment”. This passage is not so much a difficult passage as it is one which is regularly misused and abused. It is often hauled out to say something which it never intended to say.

Primarily, many Christians drag up this text when discussions of public justice are being mooted. They will argue that the state must always show mercy, because this is the “Christian” thing to do. But is this the case? Is this how we are to understand this passage?

I think not. The short answer is that James is discussing personal ethics here: how an individual Christ follower should respond in various situations. The context (2:1-2) is about the rich and poor, and how we should show favouritism. Yes we should be merciful, we should be forgiving, and we should not be partial to the wealthy. But what James is not discussing here is the issue of social ethics, or the nature and character of God.

The words of Jesus as found in Matthew 5:7 may well be in view here for James. He said: “Blessed are the merciful, for they will be shown mercy.” Yes, in terms of our interpersonal relationships, we should exhibit mercy as much as possible.

But this has nothing to do with how the state should operate. And this should not wrongly be used to suggest that mercy is more important to God than justice. God is of course a God of mercy, but he is also a God of justice. Both are attributes of God, and we are never to try to elevate one over the other.

And he passed in front of Moses, proclaiming, “The Lord, the Lord, the compassionate and gracious God, slow to anger, abounding in love and faithfulness, maintaining love to thousands, and forgiving wickedness, rebellion and sin. Yet he does not leave the guilty unpunished; he punishes the children and their children for the sin of the parents to the third and fourth generation.” 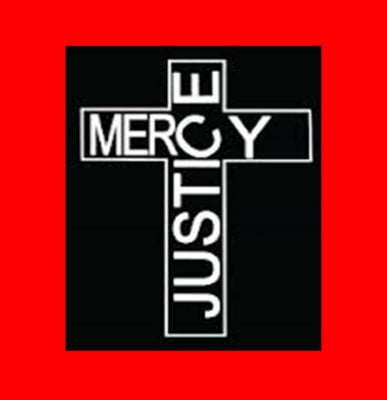 We find this expressed in many other places. Let me offer just one more passage. Psalm 119:156 (RSV) say this: “Great is thy mercy, O Lord; give me life according to thy justice.”

And we see the perfect union of these two attributes and qualities at the cross. Calvary is of course the supreme act of mercy, whereby Jesus dies a horrible death so that lost sinners can get reconciled to God through faith and repentance. God’s mercy and grace are fully exhibited at the cross. But so too is God’s holiness and justice.

As J. Budziszewski rightly explains, “The reconciliation of justice with mercy lies in the Cross. God does not balance mercy and justice; He accomplishes both to the full.” And D. A. Carson has put it this way:

Or as John Stott expresses it in his commentary on this passage: “In the cross of Christ justice was fully done, its claims were fully met and God’s mercy to sinners triumphed in the provision of a complete forgiveness and a full salvation. . . . Judgment looks at our deserts; mercy at our needs. And God himself looks at the cross of his Son.”

Much confused thinking arises in this regard when it comes to something like the death penalty. Many people foolishly push the view that a Christian must oppose capital punishment because “mercy triumphs over justice”. Indeed, they even wrongly claim that Christians must oppose all killing.

This is of course patently false. No biblical Christian is against all killing, for the simple reason that God is not opposed to all killing. Indeed, he has ordained certain forms of morally licit killing, such as just warfare, self-defence, and capital punishment. But I explain this in more detail here:
billmuehlenberg.com/2006/09/11/is-it-ever-right-to-kill/

Sadly, and incredibly, plenty of Christians seem unable or unwilling to make even the most basic and elementary of distinctions – distinctions which not only the Bible makes, but every court of law makes on a regular basis. I refer to the massive difference between killing and murder.

Very simply put, killing the innocent is murder; the just killing of the guilty is not murder. Why any Christian cannot grasp this fundamental principle is beyond me. So when some Christians speak of the “seamless garment” argument, that every single type of killing is wrong, they are quite amiss.

As one critic put it elsewhere, “I’m against contraception, abortion, euthanasia and executions”. Um no. The first three have to do with murder, the last with justified killing. Yes, intentionally killing the innocent is always wrong, but killing the guilty is not wrong, when done in accordance with God’s provisions as outlined in Scripture and as has been carefully elaborated upon in three millennia of philosophical and moral reflection.

BTW, since the “seamless garment” or so-called “consistent ethic of life” position is mainly – but not exclusively – argued for by certain Catholics, let me point out that there are plenty of Catholics who do not buy it. Here are just two of them:
www.crisismagazine.com/1988/a-cardinal-error-does-the-seamless-garment-make-sense
coalitionforthomism.blogspot.com.au/2010/08/corrupt-theology-of-seamless-garment.html

And these folks claim that it is unjust to kill someone with capital punishment, as it takes away a person’s chance to repent. The person mentioned above went on to say that capital punishment “may well abort the process of repentance, which could hardly happen naturally in a state of fear and anxiety about being put to death.”

But by this rather unhelpful reasoning, we would have to charge God with a lack of mercy and fairness, since he does not allow everyone to live to be at least 500 years old. After all, if we want people to repent, then the longer they live, the more chances they will have for repentance.

Moreover, Scripture clearly tells us that our times are in God’s hands. He has appointed when we will live and when we will die. As we read in Job 14:5, “A person’s days are determined; you have decreed the number of his months and have set limits he cannot exceed.” Or as it says in Psalm 139:16: “all the days ordained for me were written in your book before one of them came to be.” And in Ecclesiastes 3:1-2 we read, “There is a time for everything, and a season for every activity under the heavens: a time to be born and a time to die.”

And of course it is exactly when people know they are about to meet their maker that they get the most clarity, and much repentance in fact takes place during this time. So the critics of capital punishment tend to get it wrong on their various objections. But for more on this, see here:
www.billmuehlenberg.com/2007/10/11/on-capital-punishment-part-1/
www.billmuehlenberg.com/2007/10/12/on-capital-punishment-part-2/

Let me finish with a few quotes on mercy and justice, especially in relation to the death penalty. As Adam Smith pithily put it, “Mercy to the guilty is cruelty to the innocent.” J. Budziszewski once rightly said:

Christ did teach personal forgiveness, but he never challenged the need for public justice. The supposition that personal forgiveness implies a requirement for universal amnesty is not merely weak but mistaken. Taken seriously, it would destroy all public authority, for if punishment as such is incompatible with forgiveness, then why stop with capital punishment? Must we not abolish prisons, fines, and even reprimands as well?

And Norman Geisler was quite correct when he wrote:

If a Christian jumps off a high cliff, confessing his sins on the way down will not avert death at the bottom. The truth is that, forgiven or not, there are social and physical consequences of sin. A Christian who commits a capital crime can receive forgiveness but should not expect to avoid the appropriate penalty. And the fitting penalty for taking another life is giving one’s own.

Individual believers then should seek to extend mercy, just as they have received mercy from God. But arguing that the God-ordained institution of the state should ignore justice for mercy is simply untenable, biblically speaking, as is the claim that God himself in his fundamental character is more merciful than he is just.