As I have written hundreds of times now, battles are raging all around us. Anyone who loves Jesus and who is concerned about faith, family and freedom should realise that all we hold near and dear is under incessant and fierce attack.

That is because there is a devil who opposes God and everything about him, and he has his willing workers on earth, just as God has his workers and foot soldiers. We are in a real war, in other words, which commences in the heavenlies but is being fought on every other level: the political, the social, the cultural, the legal, the ideological, the philosophical, and so on.

Yet so many believers are either ignorant about all this or apathetic. And if you ask them about this, they just say “I don’t know and I don’t care”. Much of the church is simply missing in action. They have little awareness of the massively important battles going on all around them, or they refuse to get involved.

Their lack of willingness to be informed and to engage in these fights is an indication of their own apathy, lukewarmness and worldliness. And even worse yet, many of these so-called believers actually side with those warring against us.

How often have I had Christians side with the homosexual lobby, or the abortionists, or with Islam, or with the sleaze merchants, or the false prophets, etc? And that in fact tends to be what happens here: there can be no neutrality in these wars.

As Jesus said, you are either for me or against me. If believers refuse to stand with Christ and his cause, they invariably end up standing against him. Those who think they can just sit out all these battles are kidding themselves, and are effectively siding with the enemy.

And one indication of this is how these carnal and compromised Christians will time and time again end up attacking those Christians who are engaged, who are seeking to make a difference, who are fully committed to stand for Christ in a hostile world.

I of course get this all the time. I expect the criticisms, abuse and hate of those opposed to Christ and the gospel. But what I will never get used to is the constant, steady and often vociferous attacks from others calling themselves Christians. 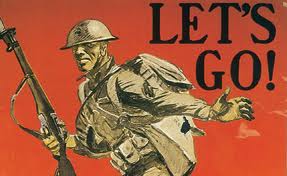 What really takes the cake is the fact that more often than not these folks are armchair critics. That is, they are more than happy to take pot shots at you, to attack you, to criticise you, and judge you, although they have done little if anything for the cause of Christ. They sit in their easy chairs and never publicly stand for Christ or wade into the important controversial issues of the day, but are happy to blast those who do.

Well, we need to ignore these useless and hypocritical critics. They are a dime a dozen and we already know what God thinks about them. What, you mean the Bible actually speaks to this? Yep, it sure does. I just reread a terrific verse on this in my daily reading. (This is just one reason why you must read the Word every day, and try to go through the whole Bible at least once a year.)

The verse I just read is Numbers 32:6-7 which says: “Moses said to the Gadites and Reubenites, ‘Should your fellow Israelites go to war while you sit here? Why do you discourage the Israelites from crossing over into the land the LORD has given them?'”

Moses goes on to remind them of how greatly he and Yahweh were grieved by the cowardly reaction of their fathers when they refused to believe that Canaan could be taken, as recorded in Numbers 13-14. Here Moses underscores the importance of all this in verse 23: “But if you fail to do this, you will be sinning against the LORD; and you may be sure that your sin will find you out.”

Here we have the same situation that many of us face today. There was work to be done, there was a war going on, but some of God’s people just wanted to sit this one out. No way! You either get involved in the action or you are just aiding and abetting the enemy. These sluggards thought that other Israelites could do all the fighting, and once Canaan was ready to be occupied, they could just enjoy all the benefits.

Sorry, it just does not work that way. If you want the goodies, you have to first engage and get your hands dirty. There is no crown without a cross, and there is no possession of what God has for us if we think we can just sit on our tails doing nothing, while others slug it out in the trenches.

And in so many of these battles, such as the fight to protect marriage and family, if we don’t all engage, we will all suffer. Even if only a handful of Christians are taking on the homosexual militants, it impacts every single one of us. If the other side wins, the whole church suffers.

So this idea that some can just kick back, put their feet up and relax, while criticising those who are standing boldly for Christ and his values are just kidding themselves. For their inaction, they will have to endure all that the other side is seeking to do in its ungodly agenda, and they will have to give an account to the Commander-in-Chief one day.

In the militaries on earth, those who desert or are missing in action or refuse to fight are rightly treated as dangerous traitors deserving of the severest penalties. It is no different in God’s army: he has saved us, equipped us and sent us off to battle. Those who refuse to do so are not only cowards, but are rebelling against the Lord.

And God will deal with them (see Revelation 21:8 for example). But we need to ignore these turncoats and keep on keeping on with the assignments the Lord has given us. As Joshua told the Israelites a bit later following this episode, “there remains very much land yet to be possessed” (Joshua 13:1 NKJV).

11 Replies to “We Must Engage – and Ignore the Critics”