Israeli Prime Minister Benjamin Netanyahu has just delivered his historical address to the US Congress. This has been amazing for all sorts of reasons, not least of which is all the opposition of Barack Obama. The fact that Netanyahu came in response to Speaker Boehner’s invitation had Obama throwing a hissy fit.

But more importantly, as one Italian journalist wrote, “The Obama Administrations fomented a war on Jerusalem and treated Israel like a banana republic. Obama now wants to force Israel to submissively offer its throat to Iran’s knife.” And even more incredibly, consider the reports saying that last year Obama authorised Israeli planes to be shot down if they targeted nuclear facilities in Iran.

As one commentator said, “Obama exceeds Chamberlain by switching allegiance from ally to enemy”. He wrote:

There is no comparison between supporting the survival of a nation and defending another nation’s violent intent. One is struggling for its very life, surrounded by enemies on virtually every side. The other is a theocratic foe to western countries, expending every resource on developing methods to destroy the West. In this scenario, why does the Leader of the Free World side with the menace rather than the underdog? We are watching the unraveling of order in the world as the Obama administration turns its back on a tried ally in favor of treating with a duplicitous regime bent on destroying the West.

We got a flavour of what Netanyahu wanted to say in his speech to the American Israel Public Affairs Committee the day before. There he said, in part:

Ladies and gentlemen, the purpose of my address to Congress tomorrow is to speak up about a potential deal with Iran that could threaten the survival of Israel. Iran is the foremost state sponsor of terrorism in the world. Look at that graph. Look at that map. And you see on the wall, it shows Iran training, arming, dispatching terrorists on five continents. Iran envelopes the entire world with its tentacles of terror. This is what Iran is doing now without nuclear weapons. Imagine what Iran would do with nuclear weapons.
And this same Iran vows to annihilate Israel. If it develops nuclear weapons, it would have the means to achieve that goal. We must not let that happen.
And as prime minister of Israel, I have a moral obligation to speak up in the face of these dangers while there’s still time to avert them. For 2000 years, my people, the Jewish people, were stateless, defenseless, voiceless. We were utterly powerless against our enemies who swore to destroy us. We suffered relentless persecution and horrific attacks. We could never speak on our own behalf, and we could not defend ourselves.
Well, no more, no more.
The days when the Jewish people are passive in the face of threats to annihilate us, those days are over. Today in our sovereign state of Israel, we defend ourselves. And being able to defend ourselves, we ally with others, most importantly, the United States of America, to defend our common civilization against common threats. 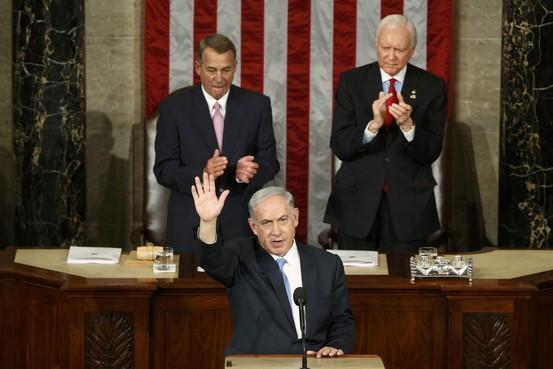 As to today’s talk, we had the appalling non-appearance of Obama, Biden and scores of other Democrats. Here is part of his 40-minute speech (interrupted by applause around 40 times) given today to the joint sitting of Congress:

My friends, I’ve come here today because, as prime minister of Israel, I feel a profound obligation to speak to you about an issue that could well threaten the survival of my country and the future of my people: Iran’s quest for nuclear weapons.
We’re an ancient people. In our nearly 4,000 years of history, many have tried repeatedly to destroy the Jewish people. Tomorrow night, on the Jewish holiday of Purim, we’ll read the Book of Esther. We’ll read of a powerful Persian viceroy named Haman, who plotted to destroy the Jewish people some 2,500 years ago. But a courageous Jewish woman, Queen Esther, exposed the plot and gave for the Jewish people the right to defend themselves against their enemies. The plot was foiled. Our people were saved.
Today the Jewish people face another attempt by yet another Persian potentate to destroy us. Iran’s Supreme Leader Ayatollah Khamenei spews the oldest hatred, the oldest hatred of anti-Semitism with the newest technology. He tweets that Israel must be annihilated – he tweets. You know, in Iran, there isn’t exactly free Internet. But he tweets in English that Israel must be destroyed.
For those who believe that Iran threatens the Jewish state, but not the Jewish people, listen to Hassan Nasrallah, the leader of Hezbollah, Iran’s chief terrorist proxy. He said: If all the Jews gather in Israel, it will save us the trouble of chasing them down around the world.
But Iran’s regime is not merely a Jewish problem, any more than the Nazi regime was merely a Jewish problem. The 6 million Jews murdered by the Nazis were but a fraction of the 60 million people killed in World War II. So, too, Iran’s regime poses a grave threat, not only to Israel, but also the peace of the entire world. To understand just how dangerous Iran would be with nuclear weapons, we must fully understand the nature of the regime.
The people of Iran are very talented people. They’re heirs to one of the world’s great civilizations. But in 1979, they were hijacked by religious zealots – religious zealots who imposed on them immediately a dark and brutal dictatorship….
Iran and ISIS are competing for the crown of militant Islam. One calls itself the Islamic Republic. The other calls itself the Islamic State. Both want to impose a militant Islamic empire first on the region and then on the entire world. They just disagree among themselves who will be the ruler of that empire.
In this deadly game of thrones, there’s no place for America or for Israel, no peace for Christians, Jews or Muslims who don’t share the Islamist medieval creed, no rights for women, no freedom for anyone.
So when it comes to Iran and ISIS, the enemy of your enemy is your enemy.
The difference is that ISIS is armed with butcher knives, captured weapons and YouTube, whereas Iran could soon be armed with intercontinental ballistic missiles and nuclear bombs. We must always remember – I’ll say it one more time – the greatest dangers facing our world is the marriage of militant Islam with nuclear weapons. To defeat ISIS and let Iran get nuclear weapons would be to win the battle, but lose the war. We can’t let that happen.
But that, my friends, is exactly what could happen, if the deal now being negotiated is accepted by Iran. That deal will not prevent Iran from developing nuclear weapons. It would all but guarantee that Iran gets those weapons, lots of them.

My friend, standing up to Iran is not easy. Standing up to dark and murderous regimes never is. With us today is Holocaust survivor and Nobel Prize winner Elie Wiesel. Elie, your life and work inspires to give meaning to the words, “never again.” And I wish I could promise you, Elie, that the lessons of history have been learned. I can only urge the leaders of the world not to repeat the mistakes of the past.
Not to sacrifice the future for the present; not to ignore aggression in the hopes of gaining an illusory peace.
But I can guarantee you this, the days when the Jewish people remained passive in the face of genocidal enemies, those days are over.
We are no longer scattered among the nations, powerless to defend ourselves. We restored our sovereignty in our ancient home. And the soldiers who defend our home have boundless courage. For the first time in 100 generations, we, the Jewish people, can defend ourselves. This is why – this is why, as a prime minister of Israel, I can promise you one more thing: Even if Israel has to stand alone, Israel will stand.
But I know that Israel does not stand alone. I know that America stands with Israel. I know that you stand with Israel.
You stand with Israel, because you know that the story of Israel is not only the story of the Jewish people but of the human spirit that refuses again and again to succumb to history’s horrors.
Facing me right up there in the gallery, overlooking all of us in this (inaudible) chamber is the image of Moses. Moses led our people from slavery to the gates of the Promised Land.
And before the people of Israel entered the land of Israel, Moses gave us a message that has steeled our resolve for thousands of years. I leave you with his message today, (SPEAKING IN HEBREW), “Be strong and resolute, neither fear nor dread them.”
My friends, may Israel and America always stand together, strong and resolute. May we neither fear nor dread the challenges ahead. May we face the future with confidence, strength and hope. May God bless the state of Israel and may God bless the United States of America.

In a few days, Israeli Prime Minister Benjamin Netanyahu will address the US Congress for the third time. The only other foreign leader to have had that privilege was Winston Churchill. Like Churchill when he first spoke to Congress in December 1941, Netanyahu is taking a risk.
For Churchill the risk was to his life – he had to make a hazardous transatlantic voyage aboard the battleship HMS Duke of York through stormy, U-boat infested waters. For Netanyahu the risk is to his own political life and to his country’s relationship with the United States, given the intense presidential opposition to his speech.
But like Churchill was, Netanyahu is a fighting soldier and, like Churchill, a tough political leader, unafraid to shoulder such risks when so much is at stake. And in both cases, the stakes could not be higher, greater than their own lives, political fortunes or rivalries and affecting not just their own countries and the United States, but the whole of the world.

As Sharona Schwartz has noted: “Some religious leaders have noted that the same kind of break in protocol was key to the Jews’ redemption in the Book of Esther. The Jewish holiday of Purim, which this year is celebrated March 5, marks Esther’s success in her mission to thwart Haman’s destructive plan.”

Yes he may well have been raised up providentially at this crucial moment to keep alive the Jewish people, ever on the verge of annihilation by its neighbours. And as he said, to keep Israel alive also means keeping the free West alive.

16 Replies to “Netanyahu at the US Congress”