Once upon a time people got together to play sport and have a bit of fun. Love of the game was the main thing. Not too long ago it was not professional, it was not dominated by big bucks, and it certainly was not about political correctness and ramming radical activist agendas down the throats of the fans. 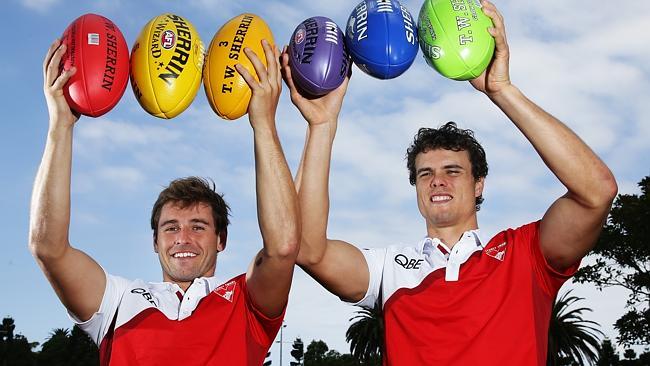 Well, things have changed – big time. Now our major sports codes are as much about radical social engineering, and forcing activist agendas on everyone as they are about actual sport. And the AFL is up to its ears in this rubbish. Consider a piece in today’s newspaper. The report states in full:

An AFL gay pride game to tackle homophobia has been added to the football calendar. The Herald Sun can reveal footy’s first “Pride Cup” match will be played between Sydney and Fremantle during this month’s NAB Challenge.
There are plans for a permanent fixture celebrating sexual diversity during the AFL premiership season. St Kilda is at the front of the queue to own the gay, lesbian, bisexual, transgender and intersex concept.
League chiefs ticked off the Swans and Dockers clash this week after a push by major sponsor NAB. The 50m arc, goalpost pads and goal umpire flags will be decorated in rainbow colours to celebrate the match. The AFL already devotes home-and-away rounds and matches to denouncing racism and celebrating indigenous and multicultural communities but has previously baulked at a themed game aimed at stamping out homophobia.
“The AFL is proud to be hosting this game, and in doing so we are saying to our community that we want to be part of change in Australia,” AFL football operations manager Mark Evans said. “Diversity and inclusion is essential to our game. We say ‘no matter who are, where you are from or who you love, we can all love footy’.”
Sydney premiership ruckman Mike Pyke said the Swans players were happy to be involved. “Equality right throughout the community and in sport is something we should all strive for,” Pyke said. “We think the Swans provide a really inclusive environment for fans at our games we know we have significant support from the LGBTI community.
“This is just another way getting the message across that professional sport encourages an inclusive environment.” Jason Ball, an openly gay footballer who established a Pride Cup match between his local club Yarra Glen and Yarra Junction in 2014, said it was great the initiative had been adopted by the AFL. “It’s a significant step forward that will help make sport and the AFL a place where everyone feels accepted no matter who they are,” he said.
NAB chief executive Andrew Thorburn said the bank approached the AFL last year about using the NAB Challenge as a platform to raise awareness of the LGBTI community. “At NAB we believe in diversity — we want everyone to be themselves at work, home and at the footy,” Thorburn said.
Former Hawthorn president and chairman of beyondblue Jeff Kennett has been a long-time advocate of an annual gay pride round. Sydney and Fremantle will face off in for the inaugural “NAB Pride Cup” game at Sydney’s Drummoyne Oval at 4pm on Sunday, March 15. Swans stars Martin Pyke and Nick Smith will take part in this weekend’s Mardi Gras Parade in Sydney with players from other football codes to help promote equality in sport.

So let me see if I got this straight (no pun intended): “Diversity and inclusion is essential to our game. We say ‘no matter who are, where you are from or who you love, we can all love footy’.” And, “At NAB we believe in diversity — we want everyone to be themselves at work, home and at the footy.”

Oh, is that so? Well, given that there would be far more poker players in Australia than homosexuals, will the AFL and the NAB be having at least one match in honour of all those poker players out there? And of course part of the colourful tapestry of Australian life includes those rare but passionate arsonists out there. So when is the first arson round to be held?

Australian diversity also includes heroin users. In the name of acceptance and diversity and inclusion, will they be getting their own special day as well? There also happen to be many swingers out there, really into groovy and kinky threesomes and group activities. So will they get a polyamory round some day?

Moreover, some people actually get their kicks out of a bit of S&M. They too make up our diverse community, and we dare not be exclusive. So at what point do they get to celebrate their lifestyle? And in the name of diversity, we of course cannot overlook and discriminate against all those cross-dressers out there. Certainly they deserve a bit of attention as well.

Sure, I realise that all these are rather miniscule groups. But then again, homosexuals make up under two per cent of the population – yet they seem to be entitled to their own big deal. So if this tiny group can get such star treatment from the AFL and the NAB, then I guess all these other itsy-bitsy groups can as well.

But I wonder if much bigger and far more representative groups are worthy of such diversity and celebration. Two thirds of all Australians claim to be Christian. Now that is a sizeable group. Yet for some strange reason I am not aware of this group getting any special treatment by the AFL.

Why can’t they have a special day? Bibles could be passed out free of charge – I am sure the NAB would be happy to subsidise this. And prayers could be said at the beginning of each quarter. Surely the AFL would have no problem with that, right?

And hey, some of these Christians are also theologians. In the name of making everyone feel warm and accepted, will there be a theology round as well? Maybe abridged versions of Calvin’s Institutes could be made available for a weekend of theology football. A ‘theology pride’ round does have a nice ring to it.

After all, these guys keep telling us that “diversity and inclusion is essential to our game” and that they “want everyone to be themselves”. So when is the Christian round coming up AFL? Why aren’t you eagerly and proudly pushing for this NAB?

Or is it in fact so much utter baloney when you speak of diversity and inclusion? Is it really just a complete load of codswallop, and instead you have just succumbed to the demands of the militant homosexual lobby? Perhaps your number one priority is not a lousy game of football, but something far more important, like political correctness and radical social change.

I for one have had an absolute gutful of these radicals running the AFL who are ruining a nice game of sport and turning it into the most politicised and the most radicalised social experiment in town. Shame on the AFL. And shame on the NAB.

And by the way, if anyone who calls themself a Christian actually goes to this sodomy pride round, thinking that footy is far more important than standing up for God’s design for human sexuality, and his institutions of marriage and family, then I can suggest to you right now that you probably are not at all a genuine disciple of Jesus Christ.

And another BTW, every one of you who is concerned about this needs to do more than just sit there and get angry – you need to do something. And the very first thing you can do is contact the AFL and tell them how upset you are by this political idiocy. You can contact them here: www.afl.com.au/aflmembership/contact

In addition, you can contact the NAB here: www.nab.com.au/about-us/contact-us