I have learned over the years that far too many folks who call themselves Christians are more than happy to believe in and toss around things that are patently untrue and clearly unbiblical. They pick up some dumb idea or meaningless cliche, often popular in the surrounding secular culture, and will run with it as if it were gospel truth.

Instead of actually reading and studying the Word of God for themselves, they just mindlessly parrot what they picked up elsewhere. They don’t even bother to see if what they are rabbiting on about is actually biblical. We see this happening all the time.

The examples are legion. An old classic of course is this one: “God helps those who help themselves.” Or another: “Cleanliness is next to Godliness.” Neither one of these sayings are to be found anywhere in the entire Bible. Yet countless believers think they are.

Another really unhelpful and even dangerous thing thrown around so often is this: you cannot name names. You cannot rebuke a believer in public. You cannot publicly challenge a fellow Christian. Um, just where in the world did they get this idea? 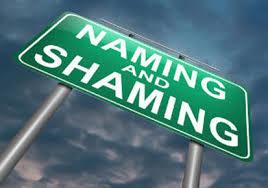 Do they actually read their Bibles? Or just mindlessly repeat whatever they hear? The truth is, the New Testament is full of examples where those pushing false doctrine or sinful living were publicly challenged and rebuked. As I have stated often before, the biblical principle here is pretty clear: public sin warrants public rebuke, while private sin warrants private rebuke.

The latter is of course spelled out rather clearly in Matthew 18:15-17. But when a very public figure is involved in very public sin, be it false teaching or immoral living, then public reproof is called for. Then we can and should name and shame. Then we must utilise public rebukes.

Another example is found in 2 Chronicles 19:1-3. Jehu the seer “went out to meet” King Jehoshaphat and rebuked him in public. There was no private meeting called for where they could chat about their differences over a nice cup of tea. Instead the prophet challenged the king openly, without even arranging an appointment with him.

But, the critic might say, this is Old Testament stuff, and things are different in the New Testament. But are they? Actually we find there the same public rebuke of sin, especially when it comes to false teaching, and we find a willingness to name names as well.

Jesus himself often publicly rebuked folks – even his own disciples. In Matthew 16:22-24 we read about a strong rebuke of Peter in the midst of all the disciples:

Peter took him aside and began to rebuke him. “Never, Lord!” he said. “This shall never happen to you!” Jesus turned and said to Peter, “Get behind me, Satan! You are a stumbling block to me; you do not have in mind the concerns of God, but merely human concerns.” Then Jesus said to his disciples, “Whoever wants to be my disciple must deny themselves and take up their cross and follow me.”

Again we find an instant and strong word of reprimand, in this case for some very faulty and therefore dangerous thinking. Jesus did not tell Peter to meet him in his office at 4:30 to discuss a few matters. His improper thinking had to be challenged then and there – and publicly.

Mark 8:32-33 makes clear the public nature of this stinging rebuke: “He spoke plainly about this, and Peter took him aside and began to rebuke him. But when Jesus turned and looked at his disciples, he rebuked Peter. ‘Get behind me, Satan!’”

Also, in Luke 9:54-55 we find the disciples being given a stern tongue-lashing by Jesus, again with no hint of this being done behind closed doors: “When the disciples James and John saw this, they asked, ‘Lord, do you want us to call fire down from heaven to destroy them?’ But Jesus turned and rebuked them. Then he and his disciples went to another village.”

The disciples too took drastic steps when public sin was threatening the whole church. An obvious example of this was the very swift and very public judgment of the brazen liars Ananias and Sapphira by Peter. Consider what Acts 5:3-5 says:

Then Peter said, “Ananias, how is it that Satan has so filled your heart that you have lied to the Holy Spirit and have kept for yourself some of the money you received for the land? Didn’t it belong to you before it was sold? And after it was sold, wasn’t the money at your disposal? What made you think of doing such a thing? You have not lied just to human beings but to God.” When Ananias heard this, he fell down and died. And great fear seized all who heard what had happened.

Note how “great fear seized all who heard what had happened”. That was exactly why this immediate and powerful judgment of God was carried out: to warn and to educate the whole group on the seriousness of such matters. Once again there was no private powwow where the three of them had a friendly chat sitting around a board table in a conference room.

We see this happening throughout the rest of the NT as well. Especially when false doctrine was involved, very public denunciations were made. False teaching is not a private matter, but it negatively affects the entire body. Therefore it must be dealt with in a public manner.

Consider what we find in 1 Corinthians 5: the case of the brother involved in incest. The whole chapter specifically deals with him – even though his name is not provided. But everyone in the Corinthian congregation would have known exactly who this offender was.

So Paul administers a very strong and a very public rebuke of this man – and of the church for not properly dealing with this case. There seems to be no evidence of Paul having a private chit chat with this guy first. This was such a serious and such a public matter that it had to be dealt with immediately and in a very public fashion.

We get more of this in Pauls’ letter to the Galatians. Like his letters generally, these were read in public to the church or churches in the area. So these epistles, often taking on the false teachers, were already public rebukes. In Galatians Paul goes after the Judaisers and he minces no words. And he blasts the whole lot of the Galatians, as in Gal. 3:1: “You foolish Galatians! Who has bewitched you?”

Moreover, we find there a case of the hapless Peter once again being chewed out – this time by Paul. We read about this in Gal. 2:11-21. Notice what we find in the first four verses of this section:

When Cephas came to Antioch, I opposed him to his face, because he stood condemned. For before certain men came from James, he used to eat with the Gentiles. But when they arrived, he began to draw back and separate himself from the Gentiles because he was afraid of those who belonged to the circumcision group. The other Jews joined him in his hypocrisy, so that by their hypocrisy even Barnabas was led astray. When I saw that they were not acting in line with the truth of the gospel, I said to Cephas in front of them all “You are a Jew, yet you live like a Gentile and not like a Jew. How is it, then, that you force Gentiles to follow Jewish customs?

Once again, we see the biblical principle put into action: public sin calls for public rebuke. There were no courteous letters exchanged, no lengthy correspondence discussing all this, no leisurely tete-a-tete where the pair discussed their differences. No, there was forceful and instant public rebuke.

We find naming and shaming going on elsewhere as well. Consider 1 Timothy 1:18-20 as a primary example of this:

Timothy, my son, I am giving you this command in keeping with the prophecies once made about you, so that by recalling them you may fight the battle well, holding on to faith and a good conscience, which some have rejected and so have suffered shipwreck with regard to the faith. Among them are Hymenaeus and Alexander, whom I have handed over to Satan to be taught not to blaspheme.

And Paul was not alone in this. John too was not averse to public denunciations. As we read in 3 John 1:9-10: “I wrote to the church, but Diotrephes, who loves to be first, will not welcome us. So when I come, I will call attention to what he is doing, spreading malicious nonsense about us. Not satisfied with that, he even refuses to welcome other believers. He also stops those who want to do so and puts them out of the church.”

And as you would recall, entire churches were named and shamed. Most of the seven churches in Revelation were given a fiery blast by God through John for their shortcomings. Only the churches at Smyrna and Philadelphia were spared such public censure.

It should be clear by now that there is a time and a place for the name and shame approach, and there is certainly a need for public rebuke and exposure of public sin. We need wisdom and discernment here. I am not saying we now have license to publicly attack everyone we happen to slightly differ with.

The norm is still for private dealings with one another as found in Matt. 18 as I mentioned. But when some very public Christian leader, teacher, preacher or televangelist makes some very public utterances which are clearly contrary to sound doctrine, or are being used to excuse or cover up sinful lifestyles, then that person must be called out, loudly, forcefully, swiftly and publicly.

9 Replies to “On Naming Names”