Sadly much of Western Christendom has fallen into two related traps: most Christians are just as consumeristic and materialistic as any non-Christian; and much of our church promotion centres on secular marketing methodology and a fixation on entertainment.

We are just as fixated on wealth, riches, goodies and material things as our non-Christian neighbours. And much of the way we do church and seek to bring in non-Christians is little more than mimicry of the boardroom, the marketplace, and Hollywood.

We live for wealth and mammon, we conduct our church business in terms of a modern corporation, and we even market a gospel appealing to greed and promoting get-rich schemes. We differ little from the world in other words.

The prosperity gospel is of course an all-too obvious and blatant example of all this. But the evangelical church as a whole has in many ways drunk deeply of this poisoned chalice as well. The demands of Christ have been replaced with the lust of the flesh and the lusts of the eyes, as aided and abetted by Wall Street and Madison Avenue. 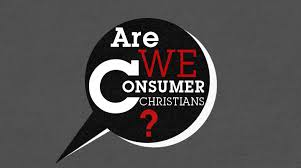 But the interrelationships between religion and consumerism are worthy of examination. The fact that Protestantism helped give birth to capitalism, which in turn helped to undermine its parent, is an intriguing story. I have to forgo that avenue, but note that for an obvious starting point for such explorations one should consult Bell’s The Cultural Contradictions of Capitalism (1976), along with the older works of Tawney (1926) and Weber (1930).

In his helpful 1998 volume, The Way of the (Modern) World, Craig Gay notes the parallels and connections between the fixation on self and the consumer culture. He speaks of the “obvious affinities that exist between therapeutic and individualistic sensibilities and consumer capitalism.”

Both influences have undermined religion or rendered it ineffectual:

The historical coincidence of therapeutic sensibilities and consumer capitalism has thus contributed quite substantially to the secularization of modern society and culture. . . . Religion has, for the most part, been a victim of this process of therapeutic commodification. It has been reduced to the status of a therapeutic product in the contemporary marketplace of ideas, available for private consumption but not of much interest or importance otherwise.

Thus it should not be surprising that in a culture where self is elevated, deity is emasculated, and consumerism is glorified, the church should find itself in that slipstream, reflecting those values. Roger Lundin in The Culture of Interpretation calls this phenomenon “evangelical culture lag”.

He writes: “With this term, I am referring to the evangelical habit of adopting the practices of general American culture several years after they have become established in, and thus made safe by, the society as a whole.” While it may seem like a good idea to learn from successful business models and thriving corporations, the church is not a business. As David Wells reminds us in God in the Wasteland,

The fact is that while we may be able to market the church, we cannot market Christ, the gospel, Christian character, or meaning in life. The church can offer handy childcare to weary parents, intellectual stimulation to the restless video generation, a feeling of family to the lonely and dispossessed – and, indeed, lots of people come to churches for these reasons. But neither Christ nor his truth can be marketed by appealing to consumer interest, because the premise of all marketing is that the consumer’s need is sovereign, that the customer is always right and this is precisely what the gospel insists cannot be the case.

Plenty of other Christian commentators could be appealed to here. Let me refer to a few more. American pastor and author Dr Gary Gilley. He has written three related volumes which offer a good assessment of where the modern church is at. I refer to these titles:

Let me say at the outset that I don’t necessarily agree with everything he says, but for the most part he offers some incisive reflection and criticism of the modern evangelical church. Let me offer a few snippets from his first volume in which he discusses the market-driven church growth movement:

It appears that the church is in lockstep with the world. The problem is this – Christians have been seduced and trained by the same forces that have enticed society as a whole. Too many Christians, just like their unsaved counterparts, are impressed by the form rather than the substance; are seeking thrills and excitement; are more apt to respond to emotional manipulation than to rational discourse. How does a church compete in this rather crowded marketplace? If entertainment has become the primary value of the American way of life (as some are suggesting) then how can the church vie unless they become bastions of entertainment? But if they give in to this powerful temptation has not the church been transformed into something other than the church?…
The problem is that the main business of entertainment is to please the crowd, but the main purpose of authentic Christianity is to please the Lord. Both Scripture and history have repeatedly shown that it is seldom possible to do both at the same time, for very long.

The premise of all marketing is that the consumer must be pleased; he must be kept happy; he must be given what he needs, or has been programmed to think he needs, if we are to succeed. This premise works very well for say, McDonald’s, but can it be adopted by the church? Certainly it can, but is not the church, and more importantly, the gospel message, altered and distorted in the process?

Michael Horton in his 1991 book Made in America puts it this way:

In the struggle to market modern Christianity, modern sales representatives have accommodated this reduction of Christianity. In consumer religion, Christianity becomes trivialized. Its great mysteries become cheap slogans. Its majestic hymns are traded in for shallow jingles, often sung off the image from an overhead projector, much like an advertising executive uses to sell a client on an ad campaign. And its parishioners, now unashamedly called audiences, have come to expect dazzling testimonies, happy anecdotes, and fail-proof schemes for successful living that will satiate spiritual consumption.

Let me finish with one other writer. I have often quoted from the non-Christian social commentator Neil Postman. Let me do so again here. In his important 1985 book Amusing Ourselves to Death he examines how entertainment and things like television have dumbed us down.

As to how religion fares in the consumerist world of television he writes:

Religion, like everything else, is presented, quite simply and without apology, as an entertainment. Everything that makes religion an historic, profound and sacred human activity is stripped away; there is no ritual, no dogma, no tradition, no theology, and above all, no sense of spiritual transcendence. On these shows, the preacher is tops. God comes out as second banana.

Even he gets it right, while so many Christians do not seem to get it: “Christianity is a demanding and serious religion. When it is delivered as easy and amusing, it is another kind of religion altogether…. There is no doubt, in other words, that religion can be made entertaining. The question is, by doing so, do we destroy it?”

I think we are witnessing the answer to his question. The entertainment-mad, market-driven approach to Christianity has reduced it to a mere shell of its former self. Indeed, it has been transformed into an unrecognisable mess. Gone are the hard demands of the gospel, the magnificence and grandeur of God, and the seriousness of sin.

It is time a lot of churches and church leaders learned this lesson.

7 Replies to “The Consumerist, Market-Orientated Church”