We know that the mainstream media is comprised largely of secular humanists and lefties who more often than not hate Christianity with a passion. And it shows – big time. The relentless attacks on Christianity, Christians and Christian values are encountered day in and day out.

We had another perfect example of this just the other day. It was an appallingly bad article by some columnist for the Fairfax Press which was yet another hatchet job on Jesus Christ. Because it was so ludicrously idiotic and lacking in any substance whatsoever, I at first thought I would ignore it altogether. 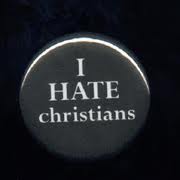 Nasty and intellectually dishonest attack pieces like this simply do not deserve any attention, and are best simply left to be quickly forgotten about. Yet I will raise it here, not to dwell on the article itself for very long, but to look at the more important issue, namely how our mainstream press has now become the home of all things anti-Christian.

It is as if the media – or large portions of it – have decided that the main reason for their existence is to push the atheist and secular and leftist worldview. It has long ago given up any pretence of simply reporting the news in an accurate and objective fashion.

It is now just in the business of pushing the agendas of every radical and misotheistic group in town. My example is a reprehensible opinion piece by one Elizabeth Farrelly. And who in the world is she? She is a “Sydney Morning Herald columnist, author, architecture critic and essayist”.

Oh, so that gives her the necessary qualifications to weigh into historical and theological revisionism? But if her name rings a bell, it should, since I have dealt with her before. She has been spewing forth the most silly and deceptive rubbish about Christianity for years now. I interact with her here for example: billmuehlenberg.com/2014/09/25/yep-i-am-now-a-terrorist/

And now she has the audacity and the utter disrespect of all Christians – and others – to actually write, “Could Jesus have actually been a woman?” Umm, no. End of story. This sort of foolishness, as I say, is not even worth spending time on. I will mention two lines of hers and then move on.

“Jesus’ role and resonance are so intensely female it makes me wonder. Was Jesus actually a woman?” And her evidence for this? She has none of course. She speaks of Jesus who ‘opposes male power structures’. Um no, he opposed sinful structures – male or female.

The one who formed a whip and overturned tables in the temple was no woman – let alone girly man. The one who is coming again on a war steed to bring judgment on the unrepentant is no wimp or effeminate metrosexual. He is the Son of God and forever shall be.

But as I say, the thing that really bugs me is how the MSM keeps dishing up this wretched garbage. The thesis is so completely preposterous that one has to ask what else they will cough up. One might as well pen an article for a major newspaper seeking to make the case that Hitler was actually an observant orthodox Jew.

Or that Nelson Mandela was a member of the KKK, or that Princess Diana was really a pepperoni pizza. That is how sensible, plausible and intelligent her idiotic claims are. We don’t have the slightest reason whatsoever to even posit such an outlandish and mischievous claim.

The real question is why in the world any newspaper would even run with such a piece. And then to run with it on the holiest weekend on the Christian calendar. That is the real issue here. The utter contempt and despicable loathing the secular left media has for the Christian faith knows no bounds.

Imagine if the SMH came out with a piece at the beginning of Ramadan claiming Mohammed was a woman. Of course they would never ever dream of doing this – never in a million years. Or imagine taking a top ranking aboriginal icon and blasting him by claiming he may not have even existed, or was really a slice of Swiss cheese.

That is how awful and how ludicrous this piece is, but once again, they would never ever dare to go that low. There is only one religion which the SMH and the secular media will ever attack on a regular basis and on their most holy days.

About the only thing that might be said in defence of this reprehensible article is the fact that it appeared on April 1. Perhaps this was just a really sick joke on the part of the SMH – a twisted and ugly April Fool’s Day joke. Given what Scripture says about atheists and mockers, the real fools here are those at the SMH.

It is time to put this lousy excuse for a newspaper out of its misery.

13 Replies to “The MSM’s Ongoing Hatred of Christianity”