The first thing that entered my mind when the Irish decided to commit national suicide by voting for the destruction of marriage was: “As in the days of Noah…” Back then evil became so pronounced, so widespread, and so terrible, that only a handful of people were spared the just judgment of God. 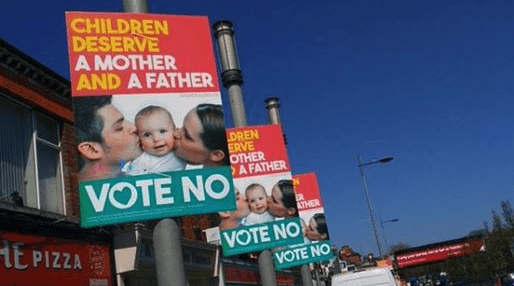 One of the greatest evils in the recent Irish vote of course was the total disdain shown to the children. They have been denied the fundamental human right to be raised by their own mother and father. This is nothing less than child abuse.

In my several books on homosexuality I document thoroughly how children suffer in such circumstances. Others of course recognise these basic truths as well. David van Gend of the Australian Marriage Forum put it this way:

A constitutional right to same-sex marriage means a constitutional right to same-sex adoption and surrogacy, and that means motherless and fatherless families are now enshrined as an ideal in the Irish Constitution.
Irish Prime Minister Enda Kenny said the vote was “Yes to love”- but there are children who will never know the love of their mother because of Friday’s constitutional amendment. He said it was “Yes to inclusion”- but it deliberately excludes children of same-sex couples from “the natural and fundamental group unit of society”, which is how the Universal Declaration of Human Rights describes the trinity of mother, father and child.
If equality for gay adults means inequality for kids, where is the justice in that?
If removing spurious discrimination against gay adults means imposing genuine discrimination on children who are deliberately deprived of a mother or a father, what is the reason to celebrate?
Gay Irish celebrity blogger Paddy Manning rejected claims of discrimination against gay couples, saying “Marriage is, at its heart, about children and providing those children with their biological parents. Recognising difference is not discrimination.”

We are giving the status of marriage, superior and antecedent to all positive law, to a family that can only bring new children into the world through surrogacy, egg donation or sperm donation.
We have damaged irreparably the connection between marriage and a child’s right to know and be cared for by the two people who each give them half of their biological, social and familial identity.
Sure, reproductive technologies are used anyway, but before May 22nd, no one could say that the Irish people voted to affirm in our Constitution something that inevitably separates children from half their genetic heritage and one half of their relations.
Some day, there will be a young Irish woman wandering the streets of Copenhagen. She will have been raised by her lesbian mother and her partner, both of whom she loves dearly, and who are great mothers.
But she also has a deep longing to know the other half of herself, her father, and simple things like whether she got her love for music or the shape of her hands from him. All she knows is her father was a Danish sperm donor. She has no idea how many half-siblings she has. She is in contact online with other sperm donor children, some of whom have 150 half-siblings.
Her father’s address, given when he sold his sperm, is long out of date. So she wanders, looking at Danish faces, wondering, is that man my sperm donor father? Could that be a half-sibling?
It would have happened anyway, regardless of the amendment. But she also has to deal with the crushing fact that in 2015, her fellow Irish citizens voted for it and affirmed this arrangement that deprived her of half her identity. They voted that it was natural, primary and fundamental, and enshrined it into the Constitution.
These are not comfortable realities. We may want to banish people who disturb the dominant narratives, but certain truths cannot be wished away.

It is not just children who suffer, but the very notion of families – including motherhood and fatherhood. Even radical feminists like Germaine Greer have entered into the debate. Greer berated homosexual Elton John for decimating motherhood:

Germaine Greer has reportedly accused singer Sir Elton John and his husband David Furnish of “deconstructing the concept of motherhood”. The men are parents to sons Zachary, 4, and Elijah, 2, who were both born to a surrogate.
Referring to the fact that Furnish is listed on the birth certificates as the children’s mother, Greer, who was speaking at the Hay Festival, said: “Sometimes I think that really the problem is the concept of motherhood, which we can’t give any real structure to.
“Sir Elton John and his ‘wife’ David Furnish have entered on the birth certificate of their two sons that David Furnish is the mother. I’m sorry. That will give you an idea of how the concept of motherhood has emptied out. It’s gone. It’s been deconstructed.” In comments reported by the Daily Mail, the author of The Female Eunuch then appeared to criticize the IVF process by which the couple became parents.

While it is good to see the left implode and resort to attacking one another, in the meantime the children continue to suffer. And as expected, the left in Australia has jumped on board, demanding, for the umpteenth time the “right” to sodomite marriage here.

With appalling audacity, opposition deputy leader Tanya Plibersek wanted all Labor members to be forced to vote for this sham marriage. This meant that leader Bill Shorten had to step in and say that a bit of democracy would remain in the party over this issue. But the party is still fully committed to this abomination.

So while the party is divided on this, this is becoming a broken record with them. Indeed, leftists have now pushed over a dozen moves for this pseudo marriage in as many years. It is a war of attrition: they keep hammering away, believing that eventually they will wear down those still concerned about the wellbeing of children and family.

And coercion and intimidation seem to be the only way the other side operates here. As Miranda Devine writes:

The intimidation and silencing of contrary voices in the same sex marriage debate is despicable and desperate. The forced resignation of Mozilla’s CEO Brendan Eich after he was discovered to have once donated $1,000 to a political campaign against same-sex marriage is a case in point.
So is the taxpayer funded SBS’ refusal to run a gentle 30-second advertisement in favour of traditional marriage during its Mardi Gras coverage. And the compulsory mediation Toowoomba physician David van Gend was forced to attend after he wrote an article saying a baby deserves both a mother and a father.
The latest targets of militant gay thought police are the Italian designers Domenico Dolce and Stefano Gabbana, who told an Italian magazine this month: “The only family is the traditional one.”
The condemnation was immediate, with an outraged Sir Elton John calling for a boycott. But Dolce & Gabbana are gay so they can hardly be labelled bigots. “I believe in the traditional family,” said Gabbana. “It is impossible to change my culture for something different. I respect all the world, all the culture … We love gay couples. We are gay.”
It takes gay people to come out and say what straight people are too intimidated to say. In France, when hundreds of thousands of protesters took to the streets to oppose gay marriage and same sex adoption legislation in 2013, prominent homosexuals led the way. “The rights of children trump the right to children,” was their catchphrase.
Rather than shutting down debate and forcing an outcome by intimidation and exhaustion, Australian same-sex advocates need to make the case for why redefining marriage to disconnect it from children would make society better and not worse.
It’s in everyone’s best interests to strengthen marriage as the foundational institution of civil society, in which a man and a woman raise solid citizens, gay or straight, to replenish the moral capital of the future. That’s where our energies should be focused, rather than this relentless legislative “marriage equality” merry-go-round that comes up every six months.

All over the West we find adults who are completely obsessed with their own selfish lusts and wants. They do not give a rip about the wellbeing of children and the social good. It is only the instant gratification of their own desires that matters.

In the past we rightly censured and condemned such utterly selfish and juvenile behaviour. Now we honour and champion it, and even have entire political parties devoted to it.

When a culture declares war on its own children, then you know we are nearing the end of all things. As Dietrich Bonhoeffer once put it, “The ultimate test of a moral society is the kind of world that it leaves to its children.”

32 Replies to “The West’s Hatred of Children – and Families”