Hands up, who enjoys persecution? OK, so no one does. Fair enough. I don’t either. But whether or not we like something has nothing to do with if it is bound to happen. And the Bible makes it perfectly clear from Genesis to Revelation that those who are God’s people will have plenty of opposition, persecution and rejection.

This is one of the clearest themes running throughout Scripture. Those who love and serve God will always be hated and resisted by those who hate God. Yet many believers still think they can live a problem-free and easy journey through life. Well they can, but only if they refuse to be true disciples of Jesus Christ. 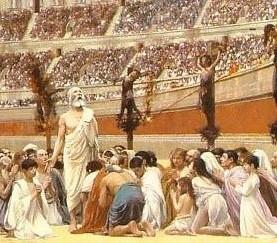 It is bizarre but I still find myself having to deal with this with other believers. As but one example, on another site a while back I had posted something on persecution from Art Katz. I forget now what the quote was, but it had to do with true Christianity always involving persecution. It may have been this one:

There is an apostasy in the Church that is taking place even presently. What will it be when things become tough, when we have to pay something for being a believer, when we open ourselves to opposition and persecution by virtue of our faith? Now it’s a snap; now we’re not experiencing what they are experiencing in China and Viet Nam and other places of persecution. But the day will come when the Anti-Christ spirit will be global, and to meet like this will be perhaps at the risk of our lives, when the doors could be broken in at any moment by the police or by the authorities because what we are about is illegal – society has determined that. How many of us will stand then? Do you see why it’s so critical that our faith not rest on natural things, on pseudo-spiritual things, affected spiritualities where choruses or catch-phrases sustain us? We need to become increasingly authentic in God.

But this way of thinking was not to everyone’s liking. One fellow was not interested in talk about opposition and cited a familiar Scripture: “So the church throughout all Judea and Galilee and Samaria enjoyed peace, being built up; and going on in the fear of the Lord and in the comfort of the Holy Spirit, it continued to increase” Acts 9:31.

He seemed to think this should put a stop to any talk about persecution and suffering. This is how I replied to him at the time:

Thanks …., but of course context is everything, and a text without a context is a mere pretext. This passage makes perfect sense given the context. Saul had just been converted, so the main source of persecution of the early church was temporarily halted. But persecution obviously continues throughout the rest of the book of Acts. Indeed, what did Jesus tell Saul at the time of his conversion? Just back up 15 verses: “I will show him how much he must suffer for my name” (Acts 9:16).
This is in accord with the entire biblical teaching. Jesus said “Remember the words I spoke to you: ‘No servant is greater than his master.’ If they persecuted me, they will persecute you also” John 15:20.
Or as Paul said, “In fact, everyone who wants to live a godly life in Christ Jesus will be persecuted” 2 Timothy 3:12. Sure, we enjoy any time of relative peace, but the Bible from cover to cover makes it absolutely clear that those who are truly his will suffer persecution and be hated by the world. I can’t see how any biblical Christian can avoid this clear theme in Scripture.

The Timothy passage I mentioned above is given in the form of a promise. While so many believers like to speak about claiming every promise of God, it seems very few are willing to claim this promise. Indeed, such warnings about our fate as believers facing hostility from the world are repeated time and time again.

Jesus often spoke about facing persecution. A few more passages that can be appealed to include:

Matthew 5:10 Blessed are those who are persecuted because of righteousness, for theirs is the kingdom of heaven.
Matthew 10:23 When you are persecuted in one place, flee to another.
Mark 13:9 You must be on your guard. You will be handed over to the local councils and flogged in the synagogues. On account of me you will stand before governors and kings as witnesses to them.

Paul also spoke so often about this:

2 Corinthians 4:8-10 We are hard pressed on every side, but not crushed; perplexed, but not in despair; persecuted, but not abandoned; struck down, but not destroyed. We always carry around in our body the death of Jesus, so that the life of Jesus may also be revealed in our body.
1 Thessalonians 3:4 In fact, when we were with you, we kept telling you that we would be persecuted. And it turned out that way, as you well know.
2 Thessalonians 1:4 Therefore, among God’s churches we boast about your perseverance and faith in all the persecutions and trials you are enduring.

And all the great men and women of God testify to these truths:

“I have often thought that the best Christians are found in the worst of times.” John Bunyan

”I was honored today with having a few stones, dirt, rotten eggs, and pieces of dead cat thrown at me.” George Whitefield

“Persecution is the heirloom of the church, and the ensign of the elect.” Charles Spurgeon

“We have failed. We should have made the people strong for persecution rather than telling them Jesus would come first. Tell the people how to be strong in times of persecution, how to stand when the tribulation comes – to stand and not faint.” Corrie Ten Boom

“It was strictly forbidden to preach to other prisoners. It was understood that whoever was caught doing this received a severe beating. A number of us decided to pay the price for the privilege of preaching, so we accepted [the communists’] terms. It was a deal; we preached and they beat us. We were happy preaching. They were happy beating us, so everyone was happy.” Richard Wurmbrand

“The Christian need not expect to escape opposition. As long as Satan stands to resist the sons of God, as long as the world and the flesh remain, the believing man will meet opposition. Sometimes it will be sharp and obvious, but mostly it will be just the hidden and unsuspected friction set up by circumstances. No one need be anxious about this, however, for God has figured it in and made allowance for it.” A.W. Tozer

“You mark my words, and it won’t be long … when persecution begins in this country [USA], and it strips everything from you, and most of the evangelical church goes totally apostate, and little groups are left to be berated, THEN you will see that Christ is enough.” Paul Washer

“A true man of God prepares God’s people for persecution. The false teaches them how to avoid it.” David Pawson

“Persecution is an enemy the Church has met and mastered many times. Indifference could prove to be a far more dangerous foe.” Brother Andrew, God’s Smuggler

“One of the surest ways to guarantee church growth is to try to persecute it.” Ravi Zacharias

Again, no one likes hostility, opposition, persecution and suffering. And we of course are not to go out of our way seeking such things. But if you are a true follower of Jesus Christ you will face this. If you are not experiencing this, then you may need to examine yourself to see if you are in fact really His.

13 Replies to “Facing Up To Persecution”