Yet incredibly we have some “Christians” actually defending mass murder. They are siding with the killers against God and his holy hatred of the shedding of innocent blood. These folks are not Christians at all, but woefully deceived dupes of Satan. 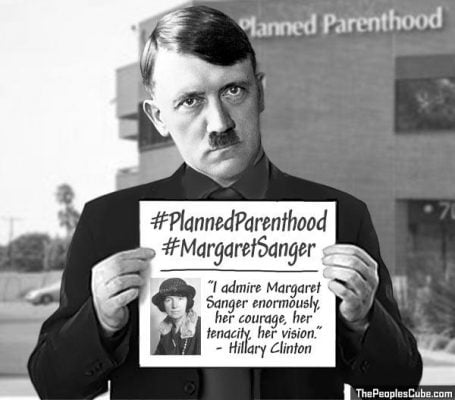 They are doing Satan’s work for him by attacking real Christians who resist the shedding of blood, while they in fact defend the murderers. This is just so mind-boggling that you would have to argue this just can’t be happening. But sadly it is occurring.

Consider one fellow on another website who rightly posted on Cecile Richards, President of Planned Parenthood, the world’s biggest baby killing operation. He correctly referred to her as a “murderous lady”. Well of course she is. She and Hitler are like sister and brother when it comes to genocide and the slaughter of the innocents.

Yet some completely clueless wonder who claims to be a Christian actually got all upset and sent in a strong comment condemning him! I kid you not! This is what he said:

Don’t you get it? Jesus explicitly says not to judge. Your posts go way beyond disagreeing with this lady. You are in the realm of vilification and slander. Do you think it is okay to accuse this lady of breaking God’s law, when you are yourself by publically denouncing her? I know I am being blunt here, but the bible says that Daddy God has no darkness in Him – there is no concept of doing the wrong thing to achieve a good outcome in His Kingdom.

Wow, mind boggling. He is actually claiming the slaughter of babies and the selling of their baby parts for profit is no worse than calling out those who do this! Sorry, but when I find stuff that is this morally and mentally challenged I feel compelled to respond. So I sent in this reply to the guy:

Imagine that: not only is he 100 per cent wrong on the issue of judging, and not only does he judge others while telling them how wrong it is to judge, but he actually goes to bat for baby killers. If this is the stuff of Christianity these days, we might as well just close down all the churches, turn them into gay discos, and just give the whole thing away.

But wait, there’s more. If it were just one-off fruit loops like this guy, it would not be so bad. But we actually have entire denominations shrilling for Planned Barrenhood (or is it Banned Parenthood?) while attacking true followers of Jesus Christ. Consider a recent report on this uber-madness and gross spiritual deception:

According to a group of liberal clergy, killing babies in abortions and selling their body parts to the highest bidder is “God’s work.”
On July 29, the Planned Parenthood Clergy Advocacy Board said the undercover videos portraying their executives haggling over the cost of aborted babies’ body parts are simply an attack on health care.
Jeffrey Walton from the Institute on Religion and Democracy reports that the board is made up of religious leaders from the United Church of Christ, Episcopal Church and American Baptist Churches as well as clergy from Reformed Jewish and Unitarian Universalist congregations.
In a statement the clergy said, “As faith leaders committed to justice, honesty, and liberty, we are troubled by the decades-long campaign of harassment against Planned Parenthood and those they serve. Our faiths demand care for those marginalized by poverty and other oppressions. Faith leaders have supported Planned Parenthood for nearly 100 years because of our shared goals: every person — regardless of income, race, or religion — deserves access to safe, affordable, high-quality health care.”
They concluded, “Our religious traditions call us to offer compassion, not judgment. People who work for Planned Parenthood give care and respect to those in need, doing God’s work. For this we are grateful.”

OK, so let me get this right: killing babies and selling their body parts is doing God’s work. OK, got that. And there I thought that God was a God of life and love. But it seems he is really a God of death and hate. Hmmm, so all those centuries we have got God wrong, and these trendy folks are here to set the record straight. Right.

When people flat out reject God and his Word that is one thing, but when they actually seek to use God as a cover for pure evil and everything that God hates, then you know that demonic deception is in full swing. These church leaders and groups are serving the Synagogue of Satan, not the living and true God.

So, are these fake Christians mass murderers? Well perhaps not directly, But as they do everything they can to defend, promote and exonerate those who are mass murderers, they are just as bad in my books. They are doing the devil’s work big time. And one day they will stand before a Holy God to give an account.