Each passing day as we learn more about the money-hungry killing machine known as Planned Parenthood, the more we see obvious and clear parallels to the Nazi killing machine. There seems to be so much common ground here that PP is really no different morally speaking than the Nazis were.

Indeed, the origins should tell us all we need to know. Adolf Hitler was greatly impressed with and influenced by the diabolical eugenicist Margaret Sanger – who just happens to be the founder of Planned Parenthood. The odious worldview of the Nazis aligned so very well with that of Sanger.

For more on how greatly Hitler was influenced by the eugenicists of the day, including Sanger, one should consult the important 2003 volume by Edwin Black, War Against the Weak: Eugenics and America’s Campaign to Create a Master Race.

Given those connections, we should not be surprised about the shocking revelations emerging today about this mega baby killing machine. The same mindset and ethos prevails, and the same horrible outcomes are being realised. PP alone is responsible for the death of more babies than Hitler was of Jews.

Of course the same callous disregard for human life can be found in both groups. Jews and others were viewed as subhuman by the Nazis, and so could be killed or “medically” experimented upon as they liked. PP treats the unborn baby in exactly the same fashion.

And the same rationale is being used here as well: ‘If these folks are going to die anyway, why not put to good use their body parts.’ Just yesterday on Fox News I heard one radical leftist guest say exactly this. ‘Hey, they are going to die so we might as well make good use of them.’

Um, where have we heard all this before? During the Nuremberg Trials after WWII we heard plenty of testimony about what was being done with the body parts of Jews and others. Consider the case of Nazi doctor Julius Hallervorden. As one author says,

“Hallervorden, who was shipped six hundred preserved brains of ‘mercy death’ victims for his research in neuropathology, testified after the war: ‘There was wonderful material among those brains. . . . Where they came from and how they came to me was really none of my business.”

Said Dr. Hallervorden: “If you are going to kill all these people, at least take the brains out so that the material can be utilised.” Hmm, sounds just like the officials at PP and their defenders. Needless to say, Hallervorden was ultimately found guilty of major war crimes. But when it comes to PP, we still treat them as heroes.

But let me mention one more Nazi doctor, and you tell me if you see any parallels with what PP or any other abortionists are doing to babies: 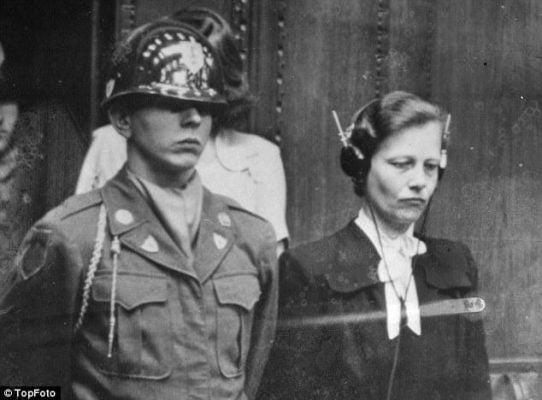 Dr. Herta Oberheuser, in order to kill them, would inject oil and evipan into children’s blood streams. While the children were still conscious, she removed their vital organs and limbs with no anesthetics. They usually had about 3-5 minutes before death would come. Herta also focused on inflicting wounds that were similar to the wounds the German soldiers got on patients. She would then rub objects such as glass, wood, rusty nails, and sawdust into the wounds. Herta was the only female defendant at the Nuremberg Medical Trials. She received a 20 year sentence, but only served 10. After being released in the April of 1952, she became a family doctor in Stocksee, Germany. Her license was revoked in 1958.

Richard Cromwell has recently penned a piece entitled “It’s Getting Tough To Tell Planned Parenthood From Nazis”. He begins his article this way:

German SS officer and Auschwitz “physician” Josef Mengele once wrote, “There’s only one truth and one true beauty …There’s no ‘good’ or ‘bad’ in nature. There’s only ‘appropriate’ or ‘inappropriate’… Both sides receive equal chances. Nevertheless, nature provides a strainer. Things that are ‘inappropriate’ fall through since they lose in the struggle for survival.”
More lately, Dr. Deborah Nucatola, Planned Parenthood’s senior director for medical services, had this to say: “We’ve been very good at getting heart, lung, liver, because we know that, so I’m not gonna crush that part. I’m gonna basically crush below, I’m gonna crush above, and I’m gonna see if I can get it all intact.”
It’s almost like Planned Parenthood is the strainer and babies, those inappropriate little consequences of life, fall through in the struggle for survival while the organs, the appropriate parts, survive and get sold at market. Ain’t progress grand?

Planned Parenthood is run by a bunch of nihilists, as evidenced by the fact that they obviously find life meaningless. Nihilists! I mean, say what you want about the tenets of National Socialism, at least it’s an ethos, a philosophy of life that attempts to provide meaning to and excuses for butchery. When it comes to harvesting organs for sale, solely for the sake of $30 to $100, you’ve officially abandoned any claim to an ethos, even a disgusting and misguided one. When you have no intention of stopping, because progress! even as the death toll rises, you’re nothing more than state-sponsored murderers.

Currently we now have ten US state investigations and three Congressional investigations into the goings on of PP. Texas is one such state. Consider this recent report:

But all these investigations should not be limited to some of the more obvious dodgy deals of PP. The very rationale and purpose of PP (the killing of innocent human life) should be called into question. While the defunding of PP is long overdue, we should look more closely at not just curtailing taxpayer funding, but at curtailing the entire organisation.