Planned Parenthood founder and hard-core eugenicist Margaret Sanger of course felt she was doing “good” and she was happy to embrace and apply evolutionary theory in doing so. And Darwin did not just write about what he observed in nature and the animal world in his 1859 The Origin of Species – he of course applied it to mankind in his 1871 The Descent of Man.

All these differing streams of course are not isolated incidents. All felt they had the welfare of humanity at heart, and all drew from a common worldview. As Richard Weikart put it in his important 2004 volume, From Darwin to Hitler: Evolutionary Ethics, Eugenics, and Racism in Germany: 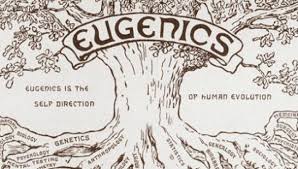 “Darwinism by itself did not produce the Holocaust, but without Darwinism… neither Hitler nor his Nazi followers would have had the necessary scientific underpinnings to convince themselves and their collaborators that one of the world’s greatest atrocities was really morally praiseworthy.”

And again: “Not only did many leading Darwinists embrace eugenics, but also most eugenicists – certainly all the early leaders – considered eugenics a straightforward application of Darwinian principles to ethics and society. Darwin’s cousin, Francis Galton, the founder of modern eugenics, developed his ideas upon reading Darwin’s Origin of the Species.”

And he offers meaty chapters on how social Darwinists declared war on traditional morality, especially sexual morality. Many leading radical feminists in the early part of the 20th Century were fully supportive of eugenics. There were plenty of these folks in pre-Nazi Germany, but America had Sanger and Britain had Marie Stopes arguing the same thing.

One recent article nicely ties much of this together. Robert Oscar Lopez speaks about the atrocities being exposed at Planned Parenthood, and connects the dots with other social revolutions. In his piece, “Planned Inhumanities: From Roe to Obergefell” he writes:

“Well-educated people believe that ‘planned parenthood’ can lead to a socially just world. That hubris is the main horror from which all these other abhorrent things descend.” He goes on to discuss “The Monstrous Idea of ‘Planning’”:

It is the “planned” part of the organization’s title that needs to be urgently criticized. What kind of society is so lacking in humanity that it thinks “parenthood” – a phenomenon responsible for, well, the perpetuation of everything social about us – can be regimented, organized, scheduled, commoditized, bought, sold, and programmed by people? And in particular, by the people running this soulless association? Stop for a moment and consider the intellectual consequences of this foundational belief that humanity can be “planned.” Such a belief means that humans can be edited and arranged, by contract if necessary. To be editable, people, particularly children, must become objects rather than subjects.
Once they become objects, children can be treated as dehumanized products in multiple ways, all bad. They can be disposed of, like integrated waste, when they are not convenient or not proceeding according to plan. Just as we recycle cans of Diet Coke and milk cartons, we can try to limit the wastefulness of our garbage by recycling the broken-down parts of people: their livers, hearts, lungs, and brains. All of this is management of objects, which costs money, so who is to say that there shouldn’t be some remuneration? Why not reimburse the people who are stuck with this waste for the cost of transporting and recycling it? Why not pay them a salary and make the salary attractive so that qualified professionals are indeed willing to take on such a ghoulish task?
The flip side of the disposable child, of course, is the child as a desired commodity. Since people can be thrown out when they are not convenient, they can also be manufactured and maintained through industrialized processes, when the natural process of lovemaking is not convenient. And alas, this leads us straight to the sublimities of Justice Kennedy’s majority opinion in Obergefell v. Hodges.
Kennedy’s opinion emphasized the constitutional right of gay couples not to be lonely. According to Kennedy, the Fourteenth Amendment assures that gay couples should be given marriage licenses lest they call out to the universe and find nobody to answer back to their emotional needs with love.
Obergefell brings Roe v. Wade to its climax because it completes the transformation of children into objects. For children will be forced to love gay adults who are not their parents. To Kennedy, gay adults have a right not to feel lonely, which includes the right to start families. In fact, he states that they have a right to “custody” and “birth certificates” (i.e., birth certificates falsified to include two same-sex parents and erase biological parents of the opposite sex). To satisfy the human right to dignity and to thwart the civil injustice of “loneliness,” children must be produced and provided to people who want them, whether or not those people conceived the child by making love.
Children not only can, but must be manufactured. The transfers of custody must generate orphans and abandoned children, paying gamete donors and surrogates to abandon and orphan their offspring, so that this new product – the loving and obedient human being – can be delivered to paying customers.
You can’t be against Roe but for Obergefell. It all goes together. The small but crucial part of the electorate – largely made up of younger Americans – who oppose abortion but support gay marriage are perilously deluded. The objectification of children through one means will lead inexorably to the objectification of children through another means. The “child as waste product” and “child as product for sale” are the same child: the dehumanized and “planned” child suited to make paying customers happy.

He is absolutely right to bring together in this way the commodification of children and the depersonalisation of humanity. Of course with hindsight it is easy to see just how bad the Darwinist-eugenics mix really is. But back in its heyday when it was being promoted by all sorts of respectable folks, some voices were offering a warning.

While folks like Sanger were calling the frail, needy and weak “human waste” others, such as G.K. Chesterton, were leading the charge against this diabolical movement. He wrote plenty of articles and columns on this. Indeed, he wrote a book in 1922 called, Eugenics and Other Evils: An Argument Against the Scientifically Organized State.

He is worth quoting from as I bring this piece to a close. In his book he rightly noted how social engineering is always preceded by verbal engineering:

Most Eugenists are Euphemists. I mean merely that short words startle them, while long words soothe them. And they are utterly incapable of translating the one into the other, however obviously they mean the same thing. Say to them “The persuasive and even coercive powers of the citizen should enable him to make sure that the burden of longevity in the previous generation does not become disproportionate and intolerable, especially to the females”; say this to them and they will sway slightly to and fro like babies sent to sleep in cradles. Say to them “Murder your mother,” and they sit up quite suddenly. Yet the two sentences, in cold logic, are exactly the same. Say to them “It is not improbable that a period may arrive when the narrow if once useful distinction between the anthropoid homo and the other animals, which has been modified on so many moral points, may be modified also even in regard to the important question of the extension of human diet”; say this to them, and beauty born of murmuring sound will pass into their face. But say to them, in a simple, manly, hearty way “Let’s eat a man!” and their surprise is quite surprising. Yet the sentences say just the same thing.

But even back in 1909 he had already been saying such things: “Eugenics seems to be quite as barbarous as cannibalism. If we have a right to mate and breed men and women like beasts, I cannot see why we should not cook and eat them like beasts. If a citizen may not settle what is to happen to his live body, why should he be allowed to be fastidious about what happens to his dead body?”

C. S. Lewis was also to deal with this in various places, including his brief 1947 essay on vivisection:

Once the old Christian idea of a total difference in kind between man and beast has been abandoned, then no argument for experiments on animals can be found which is not also an argument for experiments on inferior men. If we cut up beasts simply because they cannot prevent us and because we are backing our own side in the struggle for existence, it is only logical to cut up imbeciles, criminals, enemies, or capitalists for the same reasons.

So there were some important voices warning about all this in the early- and mid-20th Century. Too bad most of their words fell on deaf ears. We are now reaping the whirlwind of all this, and it only looks to be getting worse. Each new PP video expose only tells us more about what happens when we dethrone God and elevate humanity.

As Chesterton put it in Orthodoxy in 1908: “The secularists have not wrecked divine things; but the secularists have wrecked secular things, if that is any comfort to them. The Titans did not scale heaven; but they laid waste the world.”

Or as Malcolm Muggeridge put it some decades later: “When mortal men try to live without God, they infallibly succumb to megalomania or erotomania or both. The raised fist or the raised phallus; Nietzsche or D. H. Lawrence.”

We are witnessing both in massive quantities today, and the demonic activities of PP are only the tip of the iceberg.

10 Replies to “Eugenics, Planned Parenthood, and the Death of Civilisation”