This is the story that keeps on giving. Another video with more damning revelations about the butchers at Planned Parenthood has just been released. And it comes on the back of some good news here: a judge has ruled that the biotech firm StemExpress can’t block the Center for Medical Progress from releasing their videos. As one write-up states:

On Thursday afternoon, Alliance Defending Freedom issued a press release stating that a Superior Court of the State of California has rule in StemExpress v. The Center for Medical Progress, deciding the group has no rights to the materials produced by an undercover investigative journalist.
“People who don’t have anything to hide don’t go to court to stop journalists from reporting the truth,” said Freedom of Conscience Defense Fund President Chuck LiMandri. “The court was right to deny StemExpress’ request to gain access to damaging material against them obtained through solid investigative journalism.”
LiMandri explains exactly why. “Americans have the right to know the truth about Planned Parenthood’s sale of baby body parts and the ‘fiscal rewards’ Stem Express says that it provides to abortion clinics.” It is that right which StemExpress, Planned Parenthood, and their allies in the White House and elsewhere have attempted to deny. 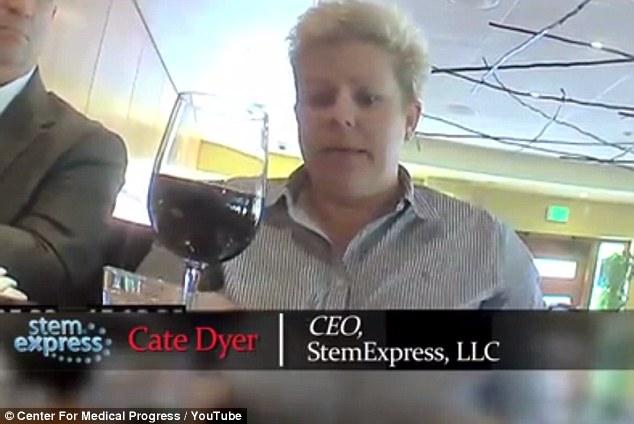 Following that ruling CMP was immediately back issuing another video. In the new video we hear StemExpress CEO Cate Dyer admitting – once again over wine and a nice meal – to shipping intact fetal cadavers, and even joking about all this:

1) StemExpress CEO Cate Dyer admits that StemExpress gets intact fetuses from the abortion clinics they work with shipped to their laboratory. “Case” is the clinical term for an individual abortion (cross reference with Planned Parenthood Senior Director of Medical Services Dr. Deborah Nucatola’s discussion of “this case, that case” in lunch video), so an “intact case” means an “intact abortion”:
SE: Realistically, if we were to do an agreement with you, what do we think you could get?
Buyer: Volume-wise?
SE: On specifically liver tissue, because that’s such an area of demand for us.
Buyer: So liver, and what about intact specimens, just—?
SE: Oh, yeah, I mean if you had intact cases, which we’ve done a lot, we sometimes ship those back to our lab in its entirety.
Buyer: Okay.
SE: So that would also be great if you guys have those.
Buyer: The entire case.
SE: Yeah, yeah. Because it’s just, and the procurement for us, I mean it can go really sideways, depending on the facility, and then our samples are destroyed, and we’re like, “Really?” This was all so much work, and then just to have them be destroyed is awful. I mean we have researchers wait forever, and they want certain things, you know, perfectly done, so we started bringing them back even to manage it from a procurement expert standpoint.

4) Cate Dyer laughs and jokes about researchers being squeamish about receiving baby parts in the mail:
SE: As you probably know, one of the issues with neural tissue, it’s so fragile. It’s insanely fragile. And I don’t even know—I was gonna say, I know we get requests for neural, it’s the hardest thing in the world to ship.
Buyer: You do it as the whole calvarium.
SE: Yeah, that’s the easiest way. And we’ve actually had good success with that.
Buyer: Make sure the eyes are closed!
SE: Yeah! [laughter] Tell the lab it’s coming!
Buyer: Yeah.
SE: They’ll open the box, go, ”Oh God!” [laughter] So yeah, so many of the academic labs cannot fly like that, they’re not capable.
Buyer: Why is that? I don’t understand that.
SE: It’s almost like they don’t want to know where it comes from. I can see that. Where they’re like, “We need limbs, but no hands and feet need to be attached.” And you’re like, ? Or they want long bones, and they want you to take it all off, like, make it so that we don’t know what it is.
Buyer: Bone the chicken for me and then we’ll—
SE: That’s it.
Buyer: And then I’ll eat it, but.
SE: But we know what it is. I mean, [laughter], but their lab.
Buyer: But then it goes to that whole stigma.
SE: Oh yeah. And their lab techs freak out, and have meltdowns, and so it’s just like, yeah. I think, quite frankly, that’s why a lot of researchers ultimately, some of them want to get into other things. They want to look at bone marrow, they want to look at adipose- sort of adult human, kind of adult based sampling. They want to avoid publishing a paper that says it was derived from fetal tissue.

Wow, more damning evidence about this diabolical group of baby killers. Meanwhile in America, Saturday August 22 will see protests against PP scheduled to take place right across the country. Over 300 such protests are planned. As one report states:

Tens of thousands of pro-life advocates are expected to protest at over 300 Planned Parenthood abortion business locations tomorrow in response to Planned Parenthood selling aborted babies and their body parts. After seven shocking videos catch top Planned Parenthood abortion practitioners arranging to sell aborted babies — and even dissecting one live baby — millions of pro-life people are up in arms.
Currently, there are over 300 cities in 47 states and 5 countries represented in the nationwide protest.
Organizers of the protests say they are the outgrowth of recently released Planned Parenthood expose videos showing the abortion company trafficking in aborted baby body parts and showing a complete disregard for women and unborn children.
Eric Scheidler of Pro-Life Action League told LifeNews: “These videos are exposing the American people to the truth about Planned Parenthood and the truth about abortion. How can you deny the humanity of a tiny person whose body parts are being harvested for medical use? Worse yet, how can you make jokes about it, like the Planned Parenthood doctors do in these videos? It’s time to cease all taxpayer funding of this corrupt organization.”

And you just gotta love Louisiana Governor Bobby Jindal. He is taking direct action to counter a PP rally in his state:

Way to go Bobby. The truth always hurts, and the more we get the truth out there as found on the videos, the better. One lie after another by the pro-aborts and PP is being exposed. Another lie is that PP is essential to help women and their health issues. One recent article exposed this porkie big time.

In my last link below we see how these clinics are broken down into various states. The graphics on both links make it clear that if PP closed tomorrow, women’s health needs would still be more than adequately looked after in the US. Another PP lie blown out of the water.

As I have said before, thank God for the Center for Medical Progress. They deserve a Congressional Medal of Honour, instead of the abuse and rejection they are getting from the Obama Administration. They are doing just what Wilberforce and the Clapham Sect did a few centuries ago regarding the murderous slave trade.

Both satanic movements involved making huge amounts of money out of depersonalised and dehumanised individuals: blacks and babies. Both abolitionist groups sought to defend human beings from such murderous agendas. Let the videos continue. And it is up to us to share this information far and wide.