It may be rather odd to speak about the soul of a nation, but I refer here to the religious and ideological makeup of this amazing nation-state, and how it might fare in years to come. It is a unique place in so many ways, including in its official self-definition. 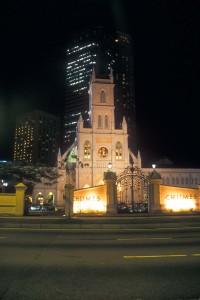 Simply put, it is both a modern secular state as well as a nation that prides itself in its multi-religious, multi-ethnic and multicultural makeup. It has in many ways achieved what many other nations have failed to do: a high degree of harmony, stability and unity, despite very different religious, racial and ethnic groups all living in the same small piece of territory.

It was Lee Kuan Yew’s aim to create such a state, and it can be said that he was quite successful indeed. It is certainly one of the most modern, prosperous, successful, safest and secure places in the world. The question is of course whether all that can last, especially with his passing earlier this year.

Various forces are already at work in taking Singapore in a more “progressive” direction – both politically and socially. Aims to liberalise the nation’s laws on homosexuality are of course one such example of this. A socially and culturally conservative place like this cannot forever remain immune from the powerful modernising forces of the West – both for good and for ill.

And how the nation’s Christians respond to the new challenges and the new winds which are blowing – or are trying to blow – will be a key part of how Singapore proceeds. Singapore currently has around 5.5 million people, and the religious mix (as of the 2010 census) is roughly this:
-Buddhists – over 30%
-Christians – 20%
-Muslims – 15%
-Other – 15%
-No religion – nearly 20%

So, how might these numbers look in the near future? A recent article highlighted a major study, The Future Of World Religions: Population Growth Projections, 2010-2050, released in April of this year. Among other things it said this:

In Singapore, Islam and Hinduism are projected to make the highest gains, with Muslims replacing Christians as the second-largest faith group by 2050….
The report also projected that the number of Muslims, a comparatively youthful population with high fertility rates, will nearly equal the number of Christians by 2050, if current demographic trends continue. As of 2010, Christians made up nearly a third of all 6.9 billion people on Earth. Muslims were the next largest group, comprising about 23 per cent.
The report projected Singapore’s total population to reach 7.9 million in 2050. The proportion of Muslims is projected to increase from 14.3 per cent in 2010 to 21.4 per cent in 2050, overtaking Christians as the second-largest group behind Buddhists. Over the same period, Singapore’s proportion of Hindus is expected to rise from 5.2 to 10.0 per cent. The report said the increases were “mostly because of migration from India and Malaysia”.
By 2050, freethinkers will make up 16 per cent of the total population, down slightly from 16.4 per cent in 2010. Over the same period, the proportion of Christians and Buddhists in Singapore will decrease from 18.2 to 17 per cent, and 33.9 to 27 per cent, respectively.
Commenting on the report, observers in Singapore questioned the assumption that migration patterns will continue over the next few decades.
Dr Mathew Mathews, a senior research fellow at the Institute of Policy Studies (IPS), pointed out that the Government had previously said it wanted to preserve the current racial balance. “Muslims and Hindus in Singapore usually are Malays and Indians, and if their racial composition is supposed to stay the same as currently, it will be unlikely that Islam and Hinduism in Singapore will grow substantially considering the current population plans,” he said.

Obviously as a Christian I am most interested in the Christian scene here. While the projected demographics are part of the equation, there are other factors to take into account concerning the future of Christianity in Singapore. My conversations with various Singaporeans is part of my assessment.

And I really should wait a few more days while I am here to write this piece, to get an even better feel for the faith situation. But my schedule gets very busy real soon, and this is my third visit within a year, so perhaps I can be allowed to offer at least some tentative words and initial observations.

I could make mention of the ornate church buildings immediately surrounding where I am staying. There is an old Methodist church just nearby, as well as a Presbyterian church (there are over 600 churches in Singapore). Of course what is happening inside is the real test of Christianity here, not just the buildings themselves.

There is even a Bible on my bedside table being proudly displayed, to my great delight. I immediately thought of a move by some angry atheists to ban Gideon Bibles from hotels and elsewhere in America: www.christianpost.com/news/atheist-group-gideon-bibles-hotel-149957/

The good news is, that sort of ugly secularism and strident misotheism is hardly to be found here in Singapore – at least not yet. Indeed, I had to readjust my thinking upon arrival here. I will be holding various meetings and giving various talks throughout the week, and was worried about protestors and so on, which I so often encounter in Australia.

But I forgot that here such protests are rare (they are largely proscribed), and to my great relief I should not have to run the gauntlet or be admitted to the venues I speak at with a police escort! So things are much different here in Singapore, and in many ways I think it is a good thing.

Sure, one can talk about the need of perhaps broadening political opposition, protests and free speech, etc., but that is a political discussion best left to the Singaporeans, and not to outsiders like myself. But let me finish with a quick reflection on the Christian state of play here.

As mentioned, there are plenty of churches around, including fine evangelical churches both big and small. I have had the honour of speaking at some of these, and will do so some more this week. I am continuously impressed with the Christians I meet, and always heartened by their faithful witness.

There are many terrific churches, many outstanding pastors, and many devout disciples of Christ. The church is in many ways vibrant, committed, and on fire. And many groups are actively working together. The Love Singapore movement for example has been going strong for 20 years now, and is a real encouragement and blessing to many: www.lovesingapore.org.sg/

Of course there are problems as well, as one would expect. Some of the megachurches can be guilty of proclaiming less than ideal gospel messages – or at least somewhat lopsided messages. And one large church has just had its pastor found guilty of misappropriating church funds – his sentencing will be handed out later this week.

Then there may be a somewhat lackadaisical approach to vital issues of the day. Partly this is because of somewhat strong government restrictions on radicalism of various kinds and so on, and also because many believers may think that the state can take care of the various issues, so the churches need not worry or get involved.

But as I will be sharing this week, there are many ominous cultural and social trends which have already wrought havoc in the West, and will undoubtedly be negatively impacting Singapore as well in the years ahead. How the church responds to these challenges depends on various factors.

One, it simply needs to be aware of the growing list of threats which soon enough will impact on Singapore and the churches. And it needs to wisely and circumspectly consider how it will proceed in days ahead as the current reign of tolerance and harmony begins to fray at the edges.

Christian churches may be pretty safe right now, but can the same be said about the future? And is the church in Singapore now seeking to develop a thoroughly biblical worldview, to address all the changes that are coming and will come to this land?

For example, Singapore is often leading the way with the new biomedical technologies, which raise various bioethical concerns. Government bioethics panels may be looking at some of these matters, but so too should be the church. And what happens if and when the restrictions on things like homosexuality weaken, if not disappear altogether?

Has the church thought through these matters? Is it prepared for what might lie ahead? Many more such questions can be asked. And Singaporean believers need to be grappling with these matters preferably ahead of time, instead of dealing with them when it may be too late, as has often been the case in the West.

Let me close with something I have said before. Back in 1978 Billy Graham held a five-day series of meetings here, and during that time he spoke of Singapore as being the “Antioch of Asia”. Was this a hope, a description, or a prophetic word?

I for one see Singapore as indeed fulfilling that role or calling, but it will take resolve, commitment, serious dedication, and real faithfulness to the Lord to make it a reality. Is the church in Singapore up to the task? I pray that it is.

4 Replies to “Whither Singapore’s Soul?”