An article written a year ago which was just one of many penned by me on a daily basis has turned out to be quite a showstopper. Indeed, the reaction was a big surprise to me, as I really did not expect it would turn out to be such a hot potato piece with so much interest generated.

Given that most of my articles may get a handful of responses, this one has gotten plenty, and continues to do so. I refer to my article, “On Leaving Church” which I posted on December 26, 2014. It has become by far my most read, most liked, most shared, and most commented-on article of all time. You can find it here: billmuehlenberg.com/2014/12/26/on-leaving-church/

Consider these statistics. Although the article has only been up for a year, it has had:
-over 426,000 views (the next most highly viewed article – on jihad in the West – has only 40,000)
-over 87,000 FB shares (that’s a lotta shares)
-294 tweets (whatever that means!)
-over 440 comments (with several hundred more, had people provided their full name as my commenting rules require)

Not bad for a small-time website like mine. These stats make it clear that this article has clearly been my most highly interacted-with article of all time. So it obviously struck a chord – or raw nerve – with many. Indeed, the numerous comments under the article – many by “dones” – were very revealing in so many ways. 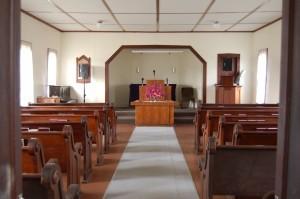 Obviously this is a massive issue and one which will not go away any time soon. So let me speak a bit more to all this. Of course entire libraries have been filled with books which discuss the issue of the church, what it is, what it means, what it is called to do, etc.

I certainly cannot enter into all of that here. Suffice it to say that there is the universal, invisible church, and there are local physical manifestations of the church wherever believers meet together to worship God, receive the teaching of the Word, partake of the sacraments, fellowship, and so on.

And even this minimalist description of what the church is and does will have some wanting to disagree in various areas. And disagreement aplenty can be seen in the hundreds of comments under my original article. That debate cannot here be resolved.

But let me state a few points. Some folks either did not read my article very carefully or misconstrued what I had to say. I never said that leaving church was just fine – I simply said it was happening and suggested some possible reasons as to why this might be so.

And I did clearly state that we must meet together for regular fellowship somewhere, somehow. I never advocated lone-wolf Christianity. Neither does the New Testament of course. We need each other and we are a Body of believers. It really is impossible to grow as a Christian without one another.

Let me offer just one quote here on this by John Stott from the preface to his commentary on Ephesians. There he eloquently speaks about the importance of the church:

One of our chief evangelical blind spots has been to overlook the central importance of the church. We tend to proclaim individual salvation without moving on to the saved community. We emphasize that Christ died for us ‘to redeem us from all iniquity’ rather than ‘to purify for himself a people of his own’. We think of ourselves more as ‘Christians’ than as ‘churchmen’, and our message is more good news of a new life than of a new society.
Nobody can emerge from a careful reading of Paul’s letter to the Ephesians with a privatized gospel. For Ephesians is the gospel of the church. It sets forth God’s eternal purpose to create through Jesus Christ a new society which stands out in bright relief against the sombre background of the old world. For God’s new society is characterized by life in place of death, by unity and reconciliation in place of division and alienation, by the wholesome standards of righteousness in place of the corruption of wickedness, by love and peace in place of hatred and strife, and by unremitting conflict with evil in place of a flabby compromise with it.

Amen to that. Let me share a few more thoughts that other writers have offered in recent months on the matter of “dones”. Not only are plenty of articles being penned on this subject, but entire books now exist as well. Just one worth noting is this: Josh Packard and Ashleigh Hope, Church Refugees: Sociologists Reveal Why People Are DONE With Church But Not Their Faith (Group Publishing, 2015).

As one write-up about this research which I quoted in my first article says, “Will the Dones return? Not likely, according to the research. They’re done. Packard says it would be more fruitful if churches would focus on not losing these people in the first place. Preventing an exodus is far easier than attempting to convince refugees to return.”

Felicity Dale, also commenting on the research of Packard, ends her article on this subject this way:

While the Dones are not going back to the institutional church no matter how much it is “tweaked”, most of them have not abandoned God. In fact, some say that they have left “the church” to preserve their faith. And, the kind of church they are interested in looks surprisingly like the church portrayed in the book of Acts. Here are some of the characteristics of that church:
-All the churches in the Bible met in a home and functioned like a small spiritual family. The current institutional church, by contrast, spends a great deal of energy and money getting and maintaining a church building.
-The churches in the Bible were simple. We describe “simple church” as a way of being/doing church where any believer could say, “I could do that!” (“they were astonished that Peter and John were unschooled, ordinary men” (Acts 4:13).) The institutional church, by contrast, requires highly educated, highly schooled (seminary, etc.) highly creative people to be successful. (Think Rick Warren, for instance.)
-In the New Testament (NT) churches, everyone used their gifts. In institutional church, only a few, highly gifted people (worship leaders, preachers, etc.) use their gifts.
-In NT church, Jesus brought the agenda for the meetings. In institutional churches, a few, very smart people design the worship experiences.
-In the NT, churches were started in a few hours or a few days. Institutional churches require a great deal of planning and resources and take months or years to start.

Now all this can likely open up other cans of worms. I am not here to jump on the “let’s attack the institutional church” bandwagon. Plenty of others are already doing this, and I believe their thoughts can be a mixed bag. Indeed, as was to be expected, in the comments under my first article much was made of this.

This included those who mentioned, if not promoted, books like Pagan Christianity? (Frank Viola and George Barna, 2008). My intent is not to enter into that discussion again. Suffice it to say that whenever this particular volume is mentioned, I usually refer folks to an excellent, even-handed and nuanced review of it by New Testament scholar Ben Witherington: benwitherington.blogspot.com.au/2008/06/pagan-christianty-by-george-barna-and.html

Perhaps if these sorts of issues were discussed more often in our churches (along of course with solid biblical preaching and teaching), we might have fewer people leaving. I am not calling here for some trendy “relevance”. Being worldly, carnal and compromised is obviously not a relevance I can support. But being relevant by speaking to some of the key moral and social issues of the day is I think quite different, and much-needed.

But much more must be said about the “dones” phenomenon. As to what can be done about all this (no pun intended), well, that is the stuff of another few articles, if not books! But some folks are making various proposals. Jon Nielson for example addresses this at least backhandedly in his article, “3 Common Traits of Youth Who Don’t Leave the Church”. Briefly, these are
1. They are converted.
2. They have been equipped, not entertained.
3. Their parents preached the gospel to them.

In that sense, prevention is certainly better than cure. If we are properly discipling people – including making sure they are genuinely converted in the first place – that would perhaps go a long way in cutting the number of “dones”. Many other suggestions could be offered here of course.

So forgive me already if I have again simply raised questions without giving much-desired solid answers! I confess to not having all the answers. I am not sure if anyone does. It is one thing to see a problem, and offer some possible reasons as to why that problem is happening. It is another matter to come up with clear answers and solutions to these problems.

But this is an ongoing conversation. My first article generated a huge response, and who knows, this one might as well. But at least we can have a discussion about all this. Indeed, we must talk about it. Simply doing church as usual without seriously and prayerfully reflecting on these problems will likely help no one.

At the end of the day all the research and polling and surveys and sociological analysis has a place in all this. But I would tend to want to fall back on more sobering and more likely realities: perhaps so many are leaving church because God no longer seems to be there. As another commentator said about more Barna polling:

Last century one powerful prophetic voice offered us a simple yet profound analysis of all this. He would have little time for surveys and sociological assessments. I quoted this in my first article, but it is worth ending with again. This is what A. W. Tozer put our problem down to:

36 Replies to “On Leaving Church, Revisited”