In Leviticus 10:1-3 we find the story of the death of Nadab and Abihu, which is puzzling and troubling to many contemporary believers. God struck these priests down for offering “strange fire” as the KJV puts it. The difficulty here seems to be a rather harsh punishment for what may seem to be a rather minor issue. This is how we find the story as presented in the NIV:

Aaron’s sons Nadab and Abihu took their censers, put fire in them and added incense; and they offered unauthorized fire before the Lord, contrary to his command. So fire came out from the presence of the Lord and consumed them, and they died before the Lord. Moses then said to Aaron, “This is what the Lord spoke of when he said:
‘Am 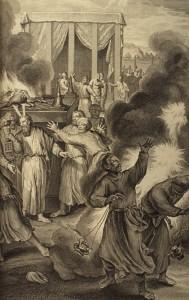 ong those who approach me
I will be proved holy;
in the sight of all the people
I will be honored’.”

It is clear that the sin of the pair was disobedience to God: they did that which was “contrary to his command”. But was instant death warranted for this? Several things can be said here. Firstly, what exactly was the disobedience? It is not immediately clear what the specific sin was.

But it seems clear that they brought in fire from a strange or foreign place (a pagan shrine perhaps, or maybe just a common fire). The fire was supposed to come from the high altar (Lev. 16:12), fire which the Lord had just lit (Lev. 9:24). We are also not told why they took this unauthorised fire, or what their motivation was.

As R. K. Harrison remarks, their “actions may have resulted from pride, ambition, jealousy or impatience, and if so their motivation was very far removed from the intent of one trying to lead a life of holiness to the Lord.”. And verse 9 might indicate drunkenness on their part as well.

But as priests ministering before the Lord, they were in a very privileged, high, and holy position, one which demanded utmost obedience, even in the fine details. As Roy Gane comments:

Exacerbating the vulnerability of the Aaronic priesthood, Nadab and Abihu died under divine judgment. The gravity of their offense was magnified by the loftiness of their privilege. As Aaron’s oldest sons (cf. Num. 3:2), their position of religious leadership was just behind Moses and Aaron. If anyone had reason for reverential care toward God and his sancta, it was Nadab and Abihu. Not only had they witnessed the divine glory at Mount Sinai, which “looked like a consuming fire on top of the mountain” (Ex. 24:17; cf. Deut. 5:22), but with an elite group of leaders they also shared the awe-inspiring experience of approaching and seeing the God of Israel (Ex. 24:1, 9-11).

Or as Derek Tidball puts it:

Scripture speaks with a united voice: the closer one is to God, the more careful one must be about his holiness and honour; the greater the privileges one has received, the more careful one must be to fulfil one’s responsibilities. As Jesus warned, ‘From everyone who has been given much, much will be demanded; and from the one who has been entrusted with much, much more will be asked.’ Being close to God confers enormous benefits but, at the same time, places one in a position of danger, as the priests discovered. For all the grace God provides, he still requires prompt and exact obedience from his servants.

One must also note the glaring contrast of what we read about in Lev. 9 with what we find here. At the end of ch. 9 (verses 23-24), we read about the great joy the people had because of God’s manifest presence: “Moses and Aaron then went into the tent of meeting. When they came out, they blessed the people; and the glory of the Lord appeared to all the people. Fire came out from the presence of the Lord and consumed the burnt offering and the fat portions on the altar. And when all the people saw it, they shouted for joy and fell face down.”

But immediately following this we read about more fire coming down from the Lord, this time in dramatic and swift judgment. On the issue of divine judgment, Gordon Wenham has some incisive words to share with us:

Tragedy and triumph go hand in hand in the Bible and in life. On the very first day of Aaron’s high-priestly ministry his two eldest sons died for infringing God’s law. In the life of our Lord his baptism by the Spirit was followed by temptation in the wilderness, his triumphal entry into Jerusalem by his crucifixion six days later. In the early Church the healing of the lame man was succeeded by the death of Ananias and Sapphira (Acts 3-5).
These glaring contrasts are upsetting to the cozy bourgeois attitudes that often pass for Christian. In many parts of the Church the biblical view of divine judgment is conveniently forgotten or supposed to be something that passed away with the OT. Heine’s famous last words, “God will forgive me. That’s his job,” have become the unexpressed axiom of much modern theology. This short story is therefore an affront to liberal thinkers. It should also challenge Bible-believing Christians whose theological attitudes are influenced by prevailing trends of thought more often than they realize.

Consider the first one of these episodes. As John Hartley comments:

The incident of Nadab and Abihu has some parallel to the death of Ananias and Sapphira (Acts 5:1-11). Both parties instantly died in the presence of God. Both accounts are recounted at the inception of a covenant between God and his people. These accounts serve as a warning that all who are members of the covenant community serve the Holy God. They cannot lie to him or worship him in a way that is improper. There can be no deception or manipulation in serving God.

Finally, we must properly understand who God is and the propriety of his response here. We must not think of God as being temperamental, vindictive and over-reacting. His judgment was fully just, and fully called for. As Jay Sklar writes,

This was not the capricious response of a quick-tempered deity. Rather, it was meant to underscore to the Israelites his holy hatred of sin, and also to alert them to the presence of evil in their midst, so that they could address it properly and maintain life-giving fellowship with him. Naturally, once the situation had been addressed, the Lord’s presence would return, and the Israelites would again enjoy his favour (cf. Josh. 7:16-26 with Josh. 8). But this verse stands as a strong reminder to the priests of the great responsibility they bear as the people’s leaders. When a captain makes a mistake, the entire ship is endangered.

If this story is troubling to contemporary Christians, it is because we no longer have a realistic and biblical sense of sin and its seriousness. Furthermore, we do not have a proper understanding of who God is, especially his holiness, purity and awesomeness. Let it serve as a proper warning to all of us, especially those in leadership positions in the house of God.