Yet increasingly these lines are being blurred by people who claim to be Christian. They insist they are disciples of Christ, but when you get down to brass tacks, it is all about me, me, me. Their entire life is consumed with self, not with Christ. Their entire focus is on self. Everything revolves around them.

This is bad enough, but now we even have mega-preachers who have this as the very heart of their message. How many big cheese preachers like Joel Osteen offer us nothing but me, me, me. It is all about having your best life now, having a good self-image, being successful, wealthy and happy.

When you couple this me-first gospel with the spirit of the age, and what it currently is promoting, you get real bad outcomes. Take for example the various radical sexual agendas which have utterly swamped the West over the past 50 years. Pair this with a selfish man-centred gospel and you’re asking for real trouble. And that is just what we find over and over again.

Consider a major religious story making the rounds right now. Let me quote from it, and you tell me what you think about it:

To my fans and friends:
Most of us reach at least one pivotal moment in our lives that better defines who we are. These last several months have been the hardest – but have also ended up being the most freeing months – of my life. To make an extremely long story short, I have come to be able to admit to myself, and to my family, that I am attracted to children….
I am never going to be able to change how I am, and no matter how healthy our relationship becomes, it’s never going to change what I know deep down: that I am attracted to children….
I know I have a long way to go. But if this honesty with myself about who I am, and who I was made by God to be, doesn’t constitute as the peace that passes all understanding, then I don’t know what does. It is like this weight I have been carrying my whole life has been lifted from me, and I have never felt such freedom.
In sharing this publicly I’m taking another step into health and wholeness by accepting myself, and every part of me. It’s not only an idea for me that I’m attracted to children; It’s my life. This is me being authentic and real with myself and other people. This is a part of who I am.
I hope people will hear my heart, and that I will still be loved. I’m still the same guy, with the same heart, who wants to love God and love people with everything I have. This is a part of me I have come to be able to accept, and now it is a part of me that you know as well. I trust God to help love do the rest. 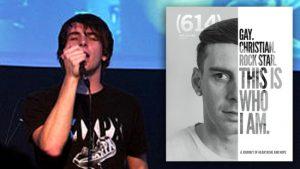 If the above story incensed you, you should be incensed. But it is not entirely accurate. The above story is completely true except for one small component. The person who said these very words said it about being attracted to other men, not to children. So does this change anything? Are you still incensed? Or does the fact that homosexuality is being discussed here make you much more sympathetic to the guy?

The person in question is Trey Pearson, a Christian rocker. His story is even being told – and celebrated – in various secular American newspapers. One begins this way:

As Trey Pearson toured all 50 states as a Christian rock star, he shared some of his truth – his faith in the Gospel – but not all of it. Pearson never told anyone – his fans, his conservative Christian family, his wife – that he was gay. Until now. “I never wanted to be gay. I was scared of what God would think and what all of these people I loved would think about me,” the 35-year-old singer wrote in a letter to his fans that was first published by Religion News Service on Tuesday…
As the lead singer for the Christian rock group Everyday Sunday, Pearson is taking a risk by coming out. The band that he started has released several successful albums, including 2009’s “Best Night of Our Lives,” which not only did well on the Christian charts but also broke onto the Billboard Top 200.

And what I quoted above are the very words of Trey, except I changed the bit about his attraction to other men to an attraction for children. No, I am not saying that homosexuality and paedophilia are identical. What I am saying is that we are told that in both cases this is something you are born with, it is not a choice, and you must just accept it and embrace it. Yes they are saying this about paedophilia as well.

In both versions of the story I offer above, one key point stands out: this is all about self. Trey is saying look at me, at me, at me. It is all about him. There is nothing here in his letter to his fans about the liberating Christ, the clear teachings of Scripture, a holy God, and why Christ came: to set people free and transform their lives.

All that is completely absent here. Instead it is entirely focused on Trey. And he assures us that he absolutely cannot change and this is who he is. No, what he really is saying is he does not want to change. Sure, he may have tried to change, and he may have paid lip service to the gospel, but the moment you insist that you cannot change and you must remain in a condition which Scripture everywhere declares to be sinful, then you are shaking your fist at God.

You are saying God is wrong, the Bible is full of errors, and I, Trey, am totally right here. He has taken his own fallible and finite personal experience and feelings and elevated them above everything else, including Christ and the Word of God. This is a very dangerous place to be in.

While plenty of clueless, gullible and biblically illiterate believers will fall for this, everything about his letter is wrong – and from the pit of hell: God made me this way; this is who I am; I cannot change, etc. No God did not make you that way; no that is not who you are; and yes you can change.

But as I said, we live in an age in which it is all about me. And we live in an age which has bought holus bolus the entire diabolical deception of the homosexual agenda. So guys like Trey have fallen for it hook, line and sinker. Of course he is not alone in this – not by any means.

The gospel of self has enslaved millions. And the dead end and high risk homosexual lifestyle has seduced many. As to Christian singers, celebrities and personalities, there have been a whole bunch of these folks who have caved in and bought the ‘I am homosexual and cannot change’ lie. And they have publicly championed this rebellion. See here for more of these folks: billmuehlenberg.com/2014/08/17/a-great-way-to-destroy-the-faith-of-millions/

What he has done certainly should not be endorsed or praised or celebrated. His false testimony which tells us that God in fact is NOT in the change business will simply harm countless others who will be led to believe that homosexuality is innate, set in concrete, and unalterable. They will be abandoned to hell on earth and hell in the next life if they buy that lie.

The many who have left the homosexual lifestyle know that this is indeed a cruel lie. And anyone who believes the Word of God and not the counsel of despair of mere men knows this is a lie as well.

21 Replies to “It’s All About Me: Another Christian Celeb Bites the Dust”