Millions of Christians worldwide would be familiar with My Utmost for His Highest. The book of daily devotionals was compiled by the wife of Oswald Chambers from various sources and has been continuously in print since first published in 1927.

But many may not know all that much about the man himself. His story is well worth telling, and here in outline form I present some of the vital details. He was born into a godly family (his father was a Baptist minister) in 1874 in Aberdeen, Scotland, and was known for his devout Christian life as a teenager.

He was a gifte 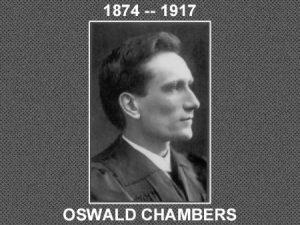 d artist and musician, and studied art from 1893-1897, but soon afterward he felt called to the ministry, and joined Dunoon, a small theological training school near Glasgow where he was a student then a tutor. During his time there he taught various classes, including philosophy.

He took teaching trips to the US and Japan, and while on an American trip he met Gertrude Hobbs whom he married in May 1910. Her skills at shorthand were invaluable, including making My Utmost possible for publication years later.

Between 1911 and 1915 he founded and was the principal of the Bible Training College in London. But with the outbreak of the war he took leave from his teaching duties and became a YMCA chaplain, serving overseas. He ministered to Australian and New Zealand troops in Cairo, Egypt in this capacity, but was stricken with appendicitis.

He underwent an emergency appendectomy, but complications from the operation resulted in his death several weeks later. He was buried with full military honours in Cairo. His wife stayed on for two more years then returned to the UK.

She used the notes she had taken in shorthand of his various lectures of his last six years to produce the daily devotional, My Utmost and other books. More on this in a moment.

Our main biography of this great man is by David McCasland: Oswald Chambers: Abandoned To God (1993). The 350-page volume does a good job of covering this great saint’s brief 43 years. In it we learn much about this mighty man of God. Let me highlight in detail just one important episode in his life.

One worth recounting which is common to many great men and women of God is a dark night of the soul he underwent at the turn of the century. It was a very tough period which he later described as “four years of hell on earth.” A poem written in September 1901 reveals the depth of his struggle:

O Lord Jesus, hear my crying
For a consecrated life,
For I bite the dust in trying
For release from this dark strife.

This four years of spiritual turmoil happened during his first four years at Dunoon. It began when Dr. F. B. Meyer came there to speak about the Holy Spirit and having the fullness of God. Says Chambers about this event:

From that day on for four years, nothing but the overruling grace of God and the kindness of friends kept me out of an asylum. God used me during those years for the conversion of souls, but I had no conscious communion with Him. The Bible was the dullest, most uninteresting book in existence, and the sense of depravity, the vileness and bad-motivedness of my nature was terrific.

Others felt he was an exemplary Christian during this period, but he was in the depth of despair. He had already given up his love of art and now he renounced of love of a woman he was in relationship with for eight years. He battled with pride and a sense of his own overwhelming sinfulness.

He says the breakthrough came when “Luke 11:13 got hold of me – ‘If ye then, being evil, know how to give good gifts to your children, how much more shall your heavenly Father give the Holy Spirit to them that ask Him?’” This crisis of full surrender happened in 1901 when he was 27 years old.

As he put it, “Either Christianity is a downright fraud, or I have not got hold of the right end of the stick.’ And then and there I claimed the gift of the Holy Spirit in dogged committal to Luke 11:13.” Thus ended his long, dark night of the soul, and he moved forward in new and powerful ministry for Christ.

As McCasland puts it, “He was no ‘church window’ saint, that is the last thing he would have desired to be – very real and human; not faultless, but blameless, a true knight of God, obedient to death, laying his ‘Isaac’ unquestioningly on the altar. To such is given the Crown of Life.”

Giving up a career in art and giving up his first romantic love was part of the price he had to pay. But meeting his eventual life partner Gertrude was a Godsend indeed. It was her shorthand that took down so much of what Chambers has said, taught and preached, and became the stuff of numerous books, including his famous devotional.

As she put it in the forward of the great book, “A large proportion of the readings have been chosen from the talks given during the Devotional Hour at the [Bible Training] College – an hour which for many students marked an epoch in their life with God.”

She continues, “It is because it is felt that the author is one to whose teaching men will return, that this book has been prepared, and it is sent out with the prayer that day by day the messages may continue to bring the quickening life and inspiration of the Holy Spirit.”

Let me finish with just one of his 365 daily devotionals, selected at random, from September 1. It is based on 1 Peter 1:16 and says:

Continually restate to yourself what the purpose of your life is. The destined end of man is not happiness, nor health, but holiness. Nowadays we have far too many affinities, we are dissipated with them; right, good, noble affinities which will yet have their fulfilment, but in the meantime God has to atrophy them. The one thing that matters is whether a man will accept the God Who will make him holy. At all costs a man must be rightly related to God.
Do I believe I need to be holy? Do I believe God can come into me and make me holy? If by your preaching you convince me that I am unholy, I resent your preaching. The preaching of the gospel awakens an intense resentment because it must reveal that I am unholy; but it also awakens an intense craving. God has one destined end for mankind, viz., holiness. His one aim is the production of saints. God is not an eternal blessing-machine for men; He did not come to save men out of pity: He came to save men because He had created them to be holy. The Atonement means that God can put me back into perfect union with Himself, without a shadow between, through the Death of Jesus Christ.
Never tolerate through sympathy with yourself or with others any practice that is not in keeping with a holy God. Holiness means unsullied walking with the feet, unsullied talking with the tongue, unsullied thinking with the mind — every detail of the life under the scrutiny of God. Holiness is not only what God gives me, but what I manifest that God has given me.