Brexit was a stunning victory for liberty, independence and self-control, at least for the UK, and it may well be the first shot fired in a new revolution of freedom. Already a number of other European nations are talking about referendums on getting out of the EU. Good.

And while we are at it, it is time to pull out of other radical secular left globalist bodies that do far more harm than good. These transnational bodies are often a law unto themselves, with no accountability or responsibility to ordinary citizens. 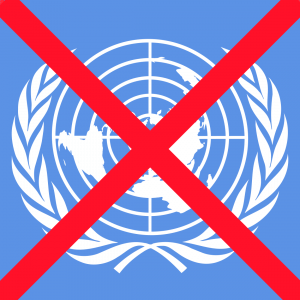 The biggest and baddest example of this is of course the United Nations. The UN is well past its use-by date, and it is time for all concerned nations to pull out now. And if there is any doubt about this, all you have to do is look at what the UN has just recommended re the UK.

For example, let me offer you how the British Humanist Association has covered the UN report. It has a piece on this which begins:

The United Nations Committee on the Rights of the Child has today published its major periodic review of the state of children’s rights in the UK, and has advocated for:
-the repeal of compulsory collective worship in UK schools
-a fully integrated education system in Northern Ireland
-full and comprehensive sex and relationships education in UK schools
-decriminalisation of abortion in Northern Ireland in all circumstances.
The British Humanist Association (BHA) has long campaigned for such changes, having secured similar recommendations in the civil society report that fed into the review. The BHA was on the working group that produced the education section of that report. Today it has welcomed the UN Committee on the Rights of the Child making the same recommendations.

It offers more detail of each of these four proposals, quoting from the UN. Here are the final two:

-On sex and relationships education: ‘Relationships and sexuality education is not mandatory in all schools, its contents and quality varies depending on the school, and LGBT children do not have access to accurate information on their sexuality. The Committee recommends that the State party ensure that meaningful sexual and reproductive health education is part of the mandatory school curriculum for all schools, including academies, special schools and youth detention centres, in all areas of the State party. Such education should provide age-appropriate information on: confidential sexual and reproductive health-care services; contraceptives; prevention of sexual abuse or exploitation, including sexual bullying; available support in cases of such abuse and exploitation; and sexuality, including that of LGBT children’.
-On abortion in Northern Ireland: ‘In Northern Ireland, abortion is illegal in all cases except where continuance of the pregnancy threatens the life of the mother, and is sanctioned with life imprisonment. The Committee recommends that the State party decriminalize abortion in Northern Ireland in all circumstances and review its legislation with a view to ensuring girls’ access to safe abortion and post-abortion care services. The views of the child should always be heard and respected in abortion decisions.’

All this is scary stuff indeed: more secular left Big Brother activism being foisted upon ordinary citizens, whether they like it or not. The Christian Institute in the UK especially expressed concern about the recommendations on children and Christian worship. It quickly released this statement:

Asking children to attend Christian assemblies undermines their human rights, according to a United Nations committee. A highly controversial new report by the UN Committee on the Rights of the Child expresses ‘concern’ that pupils in the UK are legally required to take part in a daily act of collective worship, which is “wholly or mainly of a broadly Christian character”. Conservative MP David Burrowes described the criticism as “ludicrous” and said the Government can “respectfully put those kind of reports in the bin where they belong”.
Worship
The committee recommended that the Government “repeal legal provisions for compulsory attendance at collective worship”. Its recommendations are not legally binding. Parents can already withdraw their children from collective worship but the committee wants children to be able to act independently of their parents. Speaking to The Telegraph, David Burrowes said: “The collective act of worship is not an indoctrination exercise. It is recognising and respecting the Christian heritage of the country and giving people an opportunity to reflect”.
Not indoctrination
“The UN should spend more time doing its main job of preventing war and genocide rather than poking its nose in other countries’ classrooms.” According to Article 43 of the Convention on the Rights of the Child, the committee is to consist of “eighteen experts of high moral standing and recognized competence” in the field of human rights. It currently includes representatives from Bahrain, Egypt and Russia. The report contained 150 recommendations on where Britain could be contravening the UN’s charter on the Rights of the Child, including the freedom of parents to reasonably chastise their children.

Yes Christians have every right to be greatly concerned about this social engineering agenda of the UN. It is about enforcing secular humanism and taking away the rights of Christian parents, shutting down free speech, and stifling religious liberty.

8 Replies to “Time to Exit the UN”