Just when you thought things could not get any more bizarre and perverse at the Gosford Anglican Church with its hyper-leftist leader Rod Bower, it just has. This is one of the crazier – yet sadly still typical – things to come from the mouth of this radical activist who regularly rubbishes the name of Christ and trashes the gospel. 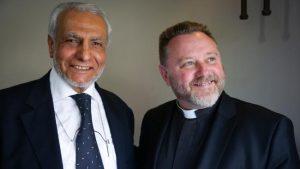 Bower has regularly championed all things homosexual while trashing biblical Christians on this issue. And he has also regularly pushed all things Muslim while regularly bashing those faithful believers concerned about false religions, sharia law, and jihadist terrorism.

But now the two are in blatant conflict, so what will Bower do? Well, here we have an anti-homosexual Muslim now being defended by the uber-left Bower. Mind-blowing! The story should be coming straight out of an episode of the Twilight Zone, or found in a Looney Tunes cartoon, but is instead reported today in our national newspaper. It begins this way:

Social media star and Anglican Church activist Rod Bowers, who has described the national plebiscite on same-sex marriage as a “hateful” platform for abuse, has defended the Grand Mufti who has called gay people sexual perverts.
The Gosford Anglican Church priest, famous for posting progressive slogans in support of marriage equality, asylum-seekers and other vulnerable groups on his church billboard, said it was necessary to “have deep affections” for people with whom you disagree. “Many religions have ancient and venerable texts that instruct how we live our lives, but also we have to understand they are written in a historical context,” he said.
The nation’s top-ranking Sunni Islam scholar Ibrahim Abu Mohammed, elected to the position of Grand Mufti in 2011, has attacked critics of his colleagues on the national imams council because they disagree with the -religion’s “longstanding” position on homosexuality. Sheik Shady Alsuleiman has called homosexuality an “evil act” that spreads “diseases” while another member of the executive said the Islamic punishment for gay acts was death.
Father Bowers said it was “not easy” to reconcile his progressive activism and his friendship with the Grand Mufti, to whom he wrote on Wednesday expressing solidarity after a car was firebombed outside a Perth mosque. “We can’t be the thought police; that cannot be the sort of country that we live in,” he said.

Well there you have it folks – you just cannot make this stuff up! In the world of out and proud apostates like Bower, the one true God of the Bible has been replaced with a god made in their own secular leftist image. Instead of absolute truth and universal morality, we have an ever shifting and sinking set of values, dependent on the latest worldly agendas.

So instead of biblical absolutes we are left with political shifting sands and politically correct expediency. Hmm, how do I keep all my Muslim pals happy while also keeping my homosexual buddies happy? It is all about keeping various radical left agendas in play, no matter how contradictory and how hypocritical.

This is the feet-planted-firmly–in-the clouds worldview of trendy lefties like Bower. And of course we could spend time here pulling apart all the nonsense, baloney and falsehoods found in this short article. For example, we ‘can’t be the thought police’?

Is that what you really believe Rod? Then why is it that every time a conservative dares to come to your social pages to give an alternate point of view you delete those comments and ban those commentators? Sounds like policing thought to me Rod.

Only trendy progressive leftist thought is allowed at your place it seems. And of course Bower goes on in this article to warn about the dangers of “radicalised Christianity” as he has done before! Recall the words recently found on his church billboard: “We denounce extreme radicalised Christians”.

Oh really? You mean you know of Christians blowing up airports, throwing homosexuals off tall buildings, and targeting infidels? I am not aware of any of these. But Rod seems to think they are all over the place. The truth is, a radical Christian is a normal Christian: he takes seriously what is found in the Word of God, he obeys it, and does not make up morality and theology as he goes along.

The “radical Christian” knows that Islam is a false and deceptive religion, he knows that homosexuality is a sinful and dangerous lifestyle, and he knows that marriage as God designed it is between one man and one woman. It is all about believing God and obeying his Word.

And the radical Muslim is a normal Muslim. He takes seriously the life, actions and teachings of Muhammad, the dictates of the Koran and the hadith, and is willing to die for his faith. He fully believes his prophet and his holy writings when he is commanded to kill the infidel.

He is determined to see a universal caliphate established, with everyone bowing to Allah and submitting to sharia law. This is normal Islamic life. But in the 99 shades of grey world of Bower, a world in which there is no black and white, anything goes.

Above all we must make Muslims and homosexuals victims. And when the two victim groups clash and conflict, well, things can get a bit awkward, but the main thing is to keep pushing the leftist narrative, no matter how bizarre and contradictory.

But since when does logical consistency ever mean much in the minds of the radical left? The loony left always makes for strange bedfellows, so jumping into bed with Muslims one day, and into bed with homosexuals the next day, is no biggee for these folks.

As long as Rod can shake his fist at God and his Word, and be the darling of the secular left media, he will keep on pushing every radical agenda item, no matter how much of a hypocrite he becomes in the process. However he will one day stand before the true and living God and give an account. I will not want to be in his shoes.

We can keep praying for him that he repents and becomes a Christian. And we must pray for those folks who still roll up to his church each week. They too need to meet the living God, and reject the false gods of leftism, homosexualism, and Islam. Lord have mercy.