This will do the heads in of the progressives – both secular and religious. Discrimination and love in the same phrase? You betcha. Despite what the secularists and the trendy lefty Christians will tell you, God certainly loves, but his love is certainly discriminating. 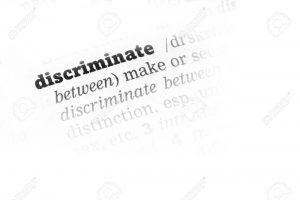 Everyone discriminates every day of their lives. When you marry one person and not all the others, you have shown discrimination. When you put on blue socks instead of black socks you discriminate. When you choose a hot dog over a hamburger at a fast food place you have been involved in an act of discrimination.

And God fully discriminates all the time as well. He gives grace to the humble but resists the proud. He chooses Israel over all the nations of the earth. He gives eternal life to those who come to Christ in repentance and faith, but his wrath remains on the unrepentant. He chooses Jacob over Esau. And so on.

11 For as high as the heavens are above the earth,
so great is his love for those who fear him;

17 But from everlasting to everlasting
the Lord’s love is with those who fear him,

Those who fear him are the objects of his love. Not everyone indiscriminately. There is a necessary condition for his people to receive his love: reverence, fear, obedience. As Leslie Allen comments:

Take heed, warns the psalmist: this love is not to be wilfully abused. Its recipients must respond with respectful awe, vv 11, 13, 17. Yahweh lives up to his name on behalf of those who keep the requirements of his covenant. The activity of God, v 6, must find an echo of obedient activity in their lives. His mindfulness, v 14, calls for a corresponding mindfulness from his people. Love is essentially a two-way relationship of obligation.

Other passages which express similar thoughts would include the following:

The love and favour of God is really in many respects dependent on how we respond. Things are the same in the New Testament as just a few more passages make clear:

-John 15:10 If you keep my commands, you will remain in my love, just as I have kept my Father’s commands and remain in his love.
-1 John 2:15 Do not love the world or anything in the world. If anyone loves the world, love for the Father is not in them.

Again we find the idea of having and remaining in God’s love dependent on the sorts of lives we are living – in this case, a life of obedience and of not loving the world. Of course anyone with a little theological awareness will realise that all this is in fact part of several much larger and hotly discussed debates, dealing with concepts such as divine election and predestination, the possibility of losing one’s salvation, and so on.

I do not here want to enter into those massive and theologically complex debates. They would require a number of articles just to properly introduce the issues, and that is not what I am seeking to do here. Suffice it to say that when it comes to concepts like divine choice, election, and related themes, they are fully biblical.

How exactly we are to understand them is another matter of course. And that is where all the hot and heavy debates arise. But let me get back to the concept of discriminating divine love. An article on the love of God by John MacArthur may be worth drawing upon here – although it will seem controversial to some. He writes:

An important distinction must be made: God loves believers with a particular love. God’s love for the elect is an infinite, eternal, saving love. We know from Scripture that this great love was the very cause of our election (Ephesians 2:4). Such love clearly is not directed toward all of mankind indiscriminately, but is bestowed uniquely and individually on those whom God chose in eternity past.
But from that, it does not follow that God’s attitude toward those He did not elect must be unmitigated hatred. Surely His pleading with the lost, His offers of mercy to the reprobate, and the call of the gospel to all who hear are all sincere expressions of the heart of a loving God. Remember, He has no pleasure in the death of the wicked, but tenderly calls sinners to turn from their evil ways and live….
Both God’s wrath and His love work to the same ultimate end — His glory. God is glorified in the condemnation of the wicked; He is glorified in every expression of love for all people without exception; and He is glorified in the particular love He manifests in saving His people.
Expressions of wrath and expressions of love — all are necessary to display God’s full glory. We must never ignore any aspect of His character, nor magnify one to the exclusion of another. When we commit those errors, we throw off the biblical balance, distort the true nature of God, and diminish His real glory.
Does God so love the world? Emphatically — yes! Proclaim that truth far and wide, and do so against the backdrop of God’s perfect wrath that awaits everyone who does not repent and turn to Christ.
Does the love of God differ in the breadth and depth and manner of its expression? Yes it does. Praise Him for the many manifestations of His love, especially toward the non-elect, and rejoice in the particular manifestation of His saving love for you who believe. God has chosen to display in you the glory of His redeeming grace.

Of course even this quote will be a can of worms to many folks, and again, it is part of some much bigger biblical discussion. My preference is to try to give some grounding for these matters in further articles before agitated debate breaks out over them here.

But returning to my initial theme: the love of God is indeed a discriminating love. The biblical material seems rather clear on this. Yes, many questions arise when seeking to comprehend all this, and believers will have to agree to disagree with many points along the way.

Perhaps just to round things off, let me make this suggestion. For those who want to take things further, various avenues could be proffered. One that I find quite helpful is the brief 2007 volume by David Pawson, Is John 3:16 the Gospel?

He does a quite helpful job of nailing down just what the gospel is, how we are to understand the love of God in general, and this much used passage in particular. I commend it to you to get more of a handle on these vital topics.

Again, I realise I may have opened myself up for some heated discussions here. That is fine, but as always, keep it civil, keep it biblical, and keep it presented with a humble and teachable spirit. That is the best way to proceed here.

14 Replies to “On the Discriminating Love of God”