It is getting to be rather dangerous to try to speak your mind in today’s PC-heavy climate. It can cost you everything. It will certainly cost you your head if you live in a Muslim-majority country, and increasingly it can cost you your life even in many Western countries. 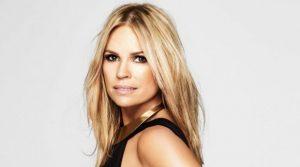 It will certainly cost you your reputation, your livelihood, your career in the West. As one Australian television personality has just discovered, to dare to speak about Islam and warn of its dangers can unleash a whirlwind of hatred, abuse and fury from the PC crowd and all the clueless dhimmis out there.

I refer to Sonia Kruger who is now being hammered by all the usual suspects for simply stating a view on an important topic. And in this case, hers is a very prudent view indeed. She simply said that in the wake of all the horrific Islamic terrorist attacks all over the West, it may be time to slow things down and ease up on bringing Muslims into Australia.

All hell has broken out over her comments, and all the news outlets are now running with this story big time. It has become headline news all over the globe in fact. Here is how one media outlet describes the issue:

Media personality Sonia Kruger has called for Australia to stop taking in Muslim migrants. The Today show panel was addressing a recent article by News Corp columnist Andrew Bolt, which attributed terror attacks in France to the country’s intake of Muslim migrants. Ms Kruger, who hosts Today’s sister show Today Extra, said she had a lot of “peace-loving, beautiful Muslim friends”, but admitted she agreed with the controversial opinion piece.
“Personally, I would like to see it (Muslim migration) stop now for Australia,” she said. She referred to Japan, a racially homogeneous country with a low proportion of Muslim migrants, and pointed out that they don’t experience terror attacks by Islamic extremists. “I want to feel safe, as all of our citizens do when they go out to celebrate Australia Day, and I’d like to see freedom of speech.”
At this point, host David Campbell chimed in exclaiming: “I’d like to see freedom of religion as well, as well as freedom of speech! They both go hand in hand.” Referring to the Bolt column, he said: “This breeds hate. This sort of article breeds hate.” Ms Kruger responded: “I would venture that if you spoke to the parents of those children killed in Nice, they would be of the same opinion.” When asked by Lisa Wilkinson to clarify whether she was saying she would like Australian borders closed to Muslims at this point, Ms Kruger outright said: “Yes I would. For the safety of our citizens here, I think it’s important.”

So now it seems that every secular lefty and Muslim apologist on the planet wants her head on a platter. They are demanding that she recant, and she is getting all the usual bogus complaints thrown at her: she is a racist, she is a bigot, she is a hater, she is intolerant, she is blah, blah, blah.

Indeed, already we had Australia’s Race Discrimination Commissioner Tim Soutphommasane saying: “This stereotyping of Muslims does nothing but breed hate … let’s speak out against it”. Uh puh-leeese! What utter nonsense.

Last time I checked, Australia was a free democratic nation where one of our most basic of human rights was the right to free speech. Sonia Kruger has every right to share her concerns here. Indeed, with people being slaughtered all over the Western world by devout Muslims, it is about time someone started talking a bit of sense here.

Speaking the truth is not breeding hate. Refusing to speak the truth is however a hateful act – it simply allows more innocents to be blown up, decapitated, run over and shot by those who have declared war on the West. The simple truth is, Islam is a political ideology which has been spread by the edge of the sword.

It cares nothing about human rights, freedom, democracy, and genuine multiculturalism. It seeks only one thing: the establishment of a universal caliphate with everyone in either voluntary or enforced submission to Allah, and everyone fully subservient to sharia law.

Now that in my books is real hate. Warning against this is actually a loving thing to do. Kruger is quite right to be concerned about all this, as are millions of other Westerners. Too many innocent people have already died horrific deaths at the hands of devout Muslims.

Western governments must start doing a much better job of vetting those who seek to come into their countries. We are being foolish indeed to allow the free flow of those coming into our lands from Muslim nations go unchecked. If we do not take action now, we will keep seeing more of the Nice attacks, the Orlando attacks, the Madrid attacks, and the Brussels attacks, to name but a few, with many more innocent men, women and children slaughtered on our streets.

Of course not all Muslims are terrorists, but of late, basically all terror attacks have been done by Muslims in the name of Islam. The safety and protection of our citizens should always take priority over Political Correctness and cluelessness about the political ideology of Islam.

For stating her concerns, Sonia Kruger is being treated like dirt by all the usual fear-mongers, Islamophiles, and clueless wonders. She happens to be fully correct in what she has said, and I hope she emboldens many more to follow suit and speak up.

And of course it is better to speak up now while we still have the freedom to do so. Such freedom may not be around all that much longer the way things are going in the West.

109 Replies to “Sonia Kruger: Crucified for Speaking Some Truth About Islam”